Niels Goet, Thomas Fleming, and Radoslaw Zubek introduce a machine‐readable dataset of House of Commons Standing Orders between 1811 and 2015. They demonstrate how this can be used to measure procedural change, and thus substantially advance our understanding of legislative reforms.

Parliamentary rules have important consequences: they affect what kind of legislation gets passed and at what speed, who gets to speak and on what issues, and perhaps most importantly, who gets to control the agenda. The ongoing confrontation over Brexit between Parliament and Boris Johnson’s government has further highlighted the importance of parliamentary procedure as ‘rules of the game’ structuring British politics. This begs a number of important questions – how have the House of Commons’ rules developed over time? And what causes rules to change?

Until now, answering such questions has been difficult due to a lack of high-quality data. In our recent article, we introduce a novel machine-readable dataset of all the House of Commons’ formal rules – known as ‘Standing Orders’ – between 1811 and 2015. The data is freely available to view and download at ParlRulesData.org.

The dataset has two key features. First, it provides a new version of the Standing Orders for each date on which they were amended since 1811. Second, we have divided each version into small sub-articles of text, and have traced the evolution of these sub-articles across successive versions. This data thus allows us to systematically map, for the first time, how the House of Commons’ rules have evolved since the early 19th century, both as a whole, and for each individual sub-article.

Our dataset can be used to answer a wide variety of questions about how parliamentary procedure has changed over more than two centuries. Here, we focus on just three illustrative examples.

How have parliament’s rules expanded?

How detailed are the House of Commons’ rules, and how has this changed over time? Figure 1 charts the size of the Standing Orders since 1811, in terms of sub-articles and words.

This shows two clear patterns. First, the Standing Orders have substantially lengthened over time. They contained fewer than 5,000 words for most of the nineteenth century, but had reached nearly 50,000 words by 2015. Second, this growth has been uneven. A long period of gradual expansion was followed by much faster growth from the middle of the twentieth century. Even since the start of the 21st century, the Standing Orders have more than doubled in length.

When have parliament’s rules changed?

Of course, parliamentary rules are not simply added to over time; they are also subjected to changes. Our dataset allows us to precisely measure the size of these changes. Figure 2 shows the extent of reform to the Standing Orders since 1811. This is calculated by comparing the Standing Orders at the start and end of each parliamentary session and identifying how many sub-articles have been added, deleted, or changed.

As with Figure 1, this shows substantial variation over time. There have been periods of procedural stability, but also periods of substantial change. The latter match closely with those identified in existing literature, such as the early-twentieth century ‘Balfour’ reforms, or the ‘modernization’ reforms undertaken by New Labour.

What are parliament’s rules about?

Clearly the House of Commons has developed many more formal rules over time, and has amended them frequently. But what topics do these rules actually address? Figure 3 explores this by showing how often various terms have been mentioned in the Standing Orders over time. In particular, it shows the number of sub-articles containing words or phrases relating to the government (e.g. ‘minister’), Europe (e.g. ‘European’), committees (e.g. ‘select committee’), and specific parts of the United Kingdom (e.g. ‘Wales’). 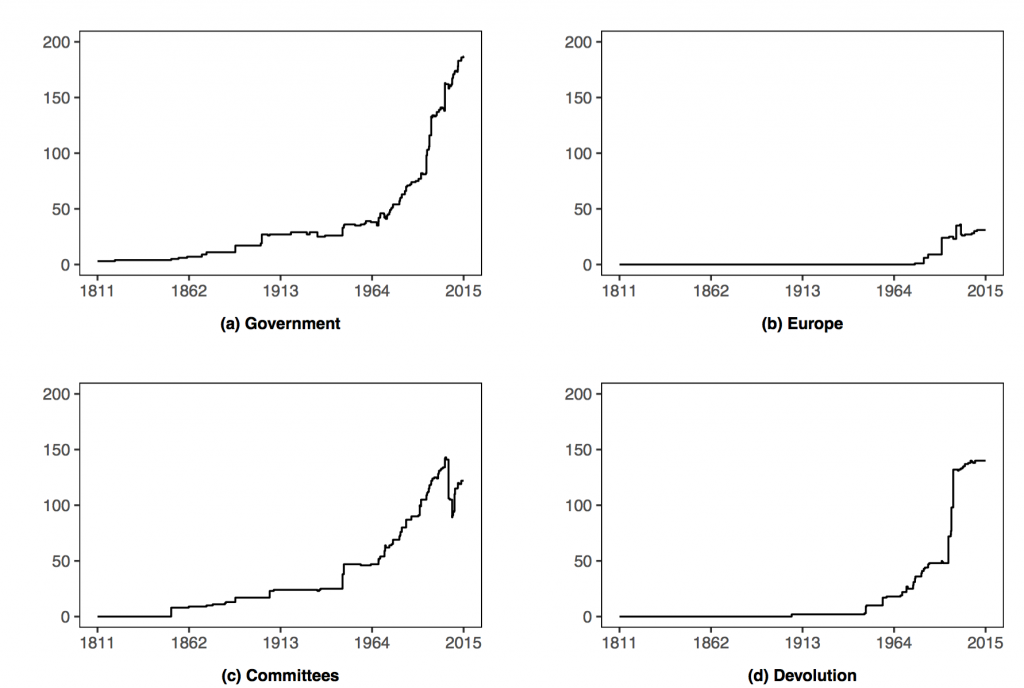 Figure 3 shows a number of interesting patterns. Comparing panel (a) to the others suggests that the role of the government has always had a prominent place in parliament’s rules, and has become substantially more regulated over time. Panel (b) shows that EU membership has had perhaps surprisingly little impact on the Standing Orders. At no point has Europe been mentioned in more than 50 sub-articles. By contrast, panel (c) shows that committees have become increasingly prominent in the Commons’ rules since the middle of the 20th century, and featured in more than 100 sub-articles by 2015. Finally, panel (d) shows how much attention the Commons’ rules have given to country-specific procedures. Though there were almost no such procedures until the middle of the 20th century, there has been a very stark increase in recent years. This illustrates how the Commons had procedures that only applied to specific parts of the UK, even before the recent introduction of ‘English Votes for English Laws’ (which is beyond the period covered by our data).

Overall, the UK ParlRules dataset allows us to explore the evolution of the House of Commons’ procedures in much greater systematic detail than has previously been possible. We have focused here on using it to show basic descriptive patterns in the rules – how they’ve grown, when they’ve changed, and what topics they cover. But the data can be used to explore a far wider range of questions, from simply seeing how the rules stood on a particular day in history, to testing complicated theories of why and when parliamentary institutions change.

Recent political developments have made it more important than ever to understand how the British parliament works. By making this data publicly available, we hope to make that task easier.

Note: the above draws on the authors’ published work in Legislative Studies Quarterly. ParlRulesData.org aims to make available historical, machine-readable records of parliamentary rules over prolonged periods of time. The UK House of Commons dataset, published in 2019, marks the first major ParlRules release, spanning over 200 years of UK parliamentary history. Over the coming years, we will extend our data-gathering efforts to other legislative chambers.

Niels Goet currently works as a data scientist at Inspera AS, an EdTech company based in Oslo, Norway.

Thomas Fleming is a DPhil candidate in Politics at Nuffield College, Oxford.