Stuart Wilks-Heeg looks at the history of the ‘hung parliament’. The related paper ‘Governing without majorities: coming to terms with balanced Parliaments in UK politics’ is now available from Democratic Audit.

To read Britain’s national press today, you would imagine that we had never before faced a situation where no single party gets an overall majority in the House of Commons, and that we’d always called this situation a ‘hung Parliament’. Yet neither of these things is true. Before the emergence of more tightly organised parties during the course of the nineteenth century, the idea of a single, fairly rigid group numerically dominating the Commons was unknown, so in this sense Parliament was always ‘hung’. Even in the era since mass parties emerged, so-called ‘hung Parliaments’ have been common, particularly in the late nineteenth and early twentieth century.

And as my first chart below shows, in fact the term ‘hung Parliament’ did not enter into common usage in the UK until the mid-1970s. Searches of media databases reveal that the results of the February 1974 General Election were initially described in The Times and The Guardian as ‘a balance of power position’, ‘a deadlock situation’ or a ‘stalemate general election’. The first use of ‘hung Parliament’ in the press appears to have been almost four months after the election, in an article in The Guardian by Simon Hoggart on 22 June 1974, while the term first appears in Hansard a full four years after the February 1974 election, in a speech made by Kevin McNamara MP on 6 March 1978. 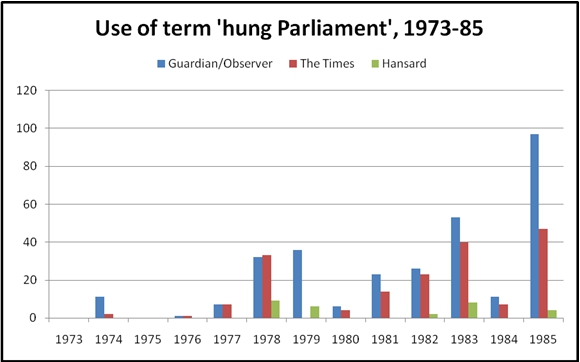 By the mid-1980s, the rise of the SDP had ensured that the term had become common currency. In 1987 and, then most obviously in 1992, my second chart shows that media discussion of a possible hung Parliament peaked.  With Labour commanding substantial leads in opinion polls after 1993, and huge majorities in the Commons after 1997, the term fell dramatically out of fashion. 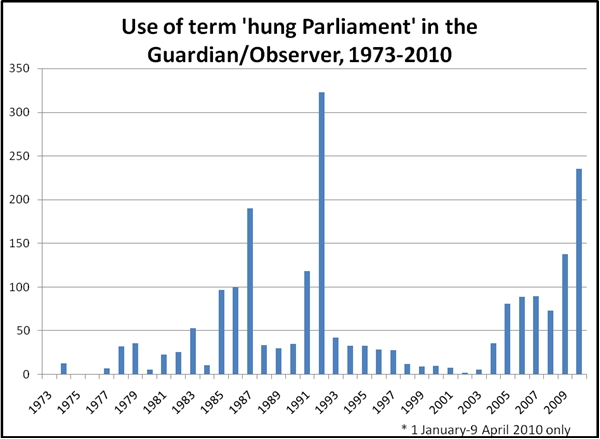 Now, even at this still early stage of the 2010 campaign, the prevalence of the term ‘hung Parliament’ already dwarfs its use during the last period in which Parliament was actually ‘hung’. The Guardian’s website records over 200 citations of ‘hung Parliament’ in its content for the first three months of 2010, while the same newspaper used the phrase just 21 times in the four years from 1974-1977.

Where did this awkward phrase come from? Its introduction in British politics appears to have been based on an adaptation of the US expression ‘hung jury’, used to indicate a situation in which a lack of agreement among jurors requires them to be dismissed and a second trial with a new jury established. Hence, the House of Commons elected in February 1974 gradually came to be described as ‘hung’ by commentators as it became clear that, as the head of a minority Labour government, Harold Wilson was likely to dissolve Parliament once more and call a fresh General Election in the hope that a majority government would be returned.

February 1974 was not the only general election in the past century at which no party achieved a majority – although the Cabinet Office’s interpretation of constitutional precedent might suggest otherwise.  Four other twentieth century general elections resulted in no overall majority – January 1910, December 1910, December 1923 and May 1929. Of course, with the exception of the minority Liberal administration of 1910-15, minority governments have generally been short-lived. The possibility of calling another immediate election to seek a ‘clear mandate’ from the electorate, rather than working with the existing House of Commons, has usually been too much of a temptation to a Prime Minister in such circumstances. In the past it also had at least some democratic credibility to it.

But things have changed. The claim of today’s single-party governments to have a clear mandate has been fatally undermined by the ‘double-whammy’ of falling levels of support for the two main parties and the sharp decline in turnout from 1992 to 1997, followed by a trend towards disengagement. At the high-water mark of the two-party system, the Conservatives won the 1951 election with the support of 40 per cent of all eligible electors; when Labour took office after the 2005 election, the party’s total vote amounted to just 22 per cent of the electorate.

Whatever the jitters in the markets, a hung or ‘balanced’ Parliament should not be feared. Of course, some serious constitutional questions could be raised by an indecisive electoral outcome. But these are questions that the UK needs to resolve sooner or later, as a trend to multi-party politics gathers momentum. And there is no reason why Parliament should not be able to resolve these issues.  It’s time we learned to live with them, and for that we may need to coin a new phrase – ‘a negotiating Parliament’ as David Owen put it when he was leader of the SDP, or a ‘balanced’ Parliament, as the Liberal Democrats and Scottish Nationalists are inclined to describe such a situation today.

Dr Stuart Wilks-Heeg is Director of the research and campaign group Democratic Audit and a Senior Lecturer in Social Policy at the University of Liverpool. He was an undergraduate and M.Sc student in the LSE Department of Government and gained his PhD at the University of Liverpool. He has written extensively on local government and urban politics in the UK. He is the author  (with S. Clayton) of Whose Town is it Anyway? The State of Local Democracy in Two Northern Towns (York: Joseph Rowntree Charitable Trust, 2006).