University as a ‘public good’? Only for those who never went…

University as a ‘public good’? Only for those who never went…

Using data from the last 30 years, Steven Jones and Anna Mountford-Zimdars examined public attitudes towards participation in higher education. Despite questions being framed in ways that increasingly constructed university as a public expense, they identified a persistent belief in the core values of Higher Education. Among some of the surprising results, they found that graduates were more than twice as likely to favour a reduction in participation as non-graduates.

In an era of rising tuition fees, deepening student debt and the global commodification of learning, any remaining notion of Higher Education as a ‘public good’ may seem improbable. However, evidence from the British Social Attitudes survey shows that the broader, society-wide benefits of Higher Education are still prized, albeit not always by those you might expect.

Together with colleagues from Oxford and London University, we examined surveys from the last thirty years to chart how public attitudes towards participation have reflected changes in policy. Despite questions being framed in ways that increasingly constructed university as a public expense, we identified a persistent belief in the core values of Higher Education. For example, 43% of those surveyed in 2010 thought that over half of young people should go on to university, a finding at odds with popular perceptions of a labour market saturated by graduates of ‘Mickey Mouse’ degree programmes.

More surprising, Higher Education was cherished most highly by those from lower social classes. Only 10% of working class respondents thought opportunities should be reduced, compared to 26% among the professional and managerial classes. We also found gender and school type to be key predictors of attitude. Men were more likely than women to say that university isn’t worth the time and money, as were those educated privately. But the strongest predictor was whether respondents had themselves participated, with graduates more than twice as likely to favour a reduction as non-graduates. Those who profit most from Higher Education, it would seem, are those most inclined to pull up the ladder behind them.

Chart 1: Attitudes towards higher education opportunities, by the qualification level of respondents 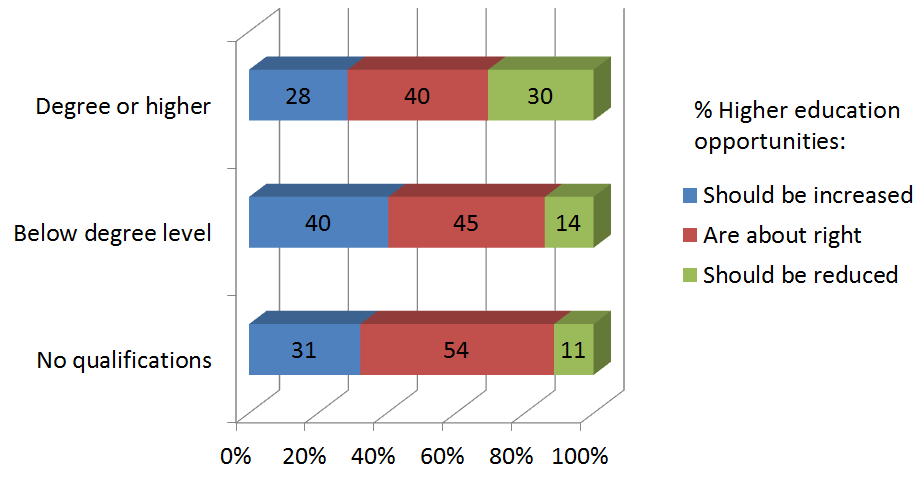 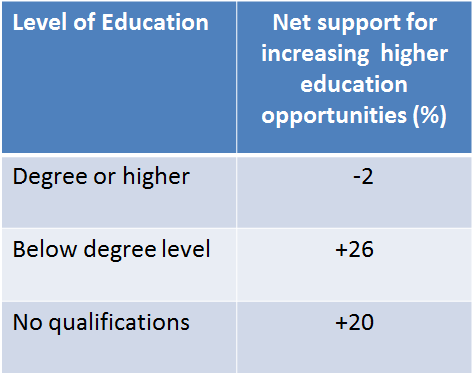 Note: Column 2 shows the % respondents saying higher education opportunities should be increased minus % saying they should be reduced

Of course, such are the private benefits of Higher Education for many graduates that public funding for universities could be regarded as little more than a middle class subsidy. However, this frames debates within the narrow, individualistic terms of human capital, problematic not only because different degree programmes yield different income ‘premiums’, but because, for some students, the value of a degree isn’t solely economic – it’s also about personal growth and the chance to become part of a better-educated, fairer society.

Self-interest is increasingly assumed to be the main driver for Higher Education participation, with students constructed as savvy consumers and debt justified in terms of enhanced lifetime earnings (or repayment concessions for those less fortunate). But against this tide of marketisation, support for Higher Education as a public good lingers.

Dr Steven Jones is a Senior Lecturer at the Manchester Institute of Education. He blogs at Missing 3,000 and tweets as @StevenJones_MCR

Dr Anna Mountford-Zimdars is a Lecturer in Higher Education at King’s College London and a contributor to academic and public debates.