A large literature in behavioural and social sciences has found that human wellbeing follows a U-shape over age. Some theories have assumed that this is caused by unmet expectations that are felt painfully in midlife but abandoned with less regret during old age. In a unique panel of 132,609 life satisfaction expectations matched to subsequent realizations, Hannes Schwandt presents findings that support theories that unmet expectations drive the age U-shape in wellbeing.

Behavioural and social scientists have shown increasing interest in self-reported life satisfaction and other subjective indicators as measures of human wellbeing. Using these measures a large and emerging literature has established that wellbeing follows a U-shape over age. Even though some controversy remains over the existence of this U-shape, it has been observed in over 50 nations, across socio-economic groups and recently also for great apes. Little is known about its origins. One theory is that the U-shape is driven by unmet aspirations which are painfully felt in midlife but beneficially abandoned later in life. A complementary theory builds on the neuroscientific finding that the emotional reaction to missed chances decreases with age so that the elderly might feel less regret about unmet aspirations.

Assuming that regret about unmet aspirations drives the U-shape implies that people err dramatically in predicting their wellbeing over the life-cycle. When young, people expect a bright future though actual wellbeing decreases. In old age expectations are adjusted downwards though actual wellbeing is rising. Human belief formation is known to exhibit systematic biases such as optimism and the underestimation of hedonic adaptation to changes in life circumstances. However, existing literatures typically analyze specific forecast settings with less emphasis on overall wellbeing measures or the role of age. The extent to which people err in predicting changes in their wellbeing over the life-cycle is unknown. 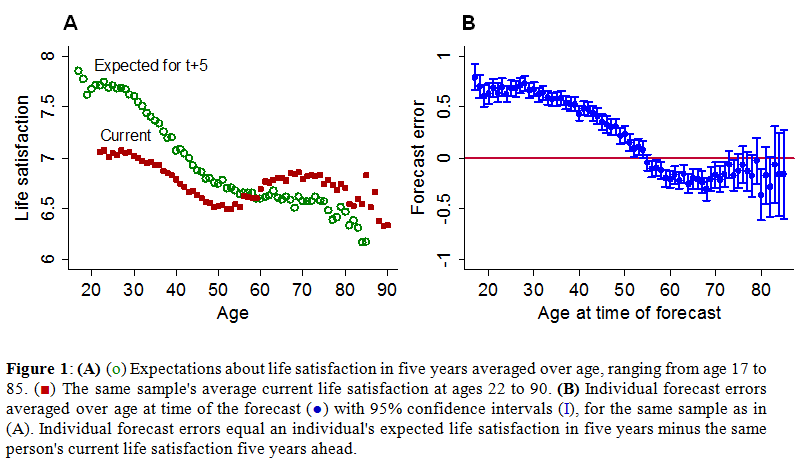 Figure 2 shows that the age pattern in life satisfaction forecast errors is remarkably stable over time, regions, and socio-economic subgroups. 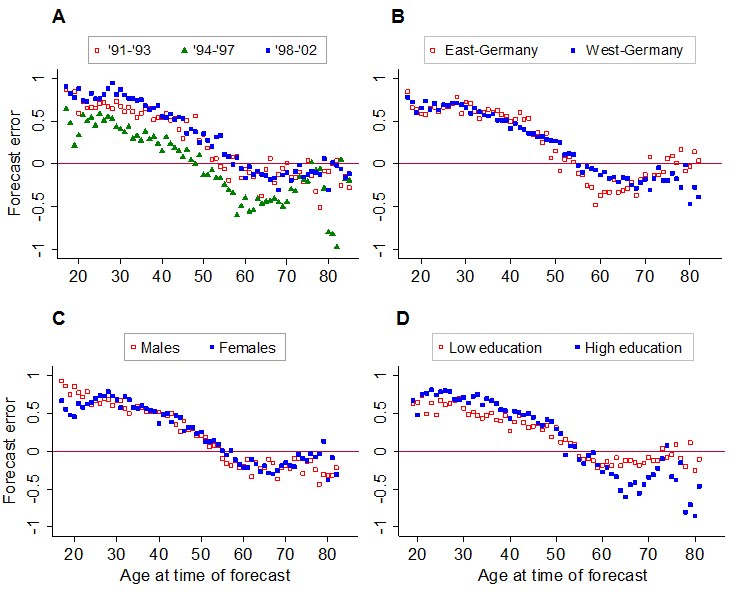 These findings show a striking age-associated bias in life satisfaction forecasts. The young strongly overestimate their future life satisfaction while the elderly tend to underestimate it. The similarity of the observed patterns across regions and their stability over time indicate that the findings might be generalisable to other developed countries in other decades.

What are the causes underlying this age bias? One well known source of systematic forecast errors is that people underestimate how quickly they adapt to socio-economic changes such as changes in income. Thus the observed age bias could be generated by the young expecting too much from anticipated income increases with the elderly, who face decreasing incomes, committing the opposite error. In the data, forecast errors indeed roughly match with the average income profile which is increasing during young adulthood and decreasing after age 50. Further, the age bias is slightly more pronounced for the highly educated who have steeper income profiles than those with less education.

However, the remarkable similarity across economically and culturally distinct regions and across gender suggests that some of the causes of the age bias go beyond age-related socio-economic characteristics. It is well established finding in psychological research that people tend to overestimate the likelihood of positive events and underestimate the likelihood of negative events. For example, people expect to enjoy healthier lives than average or underestimate the probability of being divorced. Optimism bias has also been demonstrated in non-human animals. Neuroscientific research has accumulated broad evidence that this bias is generated by selective processing of negative and positive information in the frontal brain which allows people to maintain biased expectations when confronted with discomforting evidence. This might provide a biological explanation for why life satisfaction expectations are overoptimistic during much of adulthood and adjust only slowly over time. It does not explain, though, why expectations remain stable after midlife while actual life satisfaction increases, implying negative forecast errors during old age. However, little is known about optimism in old age and existing evidence is conflicting.

How do the age associated errors in expected life satisfaction documented here relate to the age U-shape in wellbeing? Some theories have assumed that the U-shape is driven by unmet expectations that negatively affect people’s wellbeing in midlife but are abandoned and experienced with less regret during old age. The data reported here support this notion. Young adults have high aspirations that are subsequently unmet. And their life satisfaction decreases with age as long as expectations remain high and unmet. Aspirations are abandoned and expectations align with current wellbeing in the late 50s. This is the age when wellbeing starts to rise again. Further, given the disappointed expectations accumulated until that age, it is possible that wellbeing increases if the elderly learn to feel less regret (10). Following this interpretation of the U-shape in wellbeing, the observed negative forecast errors during old age might indicate that people do not anticipate the wellbeing enhancing effects of abandoning high aspirations and experiencing less regret.

Disseminating the knowledge of age associated forecast errors in life satisfaction could help people adjust their expectations, optimize important decisions in their life and suffer less when aspirations are not met. This might weaken the midlife drop in life satisfaction.

This article summarises CEP Discussion Paper No 1229; “Unmet aspirations as an explanation for the age U-shape in wellbeing“.

Hannes Schwandt is a Postdoctoral Research Associate at the Center for Health and Wellbeing at Princeton University. He is also a visiting researcher at the Center for Economic Performance at the London School of Economics and a research affiliate at IZA. His primary research fields are Health Economics and Labor Economics. His secondary research interests include Applied Microeconometrics and Behavioural Economics.