The 2016 Budget was more about keeping businesses and Conservative backbenchers happy than about economics, writes Vince Cable. Here, he explains how the government’s aversion to borrowing for public investment jars with its rhetoric about infrastructure, while warning that some of the business tax changes are laudable.

The 2016 Budget had far less to do with economics than with keeping business and Conservative backbenchers happy in the run up to the June EU referendum. That is an entirely sensible set of priorities since the economic shock of Brexit potentially exceeds by far any impacts likely to arise from the Budget. The Budget had, nonetheless, two significant points of economic policy interest. The first was a surprisingly radical set of proposals around business tax and the second was the, expected, commitment to stick to fiscal targets however wrong-headed. The two are linked through some heroic assumptions about the yield from corporate tax changes.

Osborne’s commitment to run a ‘budget surplus’ by 2019/20 involves a redefinition of budget balance since fiscal consolidation was set out in the 2010 Coalition Agreement (or, before that, the ‘Darling Plan’). The aim then was to achieve a structural balance (that is, after evening out the effects of temporary, cyclical fluctuations) on the budget’s current account: revenue less current expenditure. Osborne uses a different, and much more restrictive, fiscal objective: to eliminate all government borrowing whether for current or capital spending.

The practical implication is that there is a sharp and tightening squeeze on public investment at a time when borrowing for public investment has never, historically, been cheaper with interest rates close to zero in real terms on long term public borrowing. Moreover, financially prudent and disinterested bodies like the IMF are calling for the UK to be more expansive in public investment. In a recent paper, Why Governments Won’t Invest, I discuss at greater length the Chancellor’s commitment to a fundamentally irrational, damaging approach to public finance. 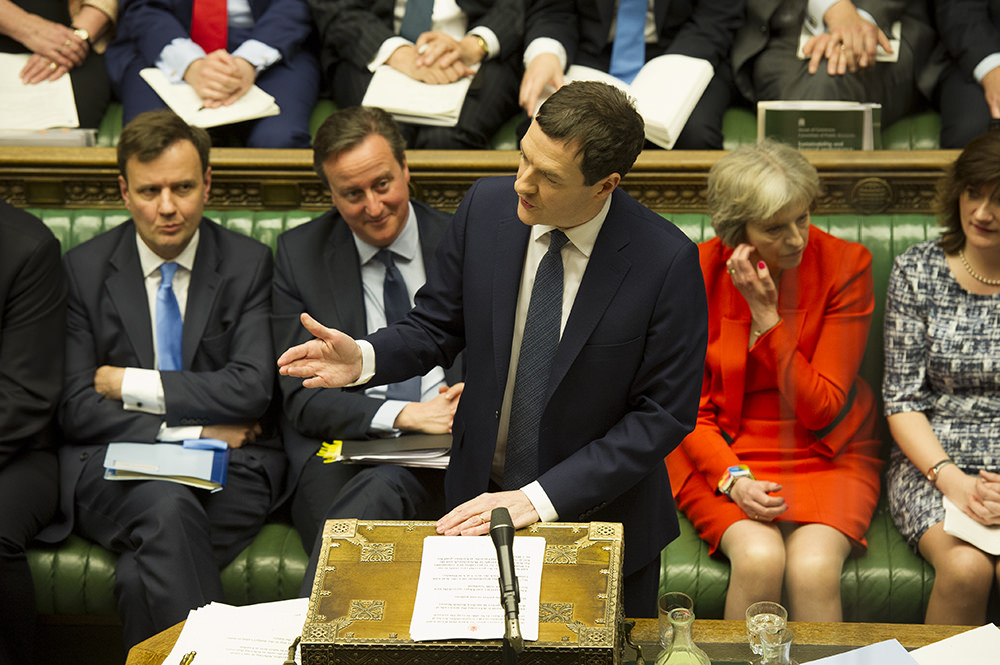 This aversion to borrowing for public investment also jars badly with the enthusiastic rhetoric about infrastructure. The Chancellor clearly believes in ‘les grands projets’ and waxes lyrical about HS2, HS3 (the trans-Pennine rail route which is the transport hinge of the Northern Powerhouse) and CrossRail. These projects are however many years away from realisation and – without government funding – there is no financing mechanism agreed or in prospect. Meanwhile, smaller, less glamorous and ambitious, projects which may have a higher and quicker pay-back are being severely rationed and postponed. This dichotomy between rhetoric and reality was already apparent under the Coalition when only a tiny proportion of the National Infrastructure Plan was progressing on target and new financing streams like pension fund investment never materialised.

The Chancellor’s insistence that the 2019/20 budget target will be hit despite the projected slow-down in the economy (to a, somewhat optimistic, 2.1 per cent growth) also goes contrary to the more flexible approach employed during the Coalition years. When the economy slowed, as it did in 2011/12, and recovery was threatened, he (we) adopted a counter-cyclical approach, postponing deficit reduction until the economy turned up, as it did. This time, borrowing will be allowed to rise for a couple of years – sensibly – but the target has not been changed to reflect changed circumstances. Another round of spending cuts has been pencilled in-worth £4 billion per annum- concentrated on the usual suspects, like local government services, and welfare payments to the disabled.

One further consequence of adopting a more austere approach to deficit reduction than the Coalition is that the present government is more reliant on the Bank of England pursuing loose money policies to support demand. Yet there is growing concern, not only in the UK, that such policies are having serious negative side-effects, not least the inflation of asset markets such as housing.

One of the biggest uncertainties in the budget is the revenue impact of the ambitious cuts in business tax, especially corporation tax (20 to 17 per cent) and capital gains tax (28 to 20 per cent for the main rate). Some of the business tax changes are laudable. I have long argued for creating a threshold lifting very small companies out of business rates and this appears to be in train. The cut in corporation tax rates is more questionable. The UK is already at the bottom end of major economies.

The scope for attracting more businesses, and tax, from Ireland or Luxemburg is very limited and nothing like the expected revenue loss from existing UK based companies. Of course there is need to incentivise private investment but corporation tax rates (as opposed to investment allowances) are a very blunt instrument for doing so. It is possible that parallel measures to remove complex reliefs will offset the revenue loss from lower rates. But the revenue arithmetic is very strange and involves losses of £10bn over two years with gains of £10bn for the following two years. The range of potential error is very large.

The capital gains tax cut is a roundabout way of encouraging companies and wealthy individuals to plough back capital into business growth. What it will certainly do is encourage tax avoidance as people paying top rate income tax at 45 per cent seek to convert their tax liabilities into capital rates of 20 per cent. Accountants will be kept busy by tax arbitrageurs. Recent experience also suggests that there are better ways to encourage entrepreneurs through EIS/SEIS reliefs for start-ups and then entrepreneurs’ relief to foster growth. With hindsight it was a mistake to abolish taper relief which would have incentivised longer term investment. Where Osborne does deserve credit however is keeping higher CGT rates on property to discourage second-home ownership; the rate should have been increased, given the appalling imbalance between supply and demand in the housing market.

To conclude with a political point, Osborne’s focus on winning the referendum will have been advanced in the business community. I suspect however that the millions of people who are not politically aligned with the government may now be less inclined to turn out to follow the government’s lead on Europe.

Note: This post was originally published on LSE Business Review and is based on the author’s paper Why Governments Won’t Invest.

Sir Vince Cable is Professor in Practice; Institute of Global Affairs, LSE, and Former Secretary of State for Business, Innovation and Skills (2010-15).