Andy Coulson, former editor of the now defunct News of the World tabloid and David Cameron’s former communications chief, has been found guilty of conspiring to hack phones. His co-defendant, Rebekah Brooks, has been cleared of all charges. Charlie Beckett believes the verdict places more of a burden on editors to cultivate a culture of responsibility and accountability in their newsrooms.

The verdict in the phone hacking trial raises an interesting question: how much do editors know about what happens in their newsrooms? I think the problem at the News of the World was symptomatic of a certain period in tabloid journalism. The problem in that newsroom was particular to the people involved and perhaps the proprietor, too. But even allowing for the exceptionalism of this case, there is a wider issue about journalistic leadership.

New production processes mean that it is both easier and harder to track what your journalists are doing. You can see live data on what is being written and read. But most newsrooms are producing much more material around the clock and often live. Luckily, online makes it easier to correct mistakes as you go, although the errors may well live on somewhere in the digital ether.

But the kinds of journalism – usually investigative – that tend to create serious legal and ethical issues are always going to be problematic. It is in their nature that they will upset people and challenge power, so you should expect push back. It is also in the nature of investigative journalists to take risks, cross bureaucratic borders and swarm across ethical grey areas.

As the BBC has discovered, editorial errors are not only driven by the pursuit of profit. Competition is what makes British (or any other) journalism great. The desire to beat your colleagues or rivals to scoops is what produces the cutting edge and often edgy journalism for which the public pay their subscriptions or fees.

Editors can not know what all their staff, freelancers, columnists, researchers, stringers, commentators, tweeters etc are doing all the time. You can have codes, guidelines and regulations, but in the end this is about culture.

A completely risk averse culture would be the death of decent journalism. I’ve written elsewhere about why we need a news media that can make mistakes but how that right must be balanced with ethical responsibility. I don’t think that will come through statutory regulation [I explain why not here] but through a combination of improved independent self-regulation and above all a change in culture.

The latter is already happening. This verdict might hasten the process. In the past papers could laugh off libel costs with their huge profits. No more. In the past they could ignore the damage done to their brand and shareholder sentiment by newsroom scandals. Not so any more when publics and advertisers are increasingly sensitive. So while editors will never be omniscient in their newsrooms – and they should not be either – they will now have to be leaders who cultivate a culture of responsibility and accountability.

Note: This article was originally published on the LSE’s POLIS blog and gives the views of the authors, and not the position of the British Politics and Policy blog, nor of the London School of Economics. Please read our comments policy before posting. Featured image credit: Surian Soosay 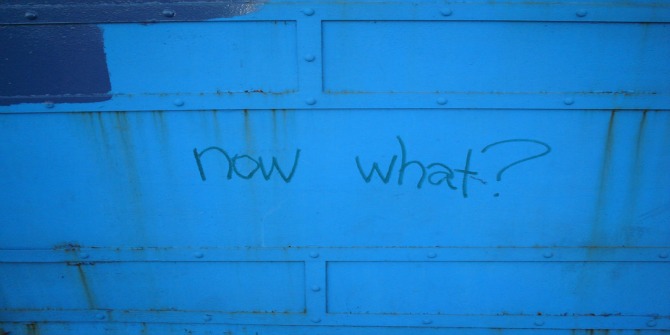