With concerns about immigration and integration a hot political topic, many point to the data showing that places with large increases of ethnic minority populations witnessed the greatest loss in white British population as a sign of distaste for diversity. However, research by Eric Kaufmann and colleagues into the spatial dispersion of white British and ethnic minority populations casts doubt on the white flight hypothesis.

The issue of Bulgarian and Romanian freedom of movement has acted as a lightning rod for popular discontent about immigration in Britain. Immigration is often linked to concerns over integration, and the electorate has consistently ranked immigration and integration issues among their top concerns since 2002.

One litmus test of integration is spatial dispersion. In this context, the 2011 census results, released in late 2012, produced some worrying indicators. In particular, data showed that places with the largest increase in ethnic minority populations witnessed the greatest loss in white British population. London, for example, gained over a million people during 2001-11 but lost 620,000 white British at the same time. Moreover, across England and Wales, 38 Local Authorities simultaneously made the top 50 list for greatest decline in white British numbers and largest increase in ethnic minorities during 2001-11. White flight is the explanation favoured by some on the nationalist right, who see this as a sign of white distaste for diversity, as well as on the New Left – for whom white flight represents a prime example of the new ‘covert’ or aversive racism. The free market right and neo-Marxist Left prefer to speak of counterurbanisation, in which the hidden hand of economic forces or material self-interest is at work.

Gareth Harris and my ESRC-sponsored research in association with Birkbeck and Demos finds some merit in both arguments. Yet neither white flight nor counterurbanisation captures what’s going on. Consider the plot of wards (population 10-30,000) in England and Wales in figure 1. 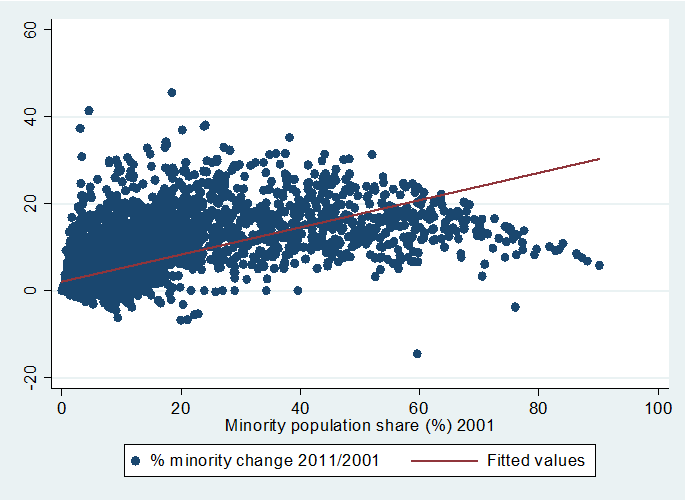 The upward slope of the red fitted line shows that those which had higher shares of ethnic minorities in 2001 (horizontal axis) experienced a larger point increase in their minority shares (vertical axis) over 2001-11. This is perplexing since the lower the share of minorities in a ward, the greater the room to increase percentage share. Counterurbanists see this as a function of income: minorities are poorer and hence less able to leave undesirable areas, which happen to be more heavily minority to begin with. Proponents of white flight suggest white discomfort, or racism, repels them from diversity toward white areas. 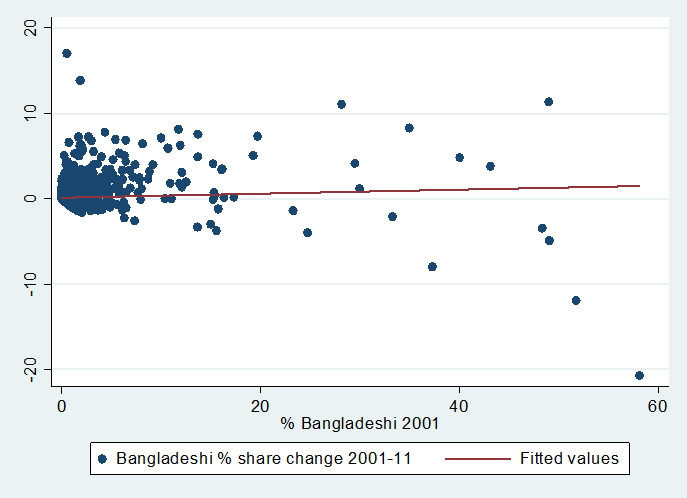 Now the line is virtually flat. This means Bangladeshis are barely more attracted to Bangladeshi wards than non-Bangladeshis are. The slope of the Pakistani line is positive, but much less so than for minorities as a whole, while the line for Afro-Caribbeans is strongly negative suggesting outright dispersal. All told, the story is that minorities, when treated as a single category, are attracted to minority areas and whites to white areas, yet individual minority groups are not sticking together.

Indeed, in a study of aggregate patterns, Ron Johnston and his colleagues show that the main ethnic minority groups are dispersing from their areas of concentration. This is clearly evident in maps of the location of ethnic groups in London between 1991 and 2011 prepared by Gareth Harris. Yet obtaining a clearer picture of whether age, class, ethnicity or some other factor drives ethnic movement requires information on individuals, not just areas. And we need longitudinal data that tracks people over time. Accordingly we use two world-leading datasets, the ONS Longitudinal Survey (ONS LS) and British Household Panel Survey (BHPS)/Understanding Society (UKHLS). Both are under scrutiny and the ONS LS in particular needs to be defended from government proposals to shelve it in the name of short-termism.

These show that while minorities are dispersing from their concentration areas, they are also – relative to whites – avoiding the heavily white wards which comprise 80 percent of England and Wales. Thus for minorities the big destinations are ‘superdiverse’ mixed-minority areas such as much of Newham in East London. Britain’s minorities generally live in different parts of the country, and in different sections of London – Indians around Leicester, Pakistanis in the West Midlands and Bangladeshis in Tower Hamlets, for instance. Yet these groups are drawing closer together: segregation has fallen fastest between minorities, such as Pakistanis and Bangladeshis. Whites and individual minority groups such as Bangladeshis are also less segregated however segregation between white British and minorities as a whole shows little decline.

Two other big trends stand out in our data. First, minorities are generally bypassing heavily white areas. There is a modest flow of minorities into the 80 percent of England and Wales that averages 96 percent white but a significant chunk of minorities who lived in these white areas left in the 2000s. Second, white British people are avoiding superdiverse wards. Is this not white flight?

Well, not exactly. Our work with the invaluable, endangered ONS LS census records finds that certain kinds of white British people move to diverse wards: renters, those relocating to London, twentysomethings and whites in mixed-ethnicity households. Yet the bigger white flow is in the opposite direction, toward white areas, dominated by those with children, homeowners, whites in mono-ethnic households and those leaving London. Minorities also tend to move toward diversity when in their twenties and away when they have children, but the life cycle pattern is not as sharp as for the white British.

Why are whites leaving diversity so much more than minorities? Counterurbanisation doesn’t explain the pattern since working and lower-middle class white British opt for homogeneity more than their professional/managerial counterparts.

White flight is unpersuasive because white British people who ticked the ‘English only’ national identity box on the census move from diverse to white areas – and vice-versa – at the same rate as those who chose British or a Celtic option. We know an English national identity is, for whites, associated with stronger anti-immigration attitudes and a greater propensity to vote for an anti-immigration party. The share of English identifiers among white British people in a Local Authority is, for instance, the strongest predictor of UKIP vote share in the 2010, 2011 and 2012 local elections. In order to explore this further, we repeated the exercise with the BHPS/UKHLS where there is a wider range of attitudinal measures. White British who vote conservative and those who vote Labour or Lib Dem move to white and diverse areas in equal measure. So do whites with conservative and liberal views on homosexuals, women’s roles, patriotism and redistribution. Ditto for white tabloid and broadsheet readers. So whites who prefer white areas are no more conservative than whites who plump for diversity, casting doubt on the white flight hypothesis.

Keen to explore determinants of movement with racial attitude questions, we commissioned a YouGov survey in August 2013 which asked people whether they moved ward in the past ten years, and if so, from a ward with more, less or similar diversity. We netted around 1700 white British respondents of whom about 200 said they had moved to a more or less diverse ward over the past decade. Whether the question asked about comfort with a boss of a different race or a Prime Minister of a different race, anti-immigration views or neighbourhood minority comfort thresholds, the result was the same. Namely, that racial and immigration attitudes had almost no effect on white mobility. Only at the conservative extremes did attitudes affect behaviour, but this was a marginal effect operating on 1 or 2 percent of the sample.

Commenting on our results in the Guardian after hearing our seminar at the National Institute for Economic and Social Research (NIESR), Hugh Muir suggests the evidence points to culture rather than race or income. We controlled for the urbanity and affluence of wards but not for their cultural capital. Karl Deutsch’s concept of the prestige direction of assimilation and Pierre Bourdieu’s notion of cultural capital suggest wards exert an ethnically-specific allure, regardless of physical amenities. White areas have some appeal for minorities provided they are not – like most of England and Wales – so white as to be intimidating; but diverse areas attract white British people only when they are in their twenties. The prestige direction of assimilation is toward the white British core, which accounts for why whites tend to choose whiter places when they move. White attraction rather than repulsion seems therefore to be the story.

Eric Kaufmann is Professor of Politics at Birkbeck College, University of London. He is the author of Shall the Religious Inherit the Earth (Profile 2010), The Rise and Fall of Anglo-America (Harvard 2004), The Orange Order (Oxford 2007) and Unionism and Orangeism in Northern Ireland since 1945 – with H. Patterson (Manchester 2007). His current ESRC grant, affiliated with the think tank Demos, examines white working-class responses to diversity in the UK. He may be found on twitter at @epkaufm.

What comes after the Elsevier boycott? The answer might be found by following the ‘Green’ road to open access 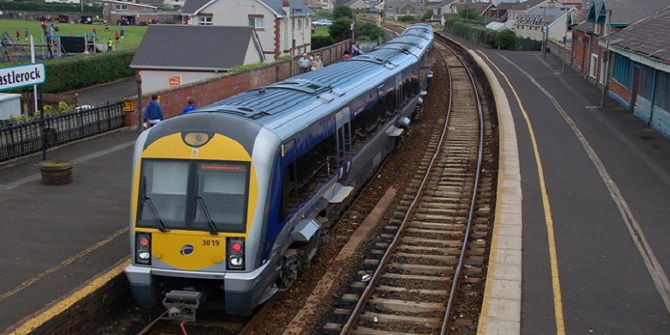 A Barrier or Bridge? Serious problems revealed in the UK citizenship test