A new movie documenting the struggle for women’s emancipation is a rarity; the suffragette movement is hardly ever dramatized for television. Shoulder to Shoulder, a BBC mini-series which is celebrating its fortieth anniversary, is the last time a story about the historic political struggle aired on TV. But why is the series buried in the BBC archive? Janet McCabe and Vicky Ball write that remembering this series is not only about reclaiming stories about the feminist struggle, but also about who has the power to tell them.

Helena Bonham-Carter and Carey Mulligan recently marched through the corridors of parliament agitating for female suffrage during filming of the first commercial film to be shot inside the Palace of Westminster. In recreating what women did in that constitutional space to get the vote 100 years ago, Suffragette, written by Abi Morgan and directed by Sarah Gavron, brings that historic campaign back into public consciousness. While the struggle for emancipation shaped the political landscape in Britain in the early 1900s and changed irrevocably the position of women in society, it is a story that hardly ever makes it on to our screens; and it has been 40 years since we saw the suffragette movement last dramatized for television.

2014 marks the fortieth anniversary of the BBC mini-series, Shoulder to Shoulder, which focused on the activities of the Women’s Social and Political Union (WSPU), founded by Emmeline Pankhurst and her daughters, Christabel and Sylvia (1898-1918). It consisted of six specially written plays and it came about through the collaboration of three women: the actress Georgia Brown, filmmaker and feminist Midge Mackenzie and TV producer Verity Lambert. Its importance as a landmark BBC drama documenting the history of feminism and the emergent public voice of women is unquestioned. That said, the series seldom gets repeated and has never been released on DVD. This neglect prompts us to ask: why is such a politically important drama about women’s history still buried deep in the BBC archive?

It is well known that Emmeline Pankhurst was alive to the importance of capturing the media to help shape her political message; and some of the WSPU’s preoccupations—with the media, penal reform and direct action—chimed in with Britain in the early 1970s. The IRA bombing campaign (with the Price Sisters on hunger strike in Holloway prison—and forcibly fed), industrial strife and economic crisis meant that the series carried more than a whiff of controversy.

But maybe it was its feminism that lay at the heart of why Shoulder to Shoulder has been forgotten then and why we should remember it now. At the cast and crew reunion held at Birkbeck recently, both Siân Phillips and Angela Down, who play Emmeline and Sylvia Pankhurst respectively, admitted to knowing little about these women before making the series. While Phillips was politically active and involved in the trade union movement, she had no formal education about the Suffragettes.

She wasn’t alone. Midge Mackenzie spoke and wrote often of how the project grew out of her experience of filming the Golden Jubilee of Women’s Suffrage in 1968, when she discovered the story of how women won the right to vote had been “almost successfully erased from the history books. The women who fought for the vote had vanished from our history. Their writings were long since out of print and their newspapers buried in archives”. In good documentary fashion Mackenzie filled her book, which one feels was a response to the betrayal she somehow felt at having men write the TV series, with women’s voices—original experiences as expressed in the words of those taking part, from diaries, letters, memoirs, speeches, as well as newspaper reports and the Suffragettes own publications, Votes for Women and The Suffragette. 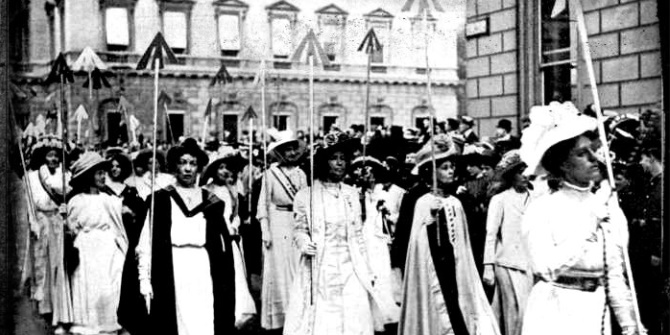 The series, like the book, focused on the militant campaign; but these Suffragettes were by no means the only campaigners demanding enfranchisement. Shoulder to Shoulder is a product of its time and, for example, it doesn’t address the contribution of other dedicated Suffragettes like Countess Markievicz, the first woman elected to Parliament, or Charlotte Despard, an Irish-based campaigner and Sinn Féin activist, for as Irish revolutionaries it probably was not the right time for reassessment as the troubles in northern Ireland still raged. And the non-violent, but constitutionally minded, Suffragists, led by Millicent Fawcett, barely got a look in either. But then committee work and letter writing is far less televisual than the drama of arson campaigns and bruising clashes with the police. What is rescued and recovered is not random, but the fragility of remembering the complexity of our history adds to ignorance and concealment.

But this is no excuse to forget Shoulder to Shoulder. Margaretta Jolly, Reader in Cultural Studies at the University of Sussex, has argued for using the Suffragettes to ‘measure new feminisms’ and of the importance of passing these stories onto the next generation, however difficult and contested. What the act of recovery from this entanglement of ‘official’ history and personal stories, public speeches and oral testimonies, teaches us is that the fight for equality didn’t end with enfranchisement—despite what post-feminism would have us to believe.

Remembering Shoulder to Shoulder isn’t only about reclaiming our stories, but about who has the power to tell them. Even within the production of the series there was a feminist struggle (of sorts) between an ideal and a challenging of power from the margins—Mackenzie, and a shattering of the glass ceiling and ability to change the script but from the inside—Lambert.

This remembering of the earlier fight for emancipation happened in the early 1970s at a time when a new feminism was struggling over questions of inequality, images of woman as Other and the culturally awkward position of women within the public sphere and their right to speak. Forty years later and we remain preoccupied with similar questions. Reconnecting voices and the experience of women and women’s history across time and space is crucial. Shoulder to Shoulder thus reminds us why the struggle still matters.

Note:  This article gives the views of the authors, and not the position of the British Politics and Policy blog, nor of the London School of Economics. Please read our comments policy before posting. Image credit: Julie Jordan Scott

Janet McCabe is Lecturer in Film and Television at Birkbeck, University of London