In areas of religious diversity, it is common to find community initiatives that bring together people of different faiths. As Dr Lindsay Simmonds writes, these interfaith interactions are situated within religious traditions, histories, and patriarchal structures. In this blog post, Dr Simmonds discusses women’s leadership in interfaith initiatives, particularly among the Orthodox Jewish community, where opportunities for women to lead and represent their community are limited.

Over the last decade, I have been privileged to work with several leading interfaith and conflict negotiation projects, including the Senior Faith Leadership Programme, the Council of Christians of Jews, the Abraham Initiatives UK, the LSE Faith Centre and Nisa-Nashim: the Jewish-Moslem Women’s Network. Additionally, I have travelled, together with leaders of other faith communities, to the Israel-Palestine region to engage in conflict negotiation and explore educational, professional and cultural ventures which work towards shared society. Here in the UK, many interfaith organisations bring together people of different faiths to study sacred texts, to collaborate on joint social justice projects, and to discuss and debate many topics of mutual interest and sometimes, topics of disagreement, fracture and conflict. Perhaps most importantly, these programmes bring people together to simply meet each other and chat, to get to know one another when, so often, even as neighbours, fellow students or co-workers, we may live very separate lives.

Whilst participating in these varied and eclectic programmes, I have noticed that the overriding experience is that of transformation — not only of the self, one’s biases and one’s preconceived ideas (however much we believe ourselves to be open-minded and outward-facing), but of the way we actually function in the world, the lens through which we perceive life and contribute to it — as individuals, as members of families and communities, and in our workplaces. I have experienced time and again the very fundamentals of human connection: that the meeting with an other to share ideas and to listen generates a collegiality. That collegiality leads to further conversations, those conversations lead to trust and building this trust leads to deep, long-lasting and meaningful friendships.

These interactions are always situated — in geographic space, in this moment in history, within our own personal and communal location, and within religious traditions and laws. Moreover, they are located within a cultural, often religious, patriarchal structure, and how women of faith navigate these spaces both demonstrates and generates their ‘positionings’ within these multi-layered frameworks. As an orthodox Jew and lecturer whose research focuses on issues of Gender and Judaism, it is of particular interest and importance to me to find out about, and advocate for, women’s involvement in interfaith work and conflict negotiation — both at the grassroots and leadership level, asking what impact they are having on the interfaith community. This question intersects with the challenges of women’s religious leadership roles in general, and in particular in the UK’s orthodox Jewish community.

To date, there are numerous examples of women who have founded and who lead British interfaith initiatives: the previous Director of the CCJ, Elizabeth Harris-Sawczenko, has now taken up the position of Director at the Good Faith Partnership; Laura Marks and Julie Siddiqi co-founded Nisa-Nashim; and the Rose Castle Foundation was founded by Canon Sarah Snyder, who now serves as its Director. Similarly, Rabbi Laura Janner-Klausner, who served as the Senior Rabbi to Reform Judaism until 2020, is a President of the CCJ and has worked with several UK interfaith organisations; and Rabbi Shoshana Boyd-Gelfand is a founding faculty member of Faith in Leadership, which provides leadership training to senior Muslim, Jewish and Christian leaders in the UK as well as Director of JHub, which offers training for social change organisations. Each of these women bring their expertise of their own faith communities (Christian, Moslem and Jewish) as well as their professional proficiency to ensure that these organisations reflect the needs of the British faith communities in which they work, as well as contribute to them and to wider society. But although this group of women includes religious leaders as well as lay-leaders, none is a religious leader within the orthodox Jewish community.

At their outset, many UK interfaith programmes selected participants with apposite titles — Bishop, Canon, Imam or Rabbi. Given that the UK’s orthodox Jewish community prohibits women from acquiring the title rabbi, they were inevitably excluded from this pool of representative clergy. This arguable requirement has been amended as interfaith programmes have developed and grown, and as they have become far better attuned to who is doing what within religious communities. Subsequently, they have widened the net they cast to attract a broader circle of community ambassadors. As a Research Fellow and lecturer for the London School of Jewish Studies, and as an orthodox Jew, I have been approached many times to participate in such programmes, as have several female orthodox colleagues who work as community educators, for philanthropic charities, in academia or in NGOs. But their (and my) professional expertise relegates them (and me) to lay-leaders, rather than as women who hold positions of religious leadership — and I want to highlight this anomaly and express my concern.

These honorific titles are not nominal — they are pregnant with religious meaning and imbue the title-bearer with religious expertise worthy of respect. These appellations represent years of religious study, of communal work, of religious commitment and of religious authority — none of which is intrinsic to ‘Director of’ or ‘Lecturer’ or even ‘Dr’. Do not misunderstand me — all communal grass-roots work and leadership ought to be represented and held in high esteem within the interfaith community. What I mean to convey is that orthodox Jewish women have no avenue for the possibility to represent religious leadership in the UK — a fact expressed most concretely through the lack of appropriate title.

I wonder — does this phenomenon impact on the ways in which orthodox Jewish women play a role in the interfaith sector, or might orthodox Jewish women’s leadership within the interfaith sector disrupt the current lack of leadership roles available for them within their own religious community? Given that interfaith work promotes collaboration, human connection and transformation, I am optimistic that orthodox Jewish women have found and will continue to find a home within the interfaith community that not only allows them to flourish as religious leaders, but encourages them to do so. And in so doing, I am hopeful that the rabbis of the British orthodox Jewish community, themselves involved in interfaith work, might be transformed by it to view their own religious power structures through a new lens. I am also hopeful that this work may encourage them to take the imaginative leap to appreciate what orthodox women have to offer their communities as religious leaders implicit in an appropriate and well-deserved nomenclature. To this end, I quote the late, great Jewish educator and my dear friend Maureen Kendler. On being asked about her insistence on remaining within the orthodox Jewish community, despite her serious concerns about women’s educational, ritual and leadership roles — she commented, ‘I’m not threatening to leave, much worse than that, I’m threatening to stay’.

Lindsay is a Research Fellow at the London School of Jewish Studies (LSJS) where she has lectured, written and convened courses for almost 20 years, focussing on women in Biblical narrative, the Talmud and Jewish Law. She has lectured for Kings’ College London, the United Synagogue and at Jewish communities throughout the UK. She speaks at national and international conferences on Judaism and Gender and is involved in several UK projects promoting orthodox Jewish women’s ritual participation and leadership. Lindsay has appeared on BBC Radio 4’s Woman’s Hour, Beyond Belief and the World Service, and held the annual post of Scholar-in-Residence at Hampstead United Synagogue in 2016-2017.

Posted In: Faith in Action | Latest 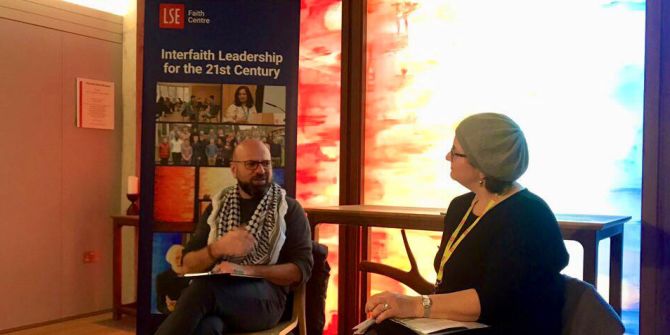 Sami Awad and Lindsay Simmonds in Conversation: Reflections on Leadership and Peacebuilding