H.H.S.Viswanathan argues that India’s ambitions of being a global power cannot be achieved without the support of the African continent. This is the first post of a two-week-long series on India-Africa relations.

While talking about Africa’s engagement with the outside world, some commentaries in newspapers refer to India as a newcomer to the continent. Nothing can be further from the truth. India’s relations with Africa are centuries old and pre-date the colonial era. In the centuries before the colonial powers came to India and Africa, there was flourishing trade between the west coast of India and the east coast of Africa. Colonisation affected contacts adversely. However, after the independence of India and the African nations, the momentum in engagement picked up. In fact, India was at the forefront of efforts for the decolonisation of Africa and the end of Apartheid.

India’s engagement with Africa has been founded on four important factors: first, there is a sense of solidarity with the African countries; second, there is no fundamental conflict of interests with any African country or the continent as a whole; third, there is a feeling of shared historical experience; and, lastly, there is a conviction that owing to the similar socio-economic conditions of India and many African countries, common solutions to prevalent problems can be found through collaboration.

In the 1960s, ’70s, and ’80s, India and the African countries collaborated effectively in many multilateral fora such as the Non-Aligned Movement (NAM), G-77, and the United Nations. This collaboration was a joint fight to ensure that the “third world”, as it was then called, was not marginalised.

Today, the India-Africa partnership exists at a different level because both India and Africa have changed in very dramatic ways. After the end of the Cold War, and particularly in the new millennium, there is a visible resurgence in Africa in both political and economic spheres—some have called it the African renaissance. Today, most African countries have embraced multi-party democracy, and the number of violent conflicts and military coups is drastically reduced. The economic resurgence is even more prominent: seven of the 10 fastest growing economies in the world today are in sub-Saharan Africa. During the last two decades, India has also become one of the world’s prominent emerging economies. These developments have provided the necessary foundations for taking the India-Africa partnership to higher levels.

The importance of today’s Africa for India is self-evident. India’s ambitions of being a global power with influence on global issues cannot be achieved without the support of the African continent consisting of 55 countries. Nowhere is the importance of African countries felt more than on the issue of the expansion of the UN Security Council. The need to engage Africa also arises from the large Indian diaspora of more than two million across the continent. And then there are the economic factors, including the availability of precious natural resources from Africa and the huge market with an expanding middle-class that Africa offers.

The recent growth in India-Africa trade is spectacular, and reflects the strengthening of the partnership. Trade expanded from a mere US$20 billion in 2005 to US$53 billion in 2010 and is expected to reach US$90 billion by 2015. India’s investments in Africa have also steadily increased, totalling US$50 billion, of which US$35 billion are from the public sector and US$15 billion are from the private sector. Approximately 250 Indian companies have investment linkages with Africa, including big names such as Bharti Airtel, Tata, Kirloskar, Mahindra, Bajaj, Essar group, NIIT, and Cipla.

The government of India, for its part, has taken pro-active measures to lay the groundwork for the private sector to take the partnership forward. The establishment of the India-Africa Forum Summits in 2008 was a game-changer. So far, two summits have been held; the first in New Delhi in 2008 and the second in Addis Ababa in 2011. Decisions taken in these summits have made a qualitative difference in the nature of engagement. For example, during the first summit, India unilaterally offered preferential market access to exports from 34 Least Developed Countries (LDCs) in Africa. The Lines of Credit (LOCs) in the two summits together amount to US$10 billion. In addition, US$300 million were earmarked for the Ethiopia-Djibouti railway line. The recent establishment of a dedicated Development Partnership Administration in India’s Ministry of External Affairs will help in speedy and effective implementation of the projects under LOCs.

India has always given great importance to South-South Cooperation, which rejects Western concepts of assistance based on the ‘donor-recipient’ model. India’s development partnership is based on three fundamental principles: India does not attach conditionalities, prescribe policies, or question sovereignty. Rather, the cooperation is driven by the demands of the partner country. India’s flagship initiative in Africa was the Indian Technical and Economic Cooperation (ITEC) programme, launched in 1964. This programme emphasised human resource development and capacity building, thanks to which thousands of young African men and women were trained in sectors like agriculture, accountancy, information technology, management and small and medium industries. In the first India-Africa Forum Summit, the number of ITEC scholarships was increased from the existing 1,000 to 1,500 annually. During the second summit, India committed to train 20,000 African students in the next three years. As a logical next step, it was decided to establish training centres in African countries and US$700 million were earmarked for this purpose. Another successful Indian project that operates on a continental scale is the Pan African e-network, which connects African hospitals and universities with their Indian counterparts to enable effective e-health and e-education.

India’s capacity-building initiatives in Africa, with their focus on investing in human capital, recognise that the continent is slated to be a major global manufacturing hub in the future—according to a 2010 McKinsey report, there will be 1.1 billion Africans of working age by 2040. This foresight, the natural complementarities between the Indian and African economies, and excellent political relations mean that the India-Africa partnership is destined to expand in the coming years.

Ambassador H.H.S.Viswanathan is a Distinguished Fellow at the Observer Research Foundation (ORF), New Delhi. He has been India’s Ambassador and High Commissioner to many African countries. The views expressed in this post are personal. 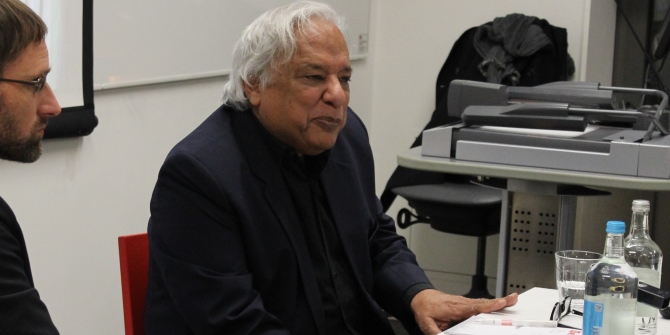 Bad Behavior has blocked 3697 access attempts in the last 7 days.