Although I said I’d try to focus on food, I’m already breaking my rule and will talk about the much buzzed 2012 US Presidential Elections.

Thank to one of my classmates, I had the opportunity to be an audience member for the BBC3 show Free Speech. It’s a live current issues debate show in which there is a panel and an audience. The audience participates, asks questions and interacts with each other and the panelists. What’s really cool is that because the show is live, they have an online aspect to it in which viewers at home can share their opinions that then show up on a large screen. There is a moderator who highlights particular online comments and the main moderator who facilitates the show. Since the show was covering the US presidential election, they wanted Americans in the audience, hence the opportunity. 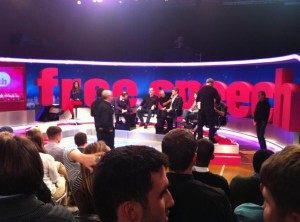 The show took place an hour and a half outside of London in Essex. Yet because it was rush hour, it took us three hours to get there. For some reason, I didn’t even think about the fact that I was going to be stuck on a bus with a group of politically opinionated Americans during rush hour before a debate show. However, we didn’t really talk about politics – we mostly talked about the differences between the States and the UK and had a very enjoyable ride.

Even though I lived in Los Angeles for four years, I had never been a part of a TV audience. The whole experience was really exciting and the show itself was great. I was a bit worried about how it’d go since it was a debate show shot live, but it was highly entertaining. It was neat to see how engaged everyone was with the debate.

Anyways, now that the results are out, I can return to living my life instead of keeping my eyes glued to CNN.com and BBC.co.uk. Oh and congratulations, Barack Obama!

The Genius of Sir Christopher Wren

Reflections on a first term at LSE

Creativity (and inspiration!) outside your writing

Bad Behavior has blocked 532 access attempts in the last 7 days.