Many commentators accuse government of being far too generous towards the poor, while others bemoan the lack of support for those in poverty. Max Rose and Frank R. Baumgartner have looked at how media commentary and government policy on poverty have changed over the past fifty years. They find that while the government and media had a sympathetic focus on poverty in the 1960s, by the mid-1970s this had shifted to a discourse around social wrongs, dependency and waste. This focus on dependency is now the dominant narrative, meaning that we are now no more generous towards the poor than we were more than 50 years ago, before the War on Poverty.

As the United States recently commemorated the 50th anniversary of the March for Jobs and Freedom on Washington, many in the media noted poverty’s comparative absence from today’s public agenda.

“What Happened to Jobs and Justice?” wrote William P. Jones in an op-ed in the New York Times. Jamelle Bouie, a columnist at The Daily Beast, noted that while President Obama’s speech focused on economic opportunity, he failed to note the need for solutions that focused on African Americans. ESPN columnist LZ Granderson joined the conversation, highlighting continuing economic disparities and the relative silence of professional athletes. At the New Yorker, Vauhini Vara pointed out unsettling trends that show continued wealth gaps due to investments, and the silence of government policy. 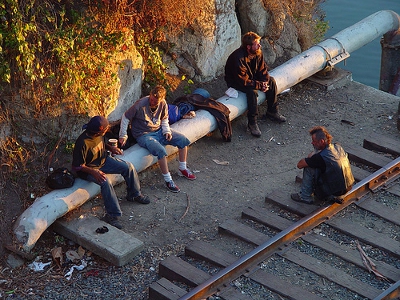 They were right to notice a difference. Just slightly more than 50 years ago, the United States public and leadership began to place enormous focus on domestic poverty. Lyndon B. Johnson took the presidency, Dr. Martin Luther King Jr. called for jobs and justice and Michael Harrington, through The Other America, and other prominent scholars provided an intellectual basis for fighting poverty.  The focus of media reflected the public outcry, both in tone and in volume. By the late 1960s, the New York Times ran an average of about three articles per day focused on poverty in the United States, and the vast majority focused on the breakdown in social order, or structural barriers to economic success.

And the public policy followed. Congress passed Medicare, Medicaid and Food Stamps. In the Republican Administrations of the late 1960s and early 1970s, government aid continued to grow with the passage of the Earned Income Tax Credit and other spending increases.

Figure 1 – Index of Government Generosity toward the Poor. 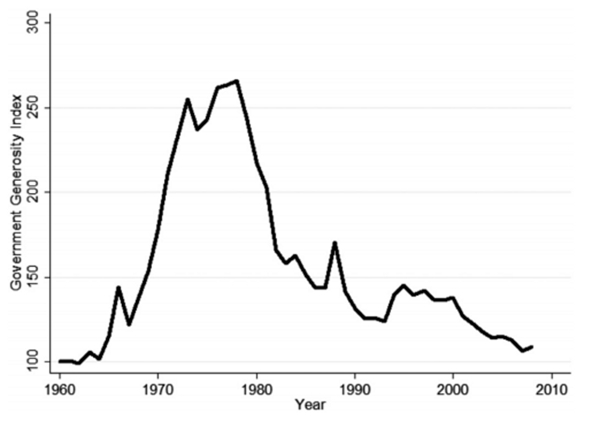 Beginning in the late 1960s, the public conversation began to change. The intense media focus associated with the War on Poverty faded away. Even as the media placed less focus on poverty in the United States, the poor increasingly were depicted as refusing to “take personal responsibility and care for their lives,” as Governor Mitt Romney said in a private fundraiser during the 2012 Presidential campaign. The focus on dependency grew as the focus on social inequality or the barriers to economic opportunity shrunk.

Talking about the poor as lazy or as in danger of becoming dependent on government dates to before the founding of the United States. Benjamin Franklin, in 1753, wrote about his worries that giving support to the poor would “provide encouragements for Laziness, and supports for Folly.” In 1904, Robert Hunter released Poverty, which found 10 million people in poverty, with the majority poor because of social wrongs but with others poor “because of their own folly and vice.” However, in the last 40 years, those sentiments have moved from a small portion of public conversation to the dominant narrative, influencing both policy and public attitudes.

In the late 1960s, the conversation began to shift, and by 1976 Presidential Candidate Ronald Reagan told crowds about a Chicago woman using 80 names and 30 addresses to collect welfare benefits.  Government programs to help the poor, once described as important social safety nets, became recipes for dependency, waste, fraud, and abuse.

During that same time, government spending towards low-income people has increased. However, removing medical care from the equation, and taking into account GDP growth, we are no more and no less generous to the poor now than we were in 1960, before the War on Poverty.  We are significantly less generous than we were at the peak of those programs.

In his editorial in the New York Times, William Jones writes that, “The solution may not be another march on Washington. But real changes in policy, and the defense of previous victories, require the combination of institutional backing, coalition building and ambitious demands that brought so many people to the National Mall in 1963.”

While our research provides no recipe for those of us who would like to see increased government generosity, it does suggest that a first step should be a public dialogue that is more respectful to those struggling in a tough economy.

This article is a version of the paper, Framing the Poor” which appeared in the February 2013 issue of the Policy Studies Journal.

Max Rose – Durham
Max Rose is a Program Associate at MDC, a Durham, North Carolina-based non-profit that helps organizations and communities of the United States South close the gaps that separate people from opportunity.