The financial crisis has seen an explosion in government debt levels, and there is now increasing concern about both its sustainability and ownership by foreign investors. Sandy Hager takes a close look at an often overlooked aspect in current debates – the pattern of federal debt ownership by domestic stakeholders within the U.S. He argues that past decades have seen an unprecedented concentration of federal debt in the hands of the richest one percent of households and the largest corporations. These elite interests, he writes, have little interest in reducing debt levels, and their frequent calls for debt reduction are in fact a mask for their agenda of cutting social programs.

During the current financial crisis, government debt levels across the advanced capitalist world have soared. In the United States, the portion of the federal debt ‘held by the public’ has more than doubled from 36 percent of GDP in 2007 to 73 percent in 2012. This explosive increase in the federal debt raises an important question that strikes at the heart of the future of the US political economy: who is buying up this rising mountain of US Treasury securities?

For the most part, policy makers and pundits alike have fixated on the rising share of the federal debt owned by the ‘rest of the world’. Foreign central banks and private investors now own around half of the federal debt, provoking fears about the influence that foreign creditors, especially China, might have on US policy as a result of their treasury holdings.

But there is another aspect that has been completely overlooked in the current debates. And that is the pattern of ownership by domestic private stakeholders within the US: the American households and businesses who together still own roughly one-third or $3.8 trillion of the outstanding federal debt.

This neglect of domestic ownership is especially curious given the long history of controversy surrounding the issue. Dating back to the era of independence, a debate has raged in the US, with some arguing that the federal debt is widely owned and others suggesting that it is heavily concentrated. Yet without access to reliable data, these earlier claims were never subjected to any precise empirical investigation.

In an effort to re-invigorate this long-standing tradition, my research marks the first effort to systematically map the pattern of domestic ownership of the US federal debt. The data is often patchy, but the estimates still reveal a staggering trend towards ownership concentration over the past three decades.

In the post-World War II period, the top 1 percent of US households owned around 20 percent of the household sector share of the federal debt, while the largest 2,500 US corporations owned around 65 percent of the corporate sector share of the federal debt, as shown in Figure 1 and Table 1 below. Since the early 1980s, however, these shares have increased to over 40 percent and 80 percent, respectively. Based on this research, I argue that over the past three decades, and especially in the context of the current crisis, the federal debt has come to serve as an institution of power working in the interests of those at the very top of the social hierarchy. 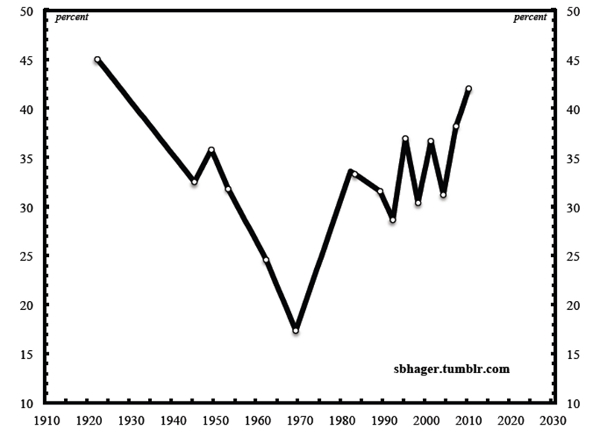 One common rebuttal to these arguments suggests that a significant number of Americans have an indirect stake in the federal debt thanks to their ownership of pension funds, mutual funds, and other financial intermediaries, which invest heavily in treasury securities. Indirect ownership of the federal debt, according to this view, helps to offset concentration in direct ownership.

This claim, though, is highly misleading. And the reason is that ownership of financial wealth (including corporate stocks and bonds, mutual and pension funds, etc.) has itself become heavily concentrated over the past three decades. Edward Wolff’s pioneering work indicates that the top percentile’s share of financial wealth was roughly equal to the share owned by the bottom 95 percent of households in the 1960s. Yet by 2010, the bottom 95 percent’s share of financial wealth represented only two-thirds of the share owned by the top percentile!

In the end, it’s difficult to deny that ownership of the federal debt has become increasingly concentrated over the past three decades. But even if we accept the empirical findings, the conclusions drawn here might seem counter-intuitive, if not completely contradictory. After all, aren’t ruling elites adverse to big government and to large federal debts?

To be sure, further increases to the federal debt might impact the perceived creditworthiness of the federal government and draw the ire of wealthy elites who constitute the largest fraction of federal bondholders. Yet at the same time, substantial reductions to the federal debt are bound to upset those same bondholders, who have come to rely on the Treasuries market as a ‘safe haven’ in a time of systemic crisis.

What then are we to make of groups like ‘Fix the Debt’, led by billionaire Pete Peterson and set up for the express purpose of lobbying for federal debt reduction? How can the federal debt serve as an institution of power if these powerful interests seem so opposed to it?

Even a cursory glance at the fiscal strategy of the ‘Fix the Debt’ campaign shows that it is much more concerned with cutting social programs than with reducing the federal debt. And as Paul Krugman points out, it is difficult to regard all the fear mongering about federal debt and deficits as little more than a ploy for groups like Fix the Debt to broaden support for what they really want: drastic cuts in social spending.

Austerity, rather than debt reduction, turns out to be an ideal fiscal strategy for powerful interests. Not only do social spending cuts help to preserve the value and sanctity of existing Treasuries, they also relieve some of the pressures for tax hikes, which would fall more heavily on the incomes of the rich and powerful.

Growing wealth and income inequality has come to shape almost every aspect of social life. It should therefore come as no surprise that inequality also permeates the issue of public finance. But thus far the debates over America’s fiscal politics have completely ignored the rapid concentration in domestic ownership of the federal debt. Perhaps efforts to resist the current austerity agenda should start with the following question: how are the federal government’s increasingly powerful creditors going to react to a more progressive fiscal alternative?

Sandy Brian Hager – LSE Department of International Relations
Sandy Hager is a Fellow in International Political Economy at the LSE. His research interests include the political economy of public debt, corporate taxation and banking. He blogs at http://sbhager.tumblr.com/.