Last night President Obama gave his annual State of the Union address to a joint session of Congress, against the backdrop of a troubled rollout for his signature healthcare reform, and Congressional gridlock over issues such as the minimum wage and immigration reform. James D. Boys writes that the speech may have been Obama’s best chance at reinvigorating a beleaguered administration, but that it largely failed to do so. He writes that Obama’s State of the Union had little new to offer, save for small postures and restated positions, and that his stated willingness to act by Executive Authority will do nothing to assist bi-partisanship.

If, like me, you have fond memories of the Clinton years, you will recall that the President routinely opened his annual address to Congress by intoning that ‘the State of our Union is Strong.’ Not a bad way to begin, both structurally and rhetorically. It set the tone and demonstrated mastery of the moment.  (Even when the wrong speech was fed into his Teleprompter). In other words, Clinton did everything that was missing from the 2014 State of the Union address.

President Obama’s speech was fascinating for many reasons. It was, perhaps, his best (some would say final) opportunity to breathe new life into an administration that appears to be rapidly running out of road and to put the disaster that was 2013 behind him. With the world watching and the nation gathered around television screens, computer terminals and perhaps even the odd tablet, the stage was set for Obama’s big moment. So much so that talk emerged of State of the Union fatigue! This, however, was Obama’s big night for his big reveal; what would he do with the remainder of his presidency? What initiatives would be unveiled that would doubtless prove instrumental in any legacy?

The answer, apparently, was not very much. When even Gary Younge is forced to concede that Obama’s union is in a state, it’s time to start packing…

Obama promised a year of action for 2014 but this appeared to be lacking in his speech. Instead of sweeping ideas and potential legislative initiates, the speech was full of small postures and restated positions. It is remarkable that a year into his second term the president had so little new to offer and raises the question as to why he ran for re-election if he has no tangible agenda to initiate over the next three years. He has served but a quarter of his second term, and yet specific policy initiatives were thin on the ground.

Instead of moving forward, Obama backtracked, and called out his opponents over their opposition to his healthcare plans. The White House is desperate to get on the front foot on this issue and move beyond the technical issues that have haunted the administration since its roll out. Such efforts will probably succeed as the technical glitches get sorted, but the initiative has taken a pounding as a result.

50 years on from Lyndon Johnson’s ambitious War on Poverty, the president who initially appeared to offer so much to elements of American society that had previously gone un-noticed, did little to breathe life into the corpse that is the Great Society. Much has been made of Obama’s pledge to raise the minimum wage for federal contractors from $7.25 to $10.10, but this will have a limited impact since many federal workers already earn more than this. Neither will it be applied retrospectively and so will only have a limited impact at some point in the future. Republicans, naturally, have concerns that it could drive businesses to the wall.

That being the case the president made a play for the female vote (traditionally Democrat) by highlighting the gender gap in pay and conditions and calling this an embarrassment. It should be highlighted, of course, that he has been president since January 2009, and so part of that embarrassment must be shouldered by his administration. This, remarkably enough, was not conceded. 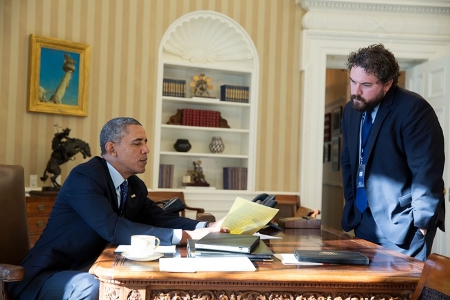 President Barack Obama works on his State of the Union address with Director of Speechwriting Cody Keenan in the Oval Office, Jan. 22, 2014. (Official White House Photo by Pete Souza)

Continuing in the election year mode, issues of immigration reform have become lost in the weeds and the president’s blustering efforts to address this issue are unlikely to help. A bi-partisan group was making interesting headway on this issue last year, until Obama stumbled in and insisted on stamping his own views on the process, which appears to have damned the initiative to failure.

There was little sign last night of a contrite chief executive, seeking the bi-partisan approach to policy that is necessary for success on Capitol Hill. Instead, Obama’s perceived presidential pomposity was exacerbated by his announcement of a willingness to act by Executive Authority in defiance of Congress, a stance that will do nothing to assist bi-partisanship for the remained of this time in office. It’s almost as though he wishes to fail in his legislative relations! For a former Constitutional lecturer, he appears to have a rather nuanced interpretation of the role of the president as defined by the Founders, who actively sought to avoid a leader capable of ruling by decree.

Three years from now the next President of the United States will be in office and Obama will presumably be home in Illinois. When he kicks back and watches the new president’s first address to Congress, he will be forced to concede (privately, of course) that his 2014 attempt to rescue his presidency failed to do so. With his opinion polls lower than many members of Congress, he remains a liability for Democrats heading into the midterms, an event that will effectively end the Obama presidency and fire the starting pistol for the 2016 presidential election to find his successor.  They, presumably, will have rather more initiatives to promote than the incumbent and greater personal and political skills with which to try and implement them. One can but hope.