As the 2016 elections draw closer, discussions of how Hillary Clinton’s gender will affect her presidential prospects have grown more frequent and frenzied. Using a two-wave panel survey, Kathleen Dolan examines how gender stereotypes actually affect voters’ decisions at the polls. She finds no evidence that beliefs about women in the abstract lead voters to evaluate individual candidates differently than their male opponents. Instead, the decision to vote for a female candidate depends on whether the voter shares her political party.

In September of 2013, Christine Quinn, Speaker of the New York City Council, lost her bid for the Democratic nomination for Mayor of New York. The day after the primary, a New York Times article entitled “In Quinn’s Loss, Questions about the Role of Gender and Sexuality,” tried to determine how Ms. Quinn had gone from early front-runner to a third place finish. Despite saying that no one “blamed her loss wholly, or even mostly, on her gender,” the reporters cataloged the ways in which being a woman might have hurt her, giving attention to the comments of voters who felt that Quinn’s hair, clothing, and voice did not match their expectations of a woman candidate. Despite any number of explanations for her loss, the irresistible urge among many observers was to assume that the outcome was tied, at least to some degree, to how she was viewed as a woman.

In each election cycle, we can easily conjure up anecdotal examples of high-level women candidates who have been subjected to criticism and attacks because of their age (too young or too old), appearance (too beautiful or too plain), or family status (whether mothers or childless). Ask Sarah Palin, Hillary Clinton, or Michele Bachmann what it is like for women at times on the campaign trail. For support, consult the extensive literature in political science that demonstrates that people hold clear gender stereotypes about the policy competence and personality traits of women and men. Women are thought to be better able to handle “female” policies like education and health care, while men are assumed to be better at the “male” issues, like the economic and national security. Women are seen as more compassionate and honest, men as stronger and more decisive leaders. Research often warns that gender stereotypes can work against women candidates if voters perceive them not to possess the “right” skills and abilities for office.

These assumptions have taken hold because they are sometimes supported by anecdotal evidence from campaigns and because political scientists have long lacked appropriate data to examine whether the abstract stereotyped attitudes people possess actually shape their behaviors when they are faced with women candidates. In an attempt to gather data that would allow me to examine how people evaluate women candidates in real elections, I conducted a two-wave panel survey of 3150 U.S. adults in 29 states in 2010. The sample included respondents who had experienced either same-sex (man v. man) or mixed sex (woman v. man) races for the U.S. House of Representatives. One of the main goals of the survey was to determine whether voters employed their gender stereotypes when evaluating and choosing candidates. To allow for this, I used the two waves of the survey to separately measure respondent gender stereotypes about the policy competence (education, health care, economy, military, etc.) and personality traits (leadership, compassion, intelligence, etc.) of “women and men who run for office” as well as their evaluations of the policy competencies and traits of the specific candidates in their elections. These data allow me to link the gender stereotypes people may (or may not) hold with their specific actions—candidate evaluations and vote choice—toward the specific candidates in their elections.

In examining the candidate evaluations and vote choice decisions people make in races where women run against men for the U.S. House, I find very little evidence that abstract gender stereotypes hurt or help these women. There is no evidence that voter beliefs about the abilities and traits of women in the abstract lead voters to evaluate individual women candidates differently than their male opponents. In examining how people evaluate candidates, I find that none of the female and male policy or trait stereotypes people hold about women and men are related to their evaluations of Republican women candidates. Things are a bit different for Democratic women candidates, however, with voters who hold negative stereotypes about the ability of women to handle traditionally “male” issues being more likely to favor their male opponents on male policy issues. Beyond this, the most important influence on voter evaluations of all women candidates is political party, specifically, whether a voter shares the party of the woman candidate. In all circumstances, voters who share the party of a woman candidate are overwhelmingly likely to evaluate her as superior to her male opponent. This finding is perfectly in line with long-standing scholarship on the primacy of political party as an influence on electoral behavior.

The same patterns are evident when I examine the vote choice decisions people make. Despite past research that warns that gender stereotypes will cost women candidates votes, there is no evidence that this is the case. In my analysis, none of the female and male policy or trait stereotypes are significantly related to voting for or against women candidates. Instead, for both Democratic and Republican women candidates, voters rely on traditional political signals like party, incumbency, and campaign spending in making their vote choice decisions. Voters are overwhelmingly likely to support the candidate of their party, regardless of the sex of the candidate. This difference in the impact of gender stereotypes and political party correspondence on voting for women is evident from the example in Figure 1.

This figure compares the impact of one stereotype—ideas about men’s superiority on male policy issues—with the impact of political party on a voter’s willingness to vote for a Democratic woman running for the House. Here it is clear that sharing the political party of a woman candidate is vastly more important to a voter’s decision to support her than are gender stereotypes that voter might hold. For example, Republican voters, regardless of their gender stereotyped ideas about who can best handle male policies, are much less likely to vote for a Democratic woman than are Democratic voters. Republicans who hold stereotypes about men’s superiority on male issues have the same low likelihood (about 25 percent) of voting for a Democratic woman as do Republicans who see woman as capable of handling issues like crime and the economy. Democrats, on the other hand, are overwhelmingly likely to vote for the Democratic woman—more than 80 percent of the time—regardless of whether they see women or men as better at handling male policies. Given what we know about the centrality of party to shaping political decisions, this makes sense and demonstrates that the presence of women candidates does not disturb expected political relationships.

As we gear up to see whether Hillary Clinton, or some other woman candidate, seeks the U.S. presidency in 2016, we can be assured that, despite the occasional high-visibility example of sexism toward women candidates, there is little evidence that women are harmed by their sex.

Kathleen Dolan- University of Wisconsin, Milwaukee
Kathleen Dolan is a Professor in the Department of Political Science at the University of Wisconsin, Milwaukee. Her research focuses on public opinion, elections, and voting behavior. Dolan is the author of Voting for Women: How the Public Evaluates Women Candidates and the forthcoming book When Does Gender Matter? Women Candidates and Gender Stereotypes in American Elections (Oxford University Press). Her work has also appeared in numerous peer-reviewed journals. She has served as co-editor of the journal Politics & Gender and as a member of the board of the American National Election Studies.

Posted In: Elections and party politics across the US | Kathleen Dolan 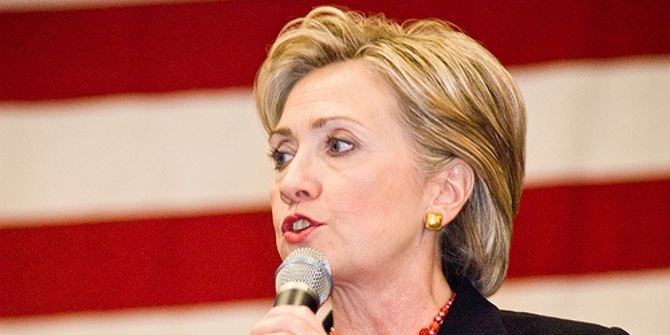