State policymakers tend to look for lessons from their neighbors and other innovative states.

State policymakers tend to look for lessons from their neighbors and other innovative states.

U.S states are often described as ‘laboratories of democracy’, as they have a significant amount of freedom to try out and experiment with public policies. David Glick takes a close look at how states learn from one another. Focusing on policy briefs prepared for state policymakers, he finds that these reports tend to focus on information from nearby states and those that are known to be innovative. He also finds that other states’ policies tend to be used as inputs into the policymaking process rather than being simply adopted wholesale.

Former Supreme Court Justice Louis Brandeis famously characterized the 50 United States as potential laboratories of democracy that can “try novel social and economic experiments without risk to the rest of the country” (New State Ice Co. v. Lieberman, 1932). While the federal government’s powers have grown relative to the states’ over time, the U.S. federal system still allows for significant variation and experimentation. For example, motorists crossing the border from New Hampshire into Massachusetts in the summer encounter flashing signs reminding them that fire works, which are widely available for private purchase and use in the former, are very much banned in the latter. Perhaps most famously in recent years, Massachusetts’ unique health care reform experiment ultimately became a controversial model for the Affordable Care Act (“Obamacare”), and the functionality of each state’s new health care exchange varied wildly after launch.

Research into “policy diffusion,” at least as applied to the U.S., focuses on the spread of policy experiments from state to state. This literature comprises many sophisticated studies and a number of important findings about the patterns and mechanisms through which policies spread. Most of what we know comes from studies that pick one policy and track it across the 50 states. My recent research with Zoe Friedland (who was an undergraduate at the time) supplements this literature by focusing on two states across 60 or so policy issues. Instead of using policy adoptions as the dependent variable, we focus on the information gathered when considering policy change as the primary dependent variable.  This allows us to address new questions that build on previous research such as; do policy makers systematically seek out information about others’ policies, or does diffusion happens in other ways?  If they seek out information, how often do they do it, and where do they look for ideas? Do they study their neighbors? Perceived successes? Or high capacity states?

To answer these questions we coded research briefs prepared for policy makers in New Hampshire and Vermont to track the instances in which researchers described other states’ policies. This unique data opportunity follows from the fact that students working in the Policy Research Shop (PRS), a program of Dartmouth College’s Rockefeller Center for Public Policy, fill the research gap in two states with citizen legislatures and very limited staff by producing policy research briefs responsive to policy maker’s needs and requests. The fact that these are student, rather than professional, briefs raises a number of data validity questions. We argue that these concerns are important and that readers should generalize cautiously, but that the Dartmouth program effectively resembles more professional work done elsewhere. The students, advised by faculty, are tasked with responding to actual requests from policy makers rather than specific assignment expectations. Through an interview with a professional policy researcher in New Hampshire and an analysis of 10 policy briefs from Washington State’s more professional policy research organization we have been able to show that the Dartmouth work reasonably approximates policy research done elsewhere.

Following other research we focus on researching neighbors and learning from successes. First, our analysis provides evidence that researchers disproportionately seek out information about their neighbors’ policies. Maine, Vermont, and Massachusetts were among the most cited states, and New England states averaged 12.6 mentions and 6.4 detailed studies compared to 5.4 and 3.1 for all others (all highly significant). At the same time, our data show that geographic proximity is far from dominant. California, Washington, Georgia, and Minnesota had policies described in case studies nearly as often as Vermont and Maine, and more often than Massachusetts. Moreover, all but about 10 states had at least one of their policies studied in detail. The third map speaks to learning from perceived successes. California was cited the most, and Washington, Oregon, and Georgia were all cited at rates comparable to the neighbors. It is clear from the map that the policy researchers, at times prompted by legislators that may have heard about particular states’ policies, genuinely search for, and report on, good practices from across the country. Combined, the maps provide some evidence supportive of both a neighbors and a successes hypothesis. As importantly, they evince fairly sophisticated information gathering since the research does not myopically focus on neighbors or big states. 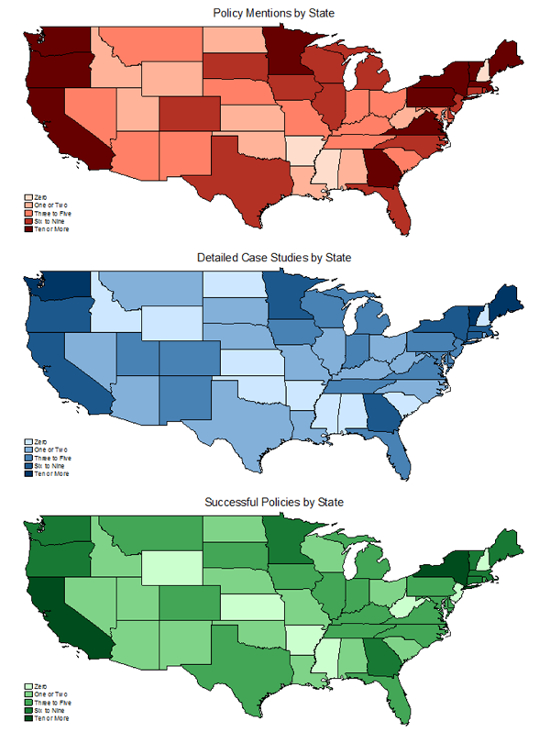 We also investigated the link between the historical state innovativeness scores (roughly a measure of which states adopt innovations early and late) estimated by Boehmke and Skinner (2012), and our data from the research reports. We plot the counts of detailed case studies by innovativeness scores in Figure 2. This simple analysis shows that there is a strong relationship between a state’s innovativeness and the number of times it shows up in the research reports, and that nearly all of the “over-cited” states are neighbors.  Vermont, Maine, Massachusetts, and New York all stand out well above the line. Regression analysis corroborates the pictures and shows that both relationships are highly significant. The researchers tend to study more innovative and high capacity states while also disproportionately studying nearby states. These results are consistent with our broader claim that the information gathering that underlies policy diffusion is systematic and strategic. 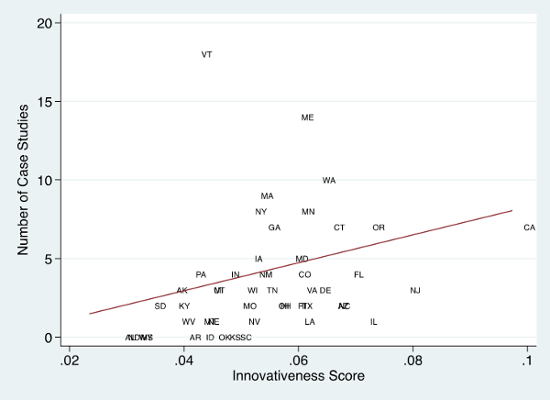 Note: Line is a function of Boehmke and Skinner’s 1959-2009 Innovativeness Scores. The line is a linear fit between innovativeness and the count of each states’ policies in the reports.

Moving from “who” to “when” questions, as well as evidence of implementation of policies, we find little evidence that factors like issue salience and complexity affect learning from others. We also find few cases in which New Hampshire or Vermont implemented the policies discussed in the briefs. While we find a few instances, we think the evidence points to others’ policies being important inputs in policy choice but normally as ideas to learn from rather than models to simply adopt. Our evidence also suggests that much of the learning and influence happens in low salience issues that scholars normally don’t pay much attention to.

This article is based on the paper How Often Do States Study Each Other? Evidence of Policy Knowledge Diffusion in American Politics Research.