Politicians and pundits alike regularly bemoan the lack of electoral competition in congressional races as incumbent reelection rates frequently soar to over 90 percent. Redistricting and gerrymandering are often blamed as a way to lock members into their seats for at least a decade.  Jamie L. Carson, Michael H. Crespin and Ryan D. Williamson ask if there are ways to inject more competition into elections during the mandated redistricting cycles.  Based on an analysis of redistricting cycles from 1972 to 2012, they show that commission and court-drawn districts experience marginally more competition than those drawn by state legislatures.  These results provide additional support for the argument that one way to increase the competitiveness of congressional elections is to allow extra-legislative bodies to draw congressional district boundaries.

Beginning in the 1970s, scholars noticed that members of Congress were winning reelection at higher and higher rates. While some blame redistricting as a contributing factor to the increase in the incumbency advantage, others disagree over how much it mattered and argue partisan sorting is really to blame. Proponents of redistricting reform argue taking the power to draw district boundaries away from powerful elected officials will increase competition and improve democracy. Starting with the first prototype commission in 1972, we test if the elections in congressional districts drawn outside of the legislative process are any more competitive compared to the regular method. Using data from the last five redistricting cycles, we show commission and court drawn plans exhibit moderately increased levels of competition.

Unable to come up with a redistricting plan for the 1966 congressional elections, the Maryland General Assembly left it to the courts to draw new district boundaries. After the frustration with the previous course of action, the state government decided to experiment with a relatively new method and appointed a joint committee consisting of delegates, state senators, and administrative representatives, to devise new congressional districts following the 1970 census. Although the legislature maintained the authority to approve the final maps, the goal was for the committee to do the vast majority of the work. This represented an attempt to take the initial planning outside of the normal legislative process and formed the basis for a prototype redistricting commission.

In the following decades, additional states such as Connecticut, Hawaii, Maine, and Montana also tried to move redistricting, partially or in whole, toward an extra-legislative process. Currently, 8 states use some sort of commission, broadly defined, to help draw congressional districts. In other states, courts step in to produce plans when legislatures are unable to come up with maps on time or that pass legal standing. Since these methods are an attempt to take politics and legislatures out of the process, we expect elections drawn by courts or commissions to be more competitive. 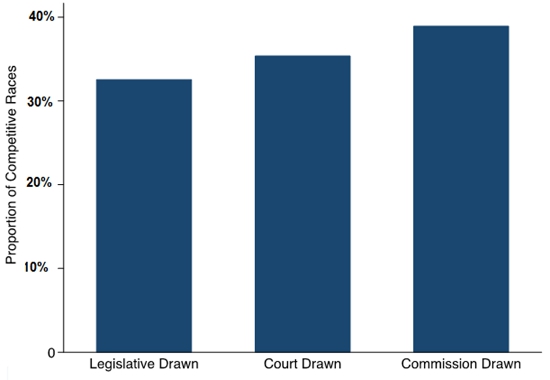 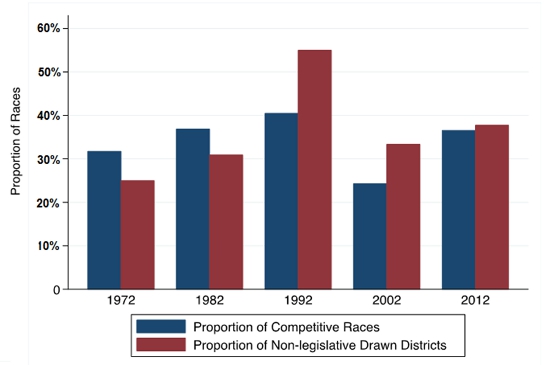 With these encouraging results, we then turn to a more sophisticated analysis.  To do so, our statistical model estimates whether or not a race is competitive at the 60 percent threshold. Our main explanatory variable is the method employed to redraw the congressional boundaries.  We also statistically control for the presence of a quality challenger, open seat races, elections in southern states, the amount of money spent by both campaigns, a measure of the district’s partisanship (as measured by presidential vote shares in each congressional district), and the year these elections are held. Our results in Figure 3 show that, all else equal, when an extra-legislative body is responsible for reshaping districts, the subsequent elections have a 4 percent greater chance of being competitive. 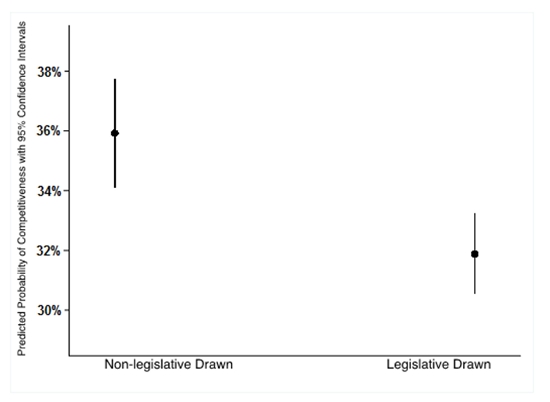 These first results, however, combine all the redistricting cycles, including years earlier years when elections were generally more competitive.  In Figure 4 we separate our analyses into two groups, 1972-82 and 1992-2012, and show the effects are more pronounced, largely due to the widespread use of computing technology.  In the earlier time frame, there is no difference between types of plans.  In later years, though most races are not competitive, non-legislative plans are nearly twice as likely to be competitive compared to their legislative based counterparts.

Figure 4 – Effect of Technology on Competitiveness 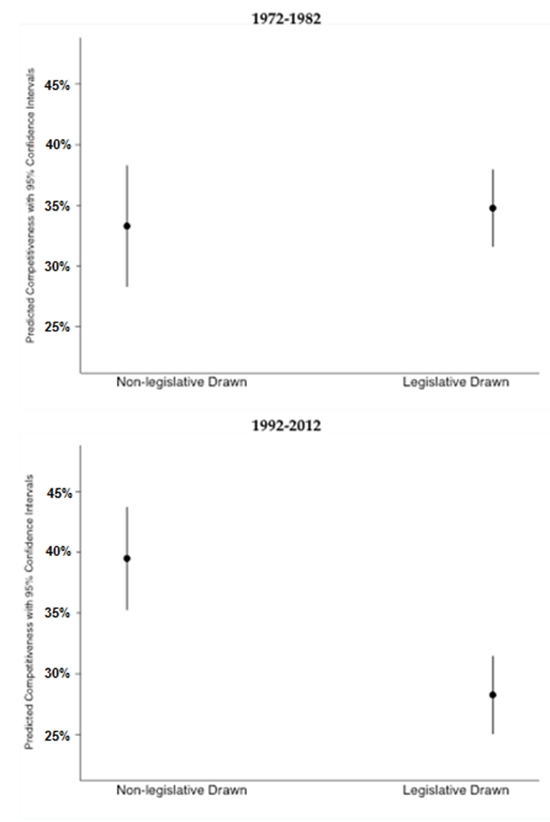 In summary, if states wish to increase competition in their congressional districts, utilizing non-legislative methods when redistricting is an option that should be considered. Knowing that state legislators are able to control the level of competition in a district, should the power to redraw congressional lines be removed from their hands? If so, would it make sense to utilize independent or non-partisan commissions to reduce the amount of influence exerted by partisan state legislators? If states are able to alter the balance of power in the House through their redistricting plans, then how they draw the seats can have far reaching policy consequences well into the future.