Being backed by extended party networks can mean a greater chance of electoral success for a Congressional challenger.

Being backed by extended party networks can mean a greater chance of electoral success for a Congressional challenger.

Political parties play a central role in democracies, helping to mediate between citizens and governing elites by running candidates for office who promise to pursue policy programs.  But what if “the party” is really more of a collection of interest groups than a traditional party organization?  Using data from US congressional elections and campaign finance, Bruce Desmarais, Ray La Raja and Mike Kowal show that parties are networks of partisan groups that converge on select groups of challengers.  They explain that parties in the U.S. have become so distinctive and polarized, because they represent unique coalitions of policy demanders that influence the ideological composition of Congress.

In recent years, there has been a re-conceptualization of political parties in the United States.   Rather than think of them as single organizations, scholars have begun to conceive of them as dynamic, dispersed systems of interconnected interest groups.  In other words, the “party” is constituted by an extended partisan network (EPN) comprised of groups that do not necessarily carry the label Democrat or Republican.   The prevailing theory is that the EPN collectively pursues the functions of traditional party organizations such as selecting and supporting favored candidates for office.

We are among the first to test empirically whether EPNs exist and if they actually make a difference in elections.  Using network analysis with campaign finance data, we find distinctive communities of groups that converge their political spending on particular challengers.  Moreover, challengers who find themselves in this selective partisan group do substantially better in elections than other challengers even controlling for the overall amount of campaign money they spend.  These findings reveal that conventional accounts of political parties are too simplistic.  Instead, we find that multiple interest groups – along with the traditional party organizations — perform in coordination the tasks we typically associate with political parties.

There are at least two important implications of these findings.  First, by showing that political parties are more than traditional party organizations, we raise a host of questions related to campaign finance reform and other efforts to regulate parties.  If the party is not simply the Democratic or Republican Party committee, then efforts to limit party financing as a way of thwarting corruption are greatly complicated.

Second, our empirical finding provides a plausible explanation for why American parties in Congress do not converge on the preference of median voters (as predicted by Anthony Downs’s economic theory of democracy) but instead stay well to the ideological left or right of the vast majority of Americans.  Indeed, our findings provide some clues as to why U.S. parties are increasingly polarized ideologically.

We looked at data on election outcomes and political action committee (PACs) and formal party committee contributions to all candidates for the U.S. House of Representatives from 1994-2010.  Figure 1 is an example of the networks we construct from these data, linking committee contributions with candidates in the 2010 elections. The left graph shows all candidates and the right one shows only winners. The colored dots display candidates based on party and incumbency status: Democratic incumbents (royal blue), Democratic nonincumbents (light blue), Republican incumbents (red), and Republican nonincumbents (orange).  In this figure only candidates are visible (not PACs).  Lines are drawn from the invisible PACs to candidates. As such, candidates with similar contribution patterns are placed closer together. 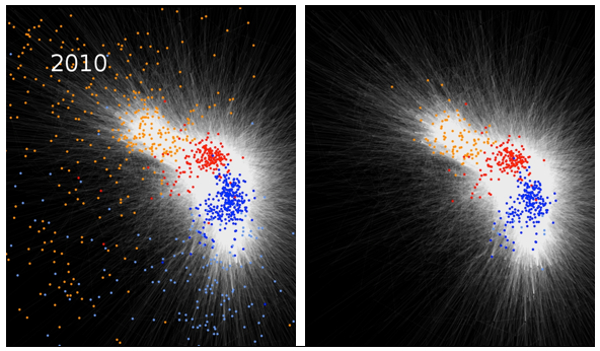 This graphic demonstrates that the Republican challengers that ended up winning looked very much like Republican incumbents in terms of contribution patterns.  That is, the winning challengers in the right graph received money from similar “communities” of interest groups (in contrast to orange and light blue challengers in the left graph who appear scattered outside the core).  The same is true from Democrats.   This pattern suggests strongly that ideologically coherent sets of donors behave very much like traditional parties by backing a selective group of challengers and helping them win.

Figure 2 shows just how much being integrated in the party network helps. This graphic uses a logit analysis from our supporting data to generate predictions of challenger success based on whether they are integrated into the EPN, controlling for all the usual factors that affect electoral outcomes such as political spending.  In this instance, we assume a typical situation in which incumbent spending is double the challenger spending level.   The dark line, which represents challengers with party community backing, shows that these candidates outperform those who do not get party community backing (light line).  So, for example, a party-back challenger who spends $1.5 million has more than a 30 percent chance of defeating an incumbent compared to a non-party backed challenger whose chances are less than 15 percent (keep in mind that unseating an incumbent is extremely difficult). 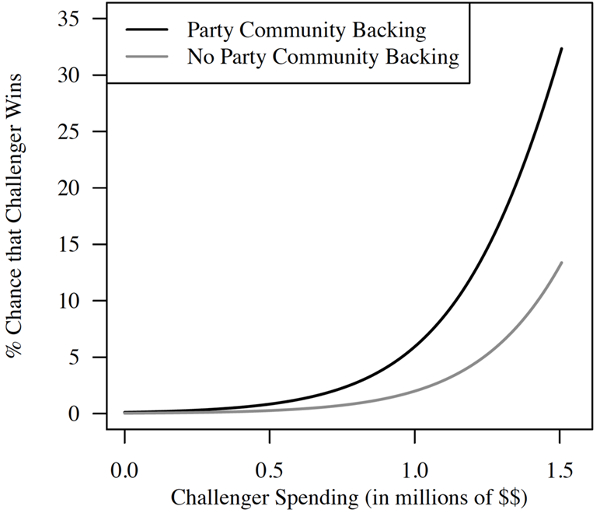 Our results suggest a key interpretation of a role played by political parties.  Parties arise because there are several political interests in pursuit of narrow policy objectives (e.g., protecting the environment, defending gun rights). These interests will rarely achieve success if they go it alone. The party forms as a compromise among non-conflicting political interests in which each group achieves more than would be possible in solitary pursuit, in exchange for supporting the goals of other party members.  Despite pursuing somewhat disconnected policies, interests choose to create a long coalition that strives to stay together across time to increase the likelihood that each will achieve their particular goals. Collectively, these groups identify candidates for office who (1) have strong electoral prospects, and (2) will deliver on the shared party agenda.

Why do EPN-backed challengers perform better, above and beyond actual spending? It may be due to the hurdles faced by challengers in convincingly communicating their policy agendas. We argue that when a party coalition converges on a challenger the coalition’s support sends a strong signal to attentive voters that the challenger supports the party agenda and stands a good chance of winning.  These voters may have ties with such groups and comprise a significant portion of the electorate, particularly in primaries and low turnout general elections.  Another benefit of EPN support is that candidates derive electoral resources – beyond campaign contributions and group endorsements — in coordination with other groups in the coalition that boost candidate prospects.

What can these findings tell us about the current state of politics in the US?  We suggest that the high stakes for control of Congress in the past several decades has strengthened the role of highly partisan and ideological groups in shaping the overall direction of political parties.  These groups have the means and motive to coordinate their support for candidates who espouse their views.  Their clout is likely abetted by campaign finance laws that privilege certain kinds of political organizations.  The end result is that a narrow group of policy demanders constitute a party that does not necessarily reflect the preferences of rank-and-file party voters, much less the broader electorate.  We suspect this is one reason why we see members Congress facing policy gridlock even as the public expresses a desire for greater policy compromise.

This article is based on the paper The Fates of Challengers in U.S. House Elections: The Role of Extended Party Networks in Supporting Candidates and Shaping Electoral Outcomes in the American Journal of Political Science.

Bruce Desmarais – University of Massachusetts Amherst
Bruce Desmarais is an assistant professor in the Deptartment of Political Science, core faculty member in the Computational Social Science Institute, and Associate Director of the Institute for Social Science Research at the University of Massachusetts Amherst. In his research, he applies network theory and network analytic methodology to the study of complex political systems.