The increasing partisanship and polarization present Congress has been subject to a great deal of study and many explanations as to its causes have been put forward. Justin H. Kirkland takes a different line in investigating polarization, by looking at how it varies between state legislatures. Using survey and roll call vote data from across the country, he argues that in those states with more ideologically disparate populations, legislative districts will become more extreme as people sort into them. This in turn will lead to their legislators expressing a higher degree of partisanship in the state legislature.

“Too often bipartisanship is equated with centrism or deal cutting. Bipartisanship is not the opposite of principle. One can be very conservative or very liberal and still have a bipartisan mindset. Such a mindset acknowledges that the other party is also patriotic and may have some good ideas.” – Richard Lugar, 2012

Following his defeat at the hands of Richard Mourdock in the Republican primary for Indiana’s Senate seat, former Senator Richard Lugar (R-IN) issued a scathing appraisal of the U.S. Congress’s ability to function in the face of hyper-partisanship. He also provided the above reminder that the ability to cooperate in face of disagreement had long been the hallmark of the U.S. Senate. However, like citizens and U.S. House members, the Senate was increasingly a chamber characterized by exceedingly strong partisanship.

That Congress has become more partisan is fairly well-established. Where this increased partisanship originates is a question with which scholars are still wrestling. Rather than pushing on the questions of legislative polarization and partisanship from the perspective of the changes in Congress, I take a slightly different cut at the question. While Congress is hyper-partisan, the degree of polarization, partisanship, and party loyalty in U.S. state legislatures varies dramatically. In my research, I use this variance to assess the roots of legislative polarization and party cohesion.

My work suggests that an important factor in the makeup of legislative districts in a state is the heterogeneity or variance in the ideology of citizens in that state. The argument works like this. States with highly homogeneous populations where citizens’ preferences are all similar to one another get sliced up into legislative districts that are all themselves quite similar to each other. States made up of really heterogeneous populations where citizens hold highly varying views about issues of governance and politics don’t just get sliced up into heterogeneous districts, they get sliced up into extreme districts. Because citizens have a weak tendency to live around others like them, and because districts are imperfect samples of a state population, the odds of getting a set of ideologically extreme legislative districts go up quite quickly in states made up of heterogeneous populations, and as I pointed out earlier, extreme districts equal polarized, partisan legislators. In other words, the aggregate level of partisanship in a legislature is fundamentally related to the heterogeneity of citizens’ ideology. If legislators care about what their citizens want, then at least some of the blame for partisanship and polarization ought to lie at the feet of the citizens those legislators represent.

To see whether this sort of a story lines up well with reality, I construct measures of the ideological heterogeneity of citizens in a state using survey responses to the 2006 Cooperative Congressional Election Study. I then build measures of partisanship and polarization in state legislatures using both roll call voting and bill cosponsorship data from every state legislature in the country in 2007 (an analysis of over 100,000 bills). I then build two pretty simple statistical models; one predicting the ideological distance between legislative parties during roll call, and the other predicting probability that legislators work across party lines during cosponsorship. The results quite clearly indicate that states with very heterogeneous populations have more polarized roll call voting and more partisan cosponsorship environments.

A quick way to see these effects is to show the distribution of “ideal points” derived from the roll call voting of legislators in both parties in two states. Ideal point estimates are summaries of roll call voting behavior by legislators. Polarized parties have very little overlap in the ideal point estimates of legislators in the two parties, while moderate parties have a great deal of overlap implying that members of both parties vote across party lines often. Two states that are useful for comparison purposes are Illinois and Wisconsin. My survey evidence indicates that Wisconsin is much more heterogeneous than Illinois, so we should expect that the Wisconsin legislature is much more polarized than the Illinois legislature. 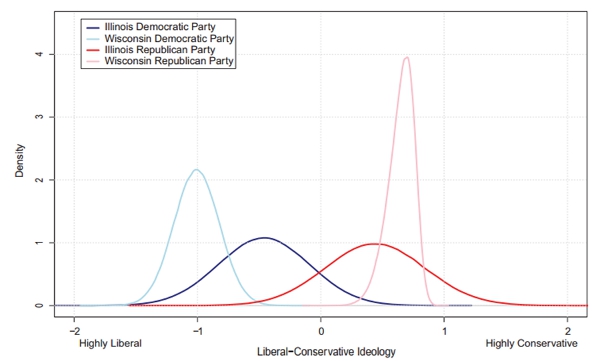 Figure 1 plots the polarization of voting from the lower legislative chambers of Illinois and Wisconsin. As you can see, the overlap between the Democratic and Republican ideal points in Illinois is quite large, indicating the Republicans and Democrats voted similarly with regularity in that chamber. Contrast that with the non-existent overlap in the voting behavior of the Republicans and Democrats in the lower chamber of Wisconsin’s legislature. Generally, these legislative chambers are pretty similar. They’re geographic neighbors, both full-time, both grant redistricting control to the legislature, and both use two-year terms. Nevertheless, the Wisconsin legislative parties are both much more polarized and much more cohesive than the Illinois legislative parties. My work suggests that this is at least partly due to the ideological divisions among citizens in those states.

There are a number of practical implications of my results. One of the important steps in my argument is that heterogeneous citizen populations get turned into extreme legislative districts, and that this facilitates extreme behavior by individual legislators. While political scientists continue to debate what role redistricting plays in polarization, the simple act of creating legislative districts at all plays some role in the levels of polarization we see. It is also worth noting that while the American public professes a preference for bipartisan behavior, when confronted with choices between partisan policy outcomes and bipartisan policy-making, most citizens prefer partisan outcomes. Unless the public provides legislators with an electoral incentive to be bipartisan (and it doesn’t appear as though that is likely), partisan, polarized legislative politics will continue to be the norm in U.S. legislatures.

This article is based on the paper ‘Ideological Heterogeneity and Legislative Polarization in the United States’ in Political Research Quarterly.