Increasing the provision of public transport is not only desirable in a time of concern over climate change and high fuel prices, it may also have important effects on employment and wages. Using current and historic data from over 360 U.S. metropolitan areas, Daniel G. Chatman and Robert B. Noland argue that public transport increases employment in central city areas, whilst also leading to higher wages in these areas totaling from between $1.5 million and $1.8 billion yearly depending on the city.

Cities may become more productive when they expand their public transportation networks, if public transport investments lead to larger employment clusters and encourage metropolitan population growth. The benefits of such changes to physical agglomeration (or clustering) caused by transit improvements may consist of several different aspects, such as increasing the effective size of the labor force, making better matches between worker skills and employer needs in hiring, and increasing informal information sharing among skilled workers and innovating firms. These phenomena are called agglomeration economies, and they are of particular interest to public policy because they are classic economic externalities— they consist of benefits that accrue only partly to firms when they make their location choices. Each additional firm in such a cluster may also bring benefits to the other firms there.

Although planners and academics have argued that public transportation can improve urban economies and provide more and better opportunities for people living and working in urban areas, the relationship is not simple. First, in some cases transit services may just redistribute development rather than creating new economic activity. Second, by reducing transport costs, rail and bus service improvements could lead to cheaper land, sprawl and de-densification, and reduced proximity of firms, workers, and consumers to each other. Such results have often been attributed to road expansion, but there is some evidence they can be caused by public transportation services as well. 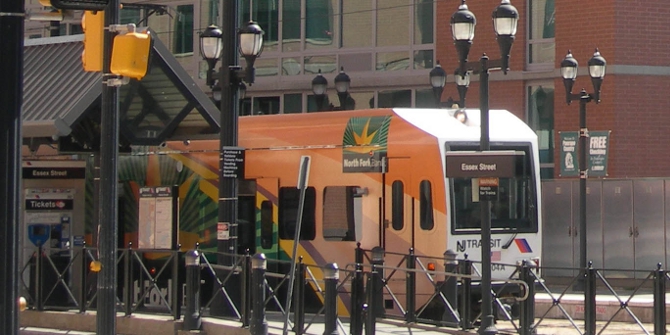 We relied largely on data from publicly available sources. We obtained track-miles of rail service, bus and rail seat capacity, and bus and rail service miles from the American Public Transportation Association and the National Transit Database of the Federal Transit Administration. For our agglomeration measures, we used US Census data in a geographic information system to calculate central city employment density, and urbanized area employment density, along with metropolitan area population. Finally, we measured productivity using wages per capita and gross metropolitan product (GMP) per capita, obtained from the US Bureau of Economic Analysis. We were able to assemble complete data on about 90 percent of the 364 metropolitan areas in the United States.

To strengthen the causal interpretation of our statistical models, we used what are called “instrumental variables,” factors that may have influenced the development of public transportation services in the past, but that would not be expected to be associated with the current public transportation system. These included the rail right-of-way existing in 1898, the metropolitan area population in 1900, the share of the metropolitan area covered in water (which might constrain land availability), and a climate index (as climate has been shown to be correlated with transit use).

These results have implications for transportation policy, and particularly for assessing the costs and benefits of proposed improvements to public transportation services. Traditional cost-benefit approaches do not consider possible productivity effects from changes in physical agglomeration. We estimated that annual wage increases from a 10 percent increase in bus or rail seats per capita, or rail service miles per capita, averaged $45 million and ranged from a low of $1.5 million to as high as $1.8 billion across metropolitan areas in the US, per year. Cities that are larger in population, that have higher central city employment density, or that enjoy larger public transit networks, are estimated to benefit most from additions to public transportation service.

For urban planners and cities debating whether and how to improve public transportation services, these results suggest that large metropolitan areas with significant road congestion should expect large economic benefits if those improvements enable employment densification in central cities.  Improvements to public transport in other locations may benefit lower-income households and others who rely on bus or rail, but are less likely to increase region-wide economic productivity.  As metropolitan areas become more congested, it will become particularly important to better understand the relationships between public transportation, agglomeration, and productivity in order to make public transportation investments with the greatest benefits.

This article is based on the paper Transit Service, Physical Agglomeration and Productivity in US Metropolitan Areas in Urban Studies

Daniel G. Chatman – University of California, Berkeley
Dan Chatman is on the faculty of city and regional planning at UC Berkeley. His research areas of interest include travel behavior and the built environment; residential and workplace location choice; and the connections between public transportation, immigration and the economic growth of cities.

Robert B. Noland – Rutgers University
Robert B. Noland is a Professor at the Edward J. Bloustein School of Planning and Public Policy and serves as the Director of the Alan M. Voorhees Transportation Center at Rutgers University. The focus of Dr. Noland’s research is the impacts of transport planning and policy on both economic and environmental outcomes. Work on economic effects has included examining behavioral reactions to changes in reliability, associations with the built environment, and trip chaining behavior. Environmental work includes impacts on safety, climate, health, and other factors associated with overall quality of life.