Research on electoral structure has often touted single member districts to be beneficial for achieving minority representation.  In a study of a national sample of school board elections between 2002 and 2008, Kenneth J. Meier and Amanda Rutherford find an unanticipated trend—African Americans are now over-represented on school boards with at-large elections when they are a minority of the population. They argue that partisanship changes the relationship between electoral structure and race so that African American may benefit in counties with a majority Democrat constituency.   The traditional pattern of African-American under representation occurs only in school districts with a Republican voting majority.

In a 5-4 vote, the Supreme Court recently invalidated a portion of the 1965 Voting Rights Act by allowing states with a history of discrimination to change election laws without obtaining federal approval.  The closely divided vote reflected disagreement over whether minorities continue to face barriers in elections.  The effects of this ruling were felt immediately.  Following the decisions, the state of Texas announced that it would implement a voter identification law; several other states have followed suite in considered similar policy changes and several local governments have proposed changes in electoral districts.

Since the Voting Rights Act was passed, scholars have studied whether electoral structures matter in helping or hindering the descriptive representation (where elected representatives represent the characteristics of their constituencies as well as their preferences) of minority groups.  This research has primarily taken place at the local level, the only level of government with multiple electoral structures.  At-large systems elect all representatives from an entire jurisdiction while ward or single-member districts divide a jurisdiction into smaller units in which candidates run for a single seat.  Single-member districts have largely been linked to higher levels of representation for minorities because the use of districts may allow minorities to constitute a majority of voters for one or more seats in the jurisdiction.

In the U.S., nearly sixty five percent of school board elections use at-large systems while thirty five percent operate as single-member districts.  Studying U.S. school board elections in 2002, 2004, and 2008 for school districts with over 5,000 students, we find that African Americans are overrepresented, on average, in at-large districts when African Americans are a minority of a population.  This relationship is largely unprecedented given the strong theoretical reasons for underrepresentation.

What underlying factors might theoretically be driving this observed overrepresentation?  We tested whether the differences in representation between the two electoral structures were driven by the racial distribution of students in schools, the voting age population, prior successful black school board candidates, coalitions with Latinos, and the presence of noncitizens.  However, none of these factors altered our finding.

If we view electoral structures as simply a set of rules with biases, the logical way to overcome these biases, in theory, is to create a bloc of candidates to run together or to create a coalition to support a single candidate.  Who might have an incentive to put together a slate of candidates or a coalition?  One possibility is the Democratic Party, a political group interested in gaining additional African American votes.  Though school board elections are nominally nonpartisan, where the Democratic Party constitutes a voting majority in a school district, they have an incentive to build stronger ties with African Americans to foster electoral support to win elections other than the school board. 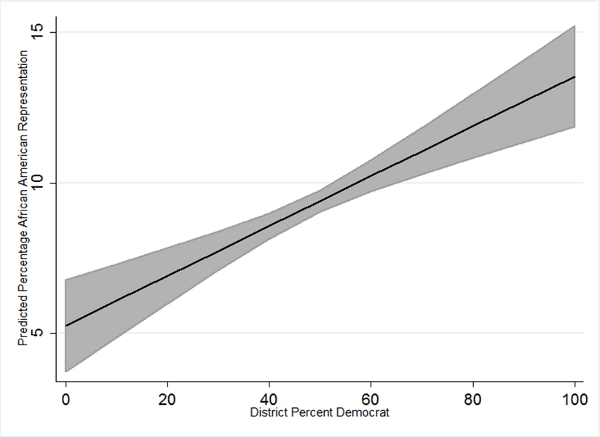 This article is based on the paper ‘Partisanship, Structure, and Representation:  The Puzzle of African American Education Politics” in the American Political Science Review.