Bank lending was at the heart of the Global Financial Crisis when it began in 2008, with the collapse of subprime and ‘piggyback’ loans having detrimental effects. Using newly-discovered archival documents and a newly-compiled dataset from 1934, Natacha Postel-Vinay looks at the lessons of the Great Depression. She writes that the prevalence of ‘second mortgages’ (loans which supplemented regular mortgages due to borrowing limits) led to higher rates of foreclosure. This, in combination with a protracted foreclosure process, helped to severely weaken the liquidity of banks in the 1930s, contributing to their failure.

Much like the recent crisis, the U.S. Great Depression saw serious and widespread troubles among banks. Also like the recent crisis, the U.S. Great Depression was preceded by a large nationwide boom in real estate, peaking in 1926. Unlike in the current crisis, however, the interwar link – if any – between the real estate boom and the subsequent bank failures has been far from evident. An important argument against the existence of such a link has to do with the extraordinary conservatism of mortgage contracts at the time. The average commercial bank mortgage contract had a maturity of only three to five years, and required a down payment of 50 per cent of the property value. This in theory would have significantly reduced both foreclosure risk and the negative consequences of foreclosures for banks. 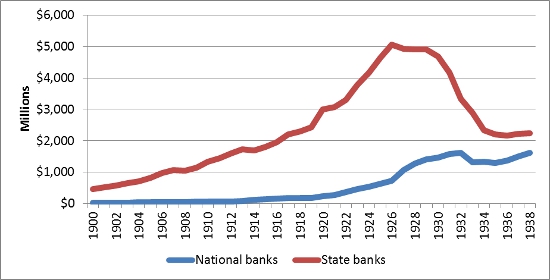 Source: Board of Governors of the Federal Reserve System (1956)

My research re-examines the question and uncovers the darker side of 1920s U.S. mortgage lending: the so-called “second mortgage system,” one of the most widespread — and yet least well-known — forms of debt dilution in the twentieth century. As a majority of borrowers in fact could not make a 50 per cent down payment, they took on a second, junior mortgage from another lender (a small firm or individual) to help with the high down payment. This “diluted” original debt as it greatly reduced borrowers’ capacity to pay back the first loan from the original bank. Default risk on first mortgages proportionately increased, thereby putting original banks’ health under threat.

While the negative effects of debt dilution are well documented in the theoretical economics literature, its prevalence in the 1920s U.S. commercial bank mortgage market is much less so. This is despite contemporaries, such as President Hoover, describing the second mortgage system as “the most backward segment of [the U.S.’s] whole credit system.”

Borrowers in the 1920s would have an incentive to conceal the fact that they were taking a second mortgage to make the high down payment. This is because they would either fear that first lenders (banks) would simply refuse such a deal, or that they would agree to such a contract but would increase interest rates on first mortgages accordingly. Concealment of second mortgages may have been relatively easy as, on the one hand, they were a relatively new phenomenon, and, on the other hand, they were mainly provided by very small institutions and individuals who were not regulated by law. The lack of good records on second mortgages may in fact partly explain their quasi-disappearance from traditional accounts of 1920s mortgage lending.

If, as a consequence, banks wrongly assumed that no second mortgage had been taken, they would suffer from straightforward debt dilution – efforts to pay back the first loan would be diluted by the existence of the second loan. Should banks, on the other hand, fear the use of second mortgages, they would increase interest rates on first mortgages, which would also lead to a higher probability of default.

In addition, because second mortgages were junior before the law, and thus carried extra risk in case of foreclosure, second mortgage lenders asked for shorter maturities, much higher interest rates (often averaging 12 percent) and more frequent principal repayments than banks did. This further impaired borrowers’ ability to repay first mortgages, as they started focusing on paying back second mortgages whose repayment was more urgent.

Examining a newly compiled dataset on commercial bank mortgages made in 22 U.S. cities before the Great Depression started, I find evidence that low loan-to-value ratios (LTVs) led to higher foreclosure rates in those cities. The data are taken from the Survey of Urban Housing published in 1937 by the Department of Commerce under the supervision of David L. Wickens. While the data do not allow one to analyse each mortgage individually, it exploits variation in average LTVs and foreclosure rates on first mortgages between cities to examine the nature of the relationship between the two variables. The result is a strong negative correlation: the lower the loan-to-value ratio, the higher the probability of foreclosure. This result would be counter-intuitive to observers without knowledge of the second mortgage system. However, the existence of the second mortgage system explains it perfectly. 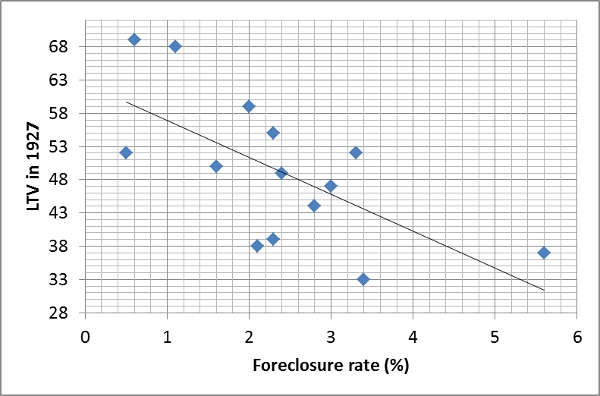 Finally, I provide evidence that the foreclosure process was particularly lengthy at the time, often lasting up to eighteen months. This meant that although house prices usually did not fall by more than 50 percent in the Great Depression, implying few losses for commercial banks, the latter would be seriously weakened by an increased probability of default. A protracted foreclosure process meant that a house would be difficult to turn quickly into cash – a great impediment in case of a liquidity crisis. As most commercial banks lost tremendous amounts of deposits starting in 1930, higher probabilities of foreclosure no doubt severely weakened the liquidity of those banks, thus contributing to their failure.

Even though first mortgage contracts have changed considerably, the 2000s saw the re-emergence of mortgages with so-called “piggybacks” attached to them – simply a new expression for second mortgages. Recent research by Mayer et al. (2009) and LaCour-Little et al. (2011) has indeed shown that by 2006-7 the share of Alt-A (just above subprime) mortgages with piggybacks rose to 42 percent, and that the share of subprime mortgages with piggybacks reached 28 percent. They found that such loans had a significantly higher probability of default.

Although incentives for taking piggybacks were quite different then, my research is a timely reminder that second mortgages can be hazardous to lenders and borrowers alike. It presents extensive qualitative and empirical evidence of the extent of the second mortgage system and of its negative consequences for commercial banks during the Depression, and in so doing provides further empirical evidence that debt dilution can be detrimental to credit more generally.

This article is based on the EHES Working Paper, ‘Debt Dilution in 1920s America: Lighting the Fuse of a Mortgage Crisis’