Younger Blacks are less likely to suggest that discrimination explains racial disparities, tending to ascribe them to Blacks’ lack of will to “pull up their bootstraps.”

Younger Blacks are less likely to suggest that discrimination explains racial disparities, tending to ascribe them to Blacks’ lack of will to “pull up their bootstraps.”

Five decades on from the end of institutionalized segregation in the U.S., racial disparities between blacks and white endure. Despite these persistent inequalities, there has been a shift among Blacks away from believing that these disparities are caused by continuing discrimination and prejudice. In new research, Candis Watts Smith finds that this change in attitudes is has been driven in part by the growing cohort of young blacks who have grown up in an America that eschews institutional racism. She writes that Blacks born after 1976 are more likely to suggest that racial disparities are due to Blacks’ lack of motivation to pull themselves out of poverty, rather than because of structural discrimination.

One of the most powerful social cleavages shaping American public opinion is the divide between Blacks’ and Whites’ attitudes on matters concerning racial disparities, but this gap is closing. Researchers like Katherine Tate show that there has been a shift toward conservatism in Black Americans’ attitudes. There have been incredible and positive changes in the United States’ racial landscape, but there continues to be a gap between Whites and Blacks on important indicators, such as educational attainment, employment rates, wealth and even health. Despite these persistent inequalities, there has been a shift among Blacks in the extent to which they believe systematic racial discrimination and prejudice are the primary reasons that Blacks continue to lag behind Whites.

My research makes an effort to discern the mechanisms undergirding these changes. Are we seeing a shift to the right because Blacks, in general, have changed their attitudes in response to significant sociopolitical transformations that have occurred over the past few decades? Or, is this shift occurring due to cohort replacement— in other words, is the shift led by young Blacks, who have been born and socialized in an America that eschews racism, values diversity, and aspires to be colorblind? I find that Blacks are increasingly likely to believe that inequalities because of cohort shifts – those born after 1976 are more likely to suggest that if Blacks were more motivated to pull themselves up out of poverty, they could do so.

Traditionally, White Americans have relied on person-centered explanations of racial disparities; they tend to focus on individual motivation and Blacks’ will or lack thereof to “pull up their bootstraps.” While Black Americans also employ these individualist attributions, they also tend to incorporate structural-based explanations of Black disadvantage. These explanations are important to track because they are linked with policy preferences, especially those policies that aim to reduce disparities between racial groups. Given the strong link between an ideology of individualism and conservative racial policy preferences, given the fact that significant racial disparities between Whites and people of color persist, and given that conservatism (particularly as it concerns the government’s role in reducing inequality) has traditionally been denounced by Black Americans, it comes as a surprise that members of this group have been increasingly likely to employ individualist explanations of Black disadvantage.

Popular theories of social change suggest that we see transformations in culture, social norms, attitudes and behaviors primarily due to two mechanisms: period effects and/or cohort effects. Period effects are denoted by aggregate changes that occur over time due to a very large proportion of the population’s shared reaction to large scale social, political and economic developments. Cohort effects occur when young people who are exposed to a specific set of environmental factors and events replace older birth cohorts who experienced a markedly different set of significant events, values and norms.

A period effects explanation would point to some of the large scale changes that are likely to influence Blacks’ attitudes about the extent to which structural racism plays a role in group members’ lives: public spaces have been legally desegregated, overt racism has become socially unacceptable, a large Black middle class emerged in the 1980s, the number of Black political representatives has increased over the past two decades, and the American electorate selected its first Black president in 2008.

On the other hand, a cohort effects explanation would point to the influence of the replacement of older Blacks whose experiences shaped their attitudes in one way by a new generation that has a very different perspective on how the world works. Blacks who have lived and came of age during the Jim Crow era and/or through the protracted processes during the 1960s and 1970s that brought American race relations where they are today may have distinctly different attitudes from those who are younger, and thus further removed from these intense racial struggles.

I use the General Social Survey (GSS) to examine changes in Blacks’ explanations of the Black-White socioeconomic gap over time. Between 1985 and 2010, the GSS asked Black respondents the following question in 16 waves: “On average, Blacks have worse jobs, income and housing than White people. Do you think these differences are (a) mainly due to discrimination, (b) because most Blacks have less in-born ability, (c) because most Blacks do not have the chance for education that it takes to rise out of poverty, and/or (d) because most Blacks just don’t have the motivation or willpower to pull themselves out of poverty?” Respondents can answer “yes” or “no” to each of the explanations; they are not limited to affirming only one of the four explanations. Researchers tend to classify responses to (a) “discrimination” and (c) “education” as “structuralist” attributions. And affirmative responses to (b) “ability” and (d) “motivation” are characterized as “person-centered” or “individualist” responses. These attitudes are not mutually exclusive.

Figure 1 illustrates the average response of Blacks over time. What we see is that reliance on both structuralist attributions—“discrimination” and “education”—have declined between 1985 and 2010 while one of the individualist attributions—“motivation”—has slowly increased over the same time. More specifically, in 1985 about four out of five Blacks believed that racial discrimination was a primary reason for disparities between Whites and Blacks, but this declined to 60 percent between the years of 2006-2010. Similarly, there was a decline from 74 percent in 1985 to 52 percent in the most recent time period of those who believed that lack of educational opportunities was a reasonable explanation of racial disparities. 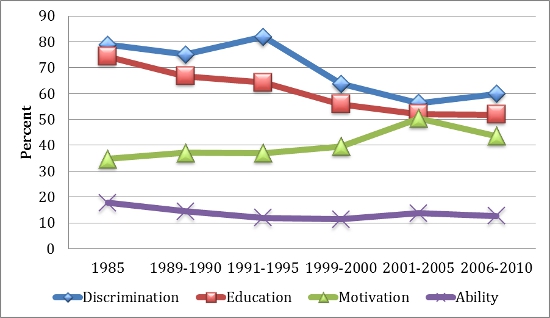 Meanwhile, Figure 2 compares attitudes across birth cohorts. The eldest people interviewed were born in 1906; the youngest were born in 1990. This figure shows that older Black Americans are more likely than younger Blacks to rely on structural-based attributions of Black disadvantage while those in later cohorts are more likely to agree that Blacks lag behind Whites because Blacks are not motivated to do well. However, if we depend on either of these two figures—one that focuses on change over time or one that homes in on cross-generational differences—we cannot disentangle whether attitudinal changes are due to shifts among the entire group over time (period effect) or due to young people ushering in a new set of attitudes (cohort effect). 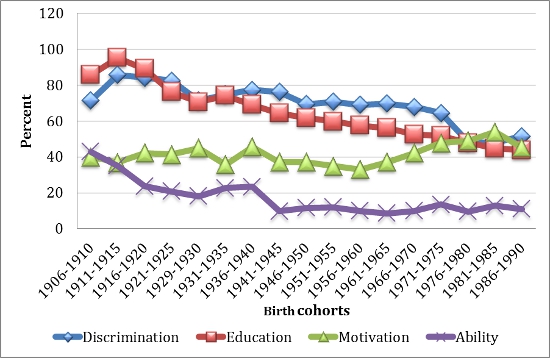 Scholars have had a difficult time parsing out cohort effects from period effects because of a statistical conundrum called the identification problem, but a recently developed methodology helps us to solve this challenge. In turn, we can get a better sense of the extent to which each of these mechanisms of social change is at play. I use a method called the Age-Period-Cohort Intrinsic Estimator to figure out which or the extent to which either period effects or cohort effects are at play. If we don’t account for one while considering the other, then we will have misleading expectations of social change.

Overall, I find when we account for cohort effects, we see that period is strongly associated with the two structural explanations of the Black-White socioeconomic gap. That is to say, in general, there has been a marked declined in Black Americans suggesting that racial discrimination or lack of educational opportunities are important reasons for racial disparities; a decline in these attributions have occurred almost consistently and monotonically after 1996.

This is an important finding because it reveals that Blacks’ perceptions about the role of race and the reality of the role of race seem to be diverging. For example, schools in the U.S. have been in a process of continuous re-segregation since the early 1990s. In 2005, almost 75 percent of Black and Latino schoolchildren attended schools that are predominately Black or Latino; we know that race, poverty and quality of education are closely linked. It appears that Blacks are increasingly likely to believe that inequalities in outcomes are not structural even though there is strong empirically-based evidence that suggests otherwise.

Controlling for period effects, I find that cohort variation has an additional effect on the decline in reliance of “discrimination” as a key explanation. More specifically, I find that while there is little cohort variation in attitudes about the role of discrimination among those born between 1906 and 1976, there is a shift in these attitudes once we begin to look at younger cohorts, especially those who are in the Millennial Generation and the tail end of Generation X. We know that younger Americans, generally, tend to be more optimistic about their chances of success; perhaps what we’re seeing is how this optimism is translated in the realm of racial issues and racial policies for young Blacks, more specifically. Blacks born after 1976 are less likely to suggest that discrimination is a key explanation of racial disparities, and trends suggest that young Blacks are more likely to agree that if Blacks were more motivated to pull themselves out of poverty, they could do so.

Structural attributions of the Black-White socioeconomic gap increase support for policies that are aimed to reduce racial disparities while individualist attributions do just the opposite. The policies supported by people who rely on individualist attributions tend to disproportionately and negatively affect the life chances of people who belong to racially under-represented groups. The findings here are troubling given the on-going inequality in the criminal justice system, persistent wealth inequality, re-segregation of American schools, racial discrimination in job employment processes, and the like. This research raises questions about who will be wiling and able to speak up on issues of racial inequality in an era of colorblindness.

This article is based on the paper, “Shifting from Structural to Individual Attributions of Black Disadvantage: Age, Period and Cohort Effects on Black Explanations of Racial Disparities” in the Journal of Black Studies.