Few would disagree that there is little apparent common ground remaining between Democrats and Republicans in Congress, but is the American public just as polarized? Douglas J. Ahler sampled over 2,000 respondents on their own political leanings and their judgments of how liberal and conservative others are. He finds that respondents tended to overestimate polarization in the mass public, including that of those on their, and on the other side, of the ideological spectrum. He also finds that overestimating polarization among one’s peers leads individuals to adopt more extreme political attitudes.

It’s hard to talk about contemporary American politics without mentioning polarization. By many accounts, the nation’s two political camps are more divided than they’ve been at any point in the last century. According to this perspective, the common ground between Democrats and Republicans has vanished as partisans have grown increasingly ideological and extreme. Few would disagree that this sorry state of affairs characterizes Congress (and American politicians in general), but division within the public is much more nuanced: most citizens lack major ideological consistency in their issue positions and tend to claim relatively centrist broad political values.

Do citizens recognize that they aren’t divided into two firmly entrenched ideological factions? There are reasons to suspect that they don’t. First, evaluations of group exemplars—like party politicians, who are quite polarized—can affect evaluations of ordinary group members. Second, mass media and politicians themselves frequently sensationalize politics and rely on a polarization narrative (recall 1994 as “The Year of the Angry White Male”) to explain election outcomes, despite citizens’ tendency to vote according to performance or other judgments of candidate’s competence. Finally, social psychology research provides evidence that people understand social groups like “liberals” as prototypes (or mental images), and that they construct these prototypes to contrast most greatly with relevant comparison groups—in this case, “conservatives.”

To find out whether or not the public misperceives how polarized it is, I conducted a survey experiment on the Spring 2013 Institute of Governmental Studies California Poll, a representative survey of California voters. I randomly assigned half of the sample of 2,444 respondents to place themselves on two 7-point scales measuring broad political predispositions: the role of government in guaranteeing economic and social welfare and the importance of environmental protection vis-à-vis economic growth. I asked the other half of the sample how they thought “Californians who call themselves liberal” and “Californians who call themselves conservative” would answer those same questions. To determine whether perceptions match reality, I compared the responses from self-identified liberals and conservatives in the first half of the sample to the beliefs about liberals and conservatives from the second half of the sample. 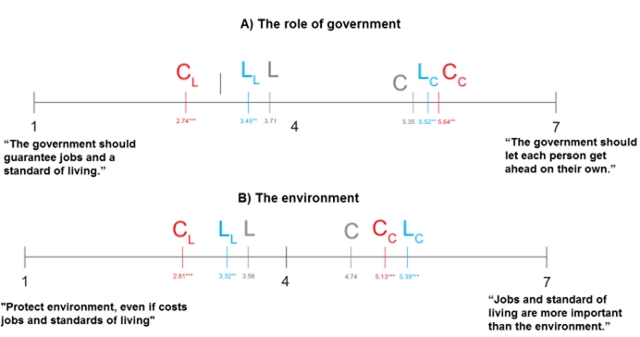 Why should we care? In a second experiment, conducted on Amazon’s Mechanical Turk (which crowd-sources tasks that cannot be done by computers), I demonstrate the consequences of misperceived public polarization. In particular, I ask whether overestimating polarization among one’s peers leads individuals to adopt more extreme political attitudes of their own.

To test this, I randomly assigned one group of respondents to learn the actual average predispositions of liberal and conservative Americans on three broad political values: the role of government, health care, and the environment. I did not provide this information to other respondents but instead, much like the second group in the first study, simply asked them where they thought liberals and conservatives stood on those same political topics. I then asked all respondents to give their opinions on six policy questions related to those three broad topics. Respondents who learned the truth about their peers’ relatively centrist predispositions subsequently reported policy opinions that were 8 percent more moderate, on average. So while the public does not appear to be deeply ideologically polarized, our belief that it is leads us to be somewhat more extreme than we otherwise would be.

A final caveat is necessary. While this is one of many studies showing that citizens are not highly polarized and that they express relatively centrist political values, I don’t deny the existence of extreme opinions in the mass public. With my colleague David Broockman, I am currently researching the nature of citizens’ ideological consistency, issue opinions, and their effects on voting behavior. We observe that surprisingly high numbers of Americans endorse issue positions outside the political mainstream and that many citizens who appear moderate are actually cross-pressured: their issue positions are not consistently liberal or conservative, but they often hold extreme positions on both sides of the political spectrum. For example, a handful of respondents apparently want to establish a national maximum income and ban abortion outright.

But it’s also important to note that attitudes on single issues are more easily swayed than political values and broad predispositions. Opinions can shift with new information and diverted attention: John Zaller aptly describes citizens as forming and reporting these opinions by sampling from a variety of top-of-the-head considerations. These considerations take many forms, like actual facts that one might find in a newspaper, or where a popular politician stands. My experiment shows that people’s perceptions of their peers’ political predispositions also function as considerations in opinion formation. Since these perceptions tend to be biased toward extremity, individuals’ own opinions also appear to skew more extreme than they otherwise would. Those looking to cool the political climate and reengage citizens in constructive political dialogue may thus find a glimmer of hope: citizens may be more hesitant to adopt positions outside the mainstream if they know that’s where those positions lie.

This article is based on the paper ‘Self-Fulfilling Misperceptions of Public Polarization’ in the Journal of Politics.

Doug Ahler – University of California, Berkeley
Doug Ahler is a Ph.D. candidate in the Charles & Louise Travers Department of Political Science at the University of California, Berkeley. His dissertation research concerns Americans’ political perceptions of parties, politicians, and peers, with an emphasis on the consequences of misperception for political behavior and democratic accountability.

July 24th, 2014|Democracy and culture, Doug Ahler, Elections and party politics across the US|0 Comments
Previous post Next post