Why does the productivity of Latin America lag so far behind that of the United States? In new research, Francesco Caselli uses a development-accounting analysis to begin to explain these differences. By comparing the differences in income per worker between Latin American countries and the US to the differences that would exist if these countries differed only in their stocks of physical and human capital, he finds that Latin American countries only use their capital about half as efficiently as the US. This points to a need to understand the technological and institutional constraints that hamper the efficient use of capital.

The average Latin American country produces about 1 fifth of the output per worker of the US. What are the sources of these enormous income gaps? A first stab at this question can be made by performing a development-accounting analysis.

Development accounting posits that developing countries have lower incomes per worker because (i) they have less physical capital (machines, structures, and natural resources) per worker; (ii) their workers are less well educated, or less healthy (and hence energetic) – i.e. they have less human capital per worker; and (iii), they use their physical and human capital less efficiently. It then compares differences in income per worker between developing and developed countries to the differences that would exist if these countries differed only in their stocks of physical and human capital.

Such calculations can serve a useful preliminary diagnostic role before we engage in deeper and more detailed explorations of the fundamental determinants of differences in income per worker. If differences in physical and human capital — or capital gaps — are sufficient to explain most of the difference in incomes, then researchers and policy makers need to focus on factors holding back investment (in machines and in humans). Instead, if differences in capital are insufficient to account for most of the variation in income, one must conclude that developing countries are also hampered by relatively low efficiency at using their inputs – efficiency gaps. The research and policy agenda would then have to focus on technology, allocative efficiency, competition, and other determinants of the efficient use of capital.

In recent research, I used development-accounting to look at output for 2005 for Latin America, finding that on average, Latin American countries have less than half the human and physical capital of the US, and they use this capital only half as efficiently as the US does. To come to this conclusion, I use measures of physical capital that exploit historical data on investment in machines and structures, and also take into account natural resource deposits such as minerals and timber. I construct measures of human capital that take into account differences in years of schooling (years of schooling of the average worker in the labour force), indicators of health (as proxied by mortality rates), and indicators of cognitive skills (as proxied by internationally-comparable tests, which may reflect differences in the quality of education or other determinants of differences in cognitive skills).

The figure below illustrates my benchmark results. For each country, the overall height of the bar is relative capital, while the height of the shaded bar is relative income. The lower horizontal line shows the sample mean (the higher line is the mean of a subsample). Since the overall bars are all considerably less than 1, it is clear that Latin America suffers from a significant capital gap. Indeed the sample mean (indicated by the lower of the two horizontal lines) is 44 percent. Hence, the average Latin American country has less than half the capital (human and physical) per worker of the US. 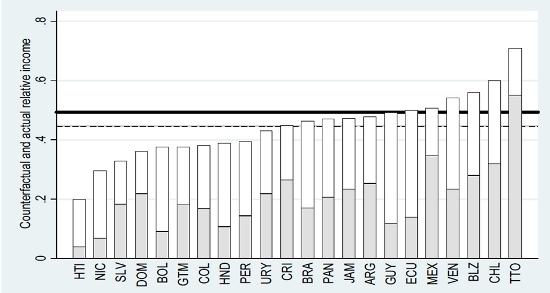 Nevertheless, it is also clear that relative capital is much larger than relative income – indeed twice as large on average. This means that differences in income between Latin America and the USA cannot be ascribed uniquely to capital gaps. Indeed, the difference between income gaps and capital gaps implies that efficiency gaps are roughly as large as capital gaps. Hence, the average Latin American country not only has less than half the capital (human and physical) per worker of the US, but also uses this capital only half as efficiently as the US!

In assessing this evidence, it is essential to bear in mind that efficiency gaps contribute to income disparity both directly — as they mean that Latin America gets less out of its capital — and indirectly — since much of the capital gap itself is likely due to diminished incentives to invest in equipment, structure, schooling, and health caused by low efficiency. The consequences of closing the efficiency gap would correspondingly be far reaching.

Explaining the Latin American efficiency gap is therefore a high priority both for scholars and for policy makers. It is likely that this task will require firm-level evidence. Firm level evidence would also be invaluable in checking the robustness of the development-accounting results, which are subject to severe data-quality limitations.

This article is based on the LSE’s Centre for Macroeconomics Discussion Paper ‘The Latin American Efficiency Gap’. The research was financed by the World Bank and will appear in a forthcoming volume on growth in Latin America.

Francesco Caselli – LSE Economics
Francesco Caselli is the Norman Sosnow Professor of Economics at the LSE. He is director of the Macroeconomics Program at the Centre for Economic Performance (CEP), and a fellow of the British Academy. His research interests include economic development and political economy.