How might social scientists best account for the widespread acceptance of such unlikely sounding claims such as those put forward by the 9/11 Truth Movement, or those concerning the alleged foreign birth of President Obama? While comparably “ignorant” or “bizarre” beliefs might seem unremarkable in societies characterised by authoritarian rule, state controlled media and low levels of literacy, Stephen E.M. Marmura asks how does one hope to explain the persistence and apparent growth of conspiracy theories in developed countries such as the United States or Britain, which boast high levels of education, freedom of expression, political openness, and competitive, privatised, mass media institutions?

This is the problem I explore in a recent paper entitled, Likely and Unlikely Stories: Conspiracy Theories in an Age of Propaganda. In it, I argue that most scholarly considerations of conspiracy theories have failed to take full account of the basic character of an overall media environment wherein most information accessible to the public is actively shaped by commercial and/or state interests. Put more bluntly, I argue for closer attention to the potential relationships between top-down propaganda on the one hand and popular expressions of conspiracy theorising on the other.

In many recent instances of conspiracy theorising, linkages are discernible between dominant media narratives and news framing practices, and the receptiveness of much of the public to ideas or explanations of events which might otherwise be deemed unworthy of serious consideration. I consider two general cases, each of which represents a different type of potential response to the presence of systemic propaganda in the mainstream media.

The first concerns claims to the effect that President Barack Obama is secretly a Muslim who is colluding with Islamic organisations attempting to impose Sharia (Islamic) law on the American people. This case is illustrative of a situation in which a conspiracy theory clearly had its origins in “agitation propaganda”, namely propaganda designed to instill fear and hostility towards a selected target. In such instances spurious claims may gain acceptance due to their compatibility with longstanding media themes and narratives broadly supportive of existing relations of power; what the French social theorist Jacques Ellul termed “integration propaganda”.

Negative media portrayals of Arabs and/or Muslims stretch back to the early years of Hollywood, but intensified significantly from the late 1940s onward. Not coincidentally this is when the US became the dominant power in the Middle-East, adopting and extending the divide and rule policies it inherited from Britain and France. US policies in the region, which have included repeated unlawful military invasions, support for unpopular dictatorships, successful and unsuccessful attempts to overthrow democratically elected governments, and diplomatic cover and material support for Israel’s illegal occupation of Arab lands, have required a sustained propaganda effort to present such actions as both moral and necessary.

Hence, massive US military involvement in the region is framed not in terms of a desire to maintain control over coveted oil resources, but rather as evidence of America’s unshakeable commitment to regional stability and democracy. Likewise, any Arab resentment of US policies is not to be understood as a predictable response to the divide and rule practices referred to above, but rather as an expression of the backwardness and irrationality of Islam.

Interestingly, the same type of integration propaganda which may lay the groundwork for acceptance of conspiracy theories about Muslims, may at other times provoke conspiracy theorising of a rather different sort. Consider recent western involvement in Syria. How exactly should an attentive observer interpret the fact that the US and its closest allies are actively assisting an insurgent campaign overwhelmingly dominated by Al-Qaeda affiliated Jihadist groups; one which a recent NATO assessment estimates has the support of only 10% of the Syrian people? 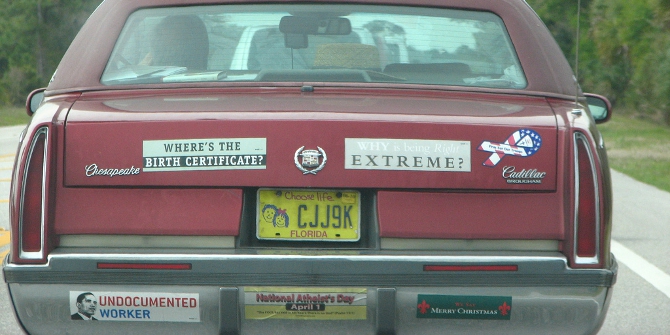 Regardless of what alternative explanations such observations may ultimately provoke it is difficult to imagine one less likely sounding than the notion that the policies in question reflect a desire to fight terrorism, protect civilians and promote democracy. In fact, many expressions of integration propaganda are being put to the test at a time of costly and seemingly unending military interventions abroad, intrusive and unconstitutional domestic surveillance practices at home, bailouts for banks at taxpayer expense, and the rapid decline of a once prosperous middle class. This reality holds relevance for the second case study I consider, namely the conspiracy beliefs of the 9/11 Truth Movement.

“Truthers” believe that the US federal government played either a direct or indirect role in facilitating the terrorist attacks of September 11, 2001. In my treatment of these beliefs, I argue that when integration propaganda may readily be exposed as lacking credibility, conspiracy theories may gain acceptance as alternatives to official accounts, particularly from among the more politically oriented and/or disillusioned. In this light it is worth taking note of the motivation posited by Truthers for the US government’s alleged crime, namely to justify an unending War on Terror abroad and the consolidation of a police state at home. Significantly, Truther arguments have gained support amongst groups and individuals associated with both the traditional left and the populist right, and reflect a deep distrust of the existing political system.

Despite clear differences, the two types of conspiracy theory referred to above do hold something important in common. Simply put, they suggest a growing awareness amongst the citizenry that the mainstream media do not represent the public sphere of open deliberation and rational debate promoted in democratic theory, but rather reflect the interests of powerful entities whose outlines are often difficult to discern. If the challenge facing citizens/consumers seeking greater political transparency were restricted to the tactical matter of extracting the necessary facts from an excess of information, the phenomenon of conspiracy theorizing might be far less pervasive.

However, a communication environment characterised by advertising, public relations and propaganda actively discourages critical thought while making truth claims difficult to assess. Whether this results in a reflexive acceptance of only those claims compatible with one’s preconditioned prejudices, or a radicalised suspicion of all accounts of reality deemed “mainstream”, the result clearly presents a challenge to the advancement of rational deliberation, informed civic engagement, and democratic life.