The recent announcement from high profile companies such as Google and Facebook that they will no longer be working with the conservative American Legislative Exchange Council (ALEC) has brought the role and influence of the group into sharp focus.  In new research, Alexander Hertel-Fernandez finds that states with more conservative legislators and those that viewed business as a key constituency were more likely to enact ALEC bills. He also finds that states that spent less money on their legislatures, and those where legislators spent less time on legislation were also more likely to enact ALEC bills. He argues that this trend undermines the idea that these types of ‘citizen legislatures’ will be more independent and that they necessarily serve the interests of ordinary citizens.

The American Legislative Exchange Council (or ALEC) is back in the news again, as several prominent tech companies – like Google and Facebook – have publicly announced that they are severing ties to the conservative political association of corporations and state lawmakers. By now, ALEC’s structure and activities are well-known to the public, thanks to a slew of  investigative reporting on the group: major companies join ALEC, paying potentially hundreds of thousands of dollars in dues and sponsorship fees for the ability to write “model bills”, which are disseminated to ALEC’s some 2,000 state legislative members across the country (representing just under a third of all state legislators). Until recently, the forty year-old ALEC model – what NPR described colorfully as a “dating service” for state politicians and companies – was quite successful. By the group’s reckoning, legislators enacted 115 bills in 2009 that were based on its model proposals (826 were introduced).

These model bills, unsurprisingly, are closely aligned with the financial interests of its member firms; for instance, energy providers have promoted bills that would stymie state efforts to address climate change or promote renewable energy; private prison providers have participated in ALEC task forces promoting bills to privatize prisons; and tobacco manufacturers have sought to scuttle regulation of their products. Other prominent cases of controversial ALEC model bills in recent years include the “Stand Your Ground” law authorizing the use of lethal force in self-defense, which was cited in the shooting death of Florida teenager Trayvon Martin; proposals to weaken public sector labor unions, such as those passed in Wisconsin; voter ID laws that would make it more challenging for particular subsets of disadvantaged citizens to vote; and punitive legislation cracking down on illegal immigrants in Arizona.

What is less clear from media accounts of the group is why individual state legislators would participate in the organization and rely on its model bills. In recent research, I answer that question using leaked internal documents from ALEC. I created a dataset of the states that enacted ALEC bills in 1995, as well as the individual legislators who authored and sponsored those bills. This dataset permits me to test a variety of explanations for why state lawmakers would turn to ALEC for policy ideas and language.

Apart from offering insight into a substantively interesting organization that has played an important role in American politics in recent decades, my data also provides an opportunity to systematically test theories of business power long debated in the social sciences. Indeed, in many ways ALEC offers an ideal case study for scholars interested in questions of corporate influence in the policymaking process. Its model bills, for instance, give scholars a remarkably clear picture of what business wants from government. And since the group has operated for much of its history with little public attention or scrutiny, there is less of a concern that businesses were merely responding strategically to the preferences of the mass public. Lastly, because ALEC is not directly involved in electoral politics, it offers a useful window into avenues of business influence that do not revolve around elections or campaign giving.

In my research, I set out to test four existing theories of business power to explain why some legislators were more likely to introduce and enact ALEC bills. First, I considered legislators’ ideologies. Given the conservative, pro-business orientation of ALEC, I expected that its model bills would appeal most strongly to conservative legislators. I also hypothesized that legislators’ perceived constituencies would matter, too; in particular, whether they felt that they were representing businesses, rather than labor unions. Thirdly, I included measures of the prevailing economic conditions across the states, given that past scholars have hypothesized that business might be empowered by changes in the macroeconomy. Finally, I tested whether ALEC was more successful in states whose citizens viewed business more positively.

Aside from these existing explanations, I also developed my own theory of business influence across the states, centered on the notion of policy capacity. The American states vary dramatically in the resources they offer to their legislators to develop policy. In recent years, for instance, 16 states had legislators that reported spending only about half of their time working in the legislature, were paid barely $20,000 per year, and had very little legislative staff support, on average. Given that ALEC not only provides model bill ideas, but also offers research assistance and help building political coalitions to pass its model bills, its services should be especially valuable to understaffed and inexperienced legislators. Thus states with part-time legislatures and little staff support should be more likely to enact ALEC bills.

Examining ALEC enactments across the states in 1995, I found strong support for the role of ideology, perceived constituencies, and policy resources. I found that states with more conservative legislators, as well as states where a greater proportion of lawmakers viewed business (as opposed to labor) as a key constituency, were all more likely to enact ALEC model bills. But policy capacity mattered, too. States that spent less money on their legislatures, as well as states where legislators reported spending less time working on policy, were both much more likely to enact ALEC bills compared to states that spent more on legislative resources, and where legislators spent more of their time researching and writing legislation.

One concern with the cross-state analysis is that there are features of state governments that I might be excluding. With only one year of data, it is hard to fully account for such factors. To address this concern, I include another analysis in my research that examines the individual legislators responsible for authoring ALEC model bills in their respective legislatures in 1995. This analysis focuses on lawmakers in ten states for which data was available: California, Delaware, North Carolina, South Carolina, Texas, Utah, Vermont, Washington, and Wisconsin. Switching to individual legislators means that I can look at variation in the propensity of legislators to turn to ALEC bills within states, holding state-level characteristics constant. Performing this individual-level analysis, I found that ideology and partisanship mattered – more ideologically conservative legislators, as well as Republicans were more likely to rely on ALEC models – but so too did policy capacity. More junior and less experienced legislators were substantially more likely to turn to ALEC’s model bills compared to their more senior and experienced counterparts. 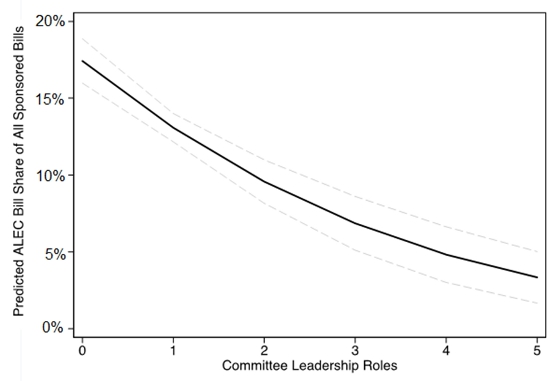 Notes: Analysis of legislators’ reliance on ALEC model bills in 1995 in ten states (see text). Figure shows predictions from regression model with sponsored ALEC model bills as a share of all sponsored bills as outcome; explanatory variables include legislator partisanship, ideology, number of policy committee leadership roles, and state fixed effects. All variables except for committee leadership roles held at their observed values.

What broader lessons can we take away from this analysis of ALEC’s activities? Perhaps the most important conclusion from my work is that weak policy capacity may empower businesses in the policymaking process. Where lawmakers lack sufficient resources to develop legislation on their own, businesses can have great policy success by fostering long term relationships with those legislators to provide such policy resources. Importantly, this source of business power appears to be entirely separate from electoral activities or campaign contributions. Thus, in the absence of a direct left-wing counterpart to ALEC (but see recent efforts like this one), weak state legislative capacity appears to favor organized business. There is a deep irony to this finding: proponents of so-called “citizen legislatures”, where lawmakers serve only part-time and have only minimal resources to develop policy, often claim that such legislatures are closer to the interests of ordinary citizens. My research, however, suggests that it is precisely these citizen legislatures that are most responsive to organized national businesses through groups like ALEC.

This article is based on the paper ‘Who Passes Business’s “Model Bills”? Policy Capacity and Corporate Influence in U.S. State Politics’ published in Perspectives on Politics. An ungated version is available here.

Alexander Hertel-Fernandez – Harvard University
Alexander Hertel-Fernandez is a PhD candidate in government and social policy and a graduate fellow in inequality and social policy at Harvard. His research interests center on the interplay between organized interests, especially business, and public policy in the American political economy. His dissertation, “Corporate Interests and Conservative Mobilization Across the U.S. States, 1973 to 2013,” examines the rise of national business groups in state politics since the 1970s. Other projects examine tax policy in the United States and other rich democracies, and the politics of unemployment insurance. More information can be found on his website, www.hertelfernandez.com. His email is ahertel@fas.harvard.edu.

October 1st, 2014|Alexander Hertel-Fernandez, Elections and party politics across the US, Justice and Domestic Affairs|0 Comments
Previous post Next post