The 2020 election year presented the Trump administration with a COVID-19 pandemic that it was ill-equipped to deal with, and ultimately intersected with the politics surrounding November’s presidential election. Peter Finn, Madison Imiola, and Rob Ledger argue the pandemic left Trump seemingly in denial about both the impact of the coronavirus crisis and the election’s outcome, with the former proving fatal for re-election in the latter.

As the COVID-19 pandemic advanced dramatically across much of the world in early 2020, the Trump administration, in common with so many governments, was thrown off course. The president moved through a number of responses: denial, urging calm, assuring the American public the situation was under control, and finally, restrictions and lockdown. The administration pursued similar policies to European countries, such as foreign travel restrictions and providing financial support to business and individuals, before coming under pressure to reopen the economy from the summer of 2020.

The polarisation inherent in US politics manifested itself in the debates about reopening in May 2020 after the initial shock of the pandemic had subsided. President Trump, and Republicans more broadly, were opposed to lockdowns and what they labelled affronts to ‘liberty‘, while Democrats were more cautious and wanted greater and prolonged federal economic support. Trump came into conflict with the head of the Centers for Disease Control and Prevention Anthony Fauci, scientists and evidence-based expertise more generally. Many in the GOP, and its supporters, maintained fundamentally hostile positions towards federal and state institutions.

As the November election approached, Trump seemingly used every opportunity to burnish his anti-establishment, norm-breaking credentials, just as a new and more deadly second wave gripped the country. As we document in a recent briefing paper, the Democrats held an understated mainly online convention in August. The GOP, meanwhile, also held online events, though the approach of the Trump administration was, perhaps, best summed up by events, including an appearance by the president himself at the White House on August 27, that showed noticeably less regard for social distancing. Likewise, when the president moved to replace Supreme Court Justice Ruth Bader Ginsburg, who died on September 18, with unprecedented haste, the White House held a nomination event on September 26 for now Associate Justice of the Supreme Court Amy Coney Barrett, which was later regarded as being a so-called ‘superspreader’ event.

Trump was among many Republican politicians and operatives who caught COVID-19 during September and early October, using his stay in Walter Reed National Military Medical Center to conduct a bizarre drive-by past supporters outside the hospital and apparently demonstrating the disease, which had by this point killed around 200,000 Americans, wasn’t so bad after all. Other norm-breaking included a horror show of a first presidential debate, replete with constant interruptions and rants, and then a cancellation of the second debate as Trump recovered from the virus.

At one stage the White House was calling for the election to be postponed because of the pandemic, though this never gained traction due to the constitutional obstacles such an approach faced. As Election Day neared, Trump and his allies laid the ground for a conspiratorial counter attack in case of possible defeat: electoral fraud. The pandemic had unsurprisingly accelerated many voters‘ desire to vote by mail, rather than in-person. Only in a deeply polarized country could an issue as seemingly benign as postal voting be so divisive. Reflecting elite cues, the fact that Democrats were more likely to choose postal voting and Republicans preferred in-person voting gave Trump his opportunity. Even before Election Day, the president started complaining that mail-in voting increased the likelihood of fraud, robbing him of what should surely be a landslide victory. 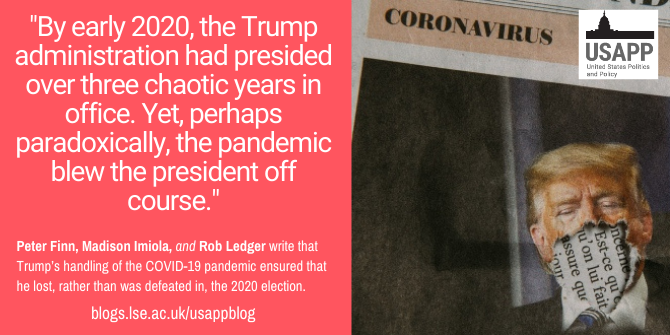 “Photo by Charles Deluvio on Unsplash“

The early results of the November 3 election did indeed look favorable for Trump, who took the lead in many of the key states. As several states only started counting mail-in ballots after polls had closed, the subsequent days saw a gradual erosion of Trump’s lead until Joe Biden emerged the clear winner by November 7, with 306 electoral college votes to 232. Although Biden’s win was confirmed by the Electoral College on December 14, Trump continued to build on his prior messaging to declare that the election had been subject to fraud, despite overwhelming evidence to the contrary. With the president increasingly unhinged, demanding state and federal officials discredit the results while also flirting with the far-right, this chain of events culminated with the assault on the Capitol on January 6.

By early 2020, the Trump administration had presided over three chaotic years in office. Yet, perhaps paradoxically, the pandemic blew the president off course. Although it wasn’t the case, there is good reason to think that if the final year of his term had resembled the others, Trump would have been reelected. The federal government’s inept response to the pandemic, however, along with the associated economic impact, were fatal to the president’s hopes of beating Joe Biden. Trump flailed haplessly for months in a vain attempt to get a handle on the virus, managing to polarize opinions on the pandemic and embrace ludicrous conspiracy theories. This method backfired and, judging by the eventual results, repelled more voters than it convinced. Biden’s steadier and more sober reputation and approach was crucial in persuading swing voters he would deal with the pandemic in a more cautious manner, by focusing on vaccinating the population and simultaneously rebuilding the country’s economy. President Trump’s approach to both the pandemic and the election itself appear to support an old adage in politics, which says that challengers do not win elections, incumbents lose them.