With the 2020 presidential primary now all but over, attention has now turned to who the Democratic nominee – former Vice President Joe Biden – will likely choose to be his running mate. While California Senator Kamala Harris currently tops many commentators’ lists of contenders, Garikai Chimuka suggests that Joe Biden’s past statement that he will appoint the first Black woman to the US Supreme Court likely means that he will not similarly choose a Black woman to be his Vice President.

Former Vice President Joe Biden effectively became the Democratic Presidential nominee in one of the most important elections in US and world history after Senator Bernie Sanders finally dropped in April. While the COVID-19 pandemic that is wrecking the world has put a backburner on what ordinarily be a full throttle campaign in the US, the important question of Biden’s Vice President is still finding space in major newspapers around the world. While there is little historic evidence that the choice of presidential a running mate can have a major impact on the election, this time it could well be different.

A bridge to the future?

Joe Biden is quite alive to this fact. That is why he has described himself more as a bridge to the future from Trumpism to a new normal before passing the baton to the next Democratic Party generation. While he will not say this explicitly to avoid being a lame duck from day one, it is entirely possible that in the event of his victory, he will be a one term president since he has referred to himself as a “transition candidate”. This makes his Vice Presidential (VP) choice the most important in history and with it a scrutiny like no other VP in the past.

Rankings of Biden’s potential running mates have taken up a great deal of space in the media. The Washington Post came out with a list of 11 contenders, CNN’s Chris Cilliza provided a list of 10, and Politico came out with its list of 12. A cursory analysis of these three lists show California Senator Kamala Harris ranked first. While these rankings should not be treated at face value since it might be an attempt by various interest groups like donors, the media and the various factions to develop narratives around their preferred candidates, what has been surprising is that Biden clearly nuanced words on his potential running mate have not been clearly dissected.

Is Joe Biden being ignored?

This is a strange question, isn’t it? How can a presidential candidate, former VP as experienced as Biden be ignored for a decision that is ultimately his and his alone to make? However, his early announcement of a woman running mate seems to have overshadowed what was clearly a nuanced but important qualification from Biden himself. Before saying that he would choose a woman vice President in the CNN debate, he prefaced it by promising to appoint “the first black woman” to the US Supreme Court.

However, the media may well be ignoring the implications of Biden’s statements on both the Vice Presidency and the Supreme Court. Although it is not impossible, given the rich mosaic of the Democratic Party, it is questionable that a Biden administration will have both a Black VP, and also in the very likely scenario of needing to appoint a Supreme Court judge, choose another Black woman – as he has stated he would do – for both of these important posts. This is because Biden has promised to appoint an administration that “looks like America”. This is also reinforced by media reports that one of Biden’s longtime friends and Democratic Party power broker, former Nevada Senator, Harry Reid, has encouraged him to appoint a Latina woman as VP. In fact, apart from the presidency, and VP for Joe Biden, the other most important office in the US today is that of a Supreme Court Justice. GOP Senate Leader Mitch McConnell’s blatant refusal to even consider the Merrick Garland appointment in President Obama’s final year and the ugly hyper partisan fight during the Brett Kavanaugh nomination hearings attests to this. In a Democratic Party that is increasingly concerned with identity politics, it will be difficult for Joe Biden to appoint an African American as both VP and as a Supreme Court Justice. 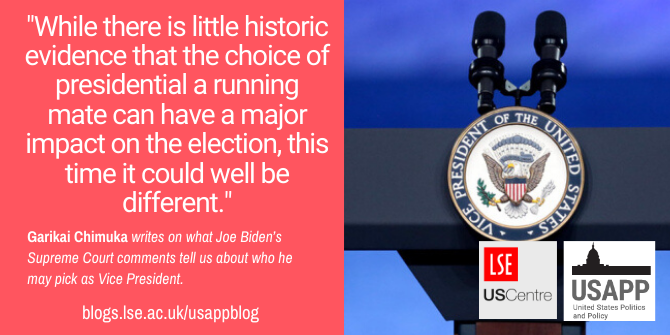 “Vice Presidential podium” by Gage Skidmore is licensed under CC BY SA 2.0

During the Democratic primary race, anything short of victory in South Carolina would have ended Biden’s campaign, but his win there in late February was a real Lazarus moment for the former Vice President. Many, including Biden, publicly hailed the role of Rep James Clyburn, an influential African American representative and the third ranking Democrat in the House. Clyburn has publicly lobbied for an African American to be on the ticket this fall, with the hope of creating another Obama coalition.

The need for a diverse ticket

People of color are increasingly playing a major role in the Democratic Party. As shown by Biden’s primary victory, it may be very difficult now for a candidate to win the Democratic nomination and indeed the presidency without the overwhelming turnout of reliably Democratic African Americans. Hence there was excitement at the beginning of the Democratic Party primary season with the diverse bench of candidates. However, by Iowa, businessman Andrew Yang was the only person of color still standing, creating some audible murmurings among the Democratic Party faithful. Hence some commentators believe that it is no longer feasible or even imaginable for a Democratic ticket to not be diverse. This might be the basis upon which Senator Harris is topping the Rankings.

Is the George Floyd killing a turning point?

A week is a long time in politics so goes the traditional saying of political pundits. This is why in the US they always talk about the “October Surprise”. This means that there can be an unseen event that can change the course of a presidential election. This is true even for the Vice Presidential nomination. Most pundits now believe that the killing of George Floyd has completely changed the VP permutations to make it almost impossible for Joe Biden not to choose an African American woman. This is supported by the fact that before the George Floyd murder, Senator Amy Klobuchar who ran a great campaign and also dropped out and endorsed Biden at a critical time on the eve of Super Tuesday together with Pete Buttigieg and was seen as plausible shoo-in for VP, dropped out of consideration and endorsed a woman of color for VP.

Complicating matters further for Biden is the widely criticized gaffe he made when he casually said any black person who votes for Trump instead of him “aint Black”. With racial justice now front and center of the campaign, it might also force Biden’s hand given that Trump and the Republican Party will attack Biden relentlessly on his role in the 1994 Crime Bill that is generally believed to have inadvertently led to mass incarceration of Black men. Trump will tout his Criminal Reform Bill, the First Step Act to contrast himself from Biden not necessarily to win the African American vote but to appeal to college educated white suburban women who are critical in swing states but abhor racism.

So who will be the VP nominee?

In the US, the simple rule for choosing the VP has always been one who is ready to be President. This is why VPs are usually Governors or Senators. The African American women being considered according to the press, include presumed front runner Senator Harris, former Georgia State House Representative, Stacey Abrams, former National Security Adviser, Susan Rice, Florida House of Representative and House Impeachment Manager Val Demings as well as Atlanta Mayor Keisha Lance Bottoms. Of the above, it seems that Senator Harris meets the traditional category of being either Senator or Governor. However, campaigns will also look at what she brings to the ticket electorally. For example, can she help flip a swing state? This might work against Senator Harris who hails from deep blue California – meaning that the race may still be for other qualified candidates who are not African-American.

The Supreme Court pre-emption by Biden ahead of his announcement that he would select a woman Vice President may have been a way to mollify African-American voters, and to prepare them for disappointment that while they might not get the silver, they will still get the bronze in form of a likely successor to Justice Ruth Bader Ginsburg. Joe Biden is much more likely to want Kamala Harris on the bench of the Supreme Court than in the West Wing. Therefore, it may be too early to rule out Michigan Governor Gretchen Whitmer who can put Michigan, a critical swing state into play. Senator Tammy Duckworth of Illinois also has an incredible CV having lost both legs in Iraq and is also Asian American. Other contenders may be Senator Tammy Baldwin who is white but also gay and hails from the critical swing State of Wisconson, and New Mexico’s first-term governor Michelle Lujan Grisham who is Latina.

If Biden chooses any of the above, he might go a step further, as he once hinted that he was thinking about “maybe announcing not the whole cabinet, but some,” before the election to give voters a better sense of how his administration would look. This could help mollify various factions of the Democratic Party.

There have been recent whisperings around former first lady Michelle Obama as a possible VP candidate with the only caveat being that she is not interested in politics. However, nothing can be ruled out in politics. It promises to be interesting days ahead indeed leading to the 1 August announcement of the most anticipated and consequential decision that Biden will make.

Garikai Chimuka
Garikai Chimuka holds an MSc from Wageningen University, the Netherlands. He also holds a Master of Laws as well as a Bachelor of Laws from the University of London. He is a Zimbabwean with research interests in global politics, intersection of law and technology as well as sustainable development issues in the Global South. He can be contacted at garychimuka06@yahoo.com