Recent years have seen increasing concern over the role of campaign finance in elections. But do stricter campaign finance regulations actually drive ‘fairer’ public policies? In new research that combines nearly three decades of state spending data on public welfare programs with an index of state campaign financing laws, Patrick Flavin finds that those states that more strictly regulate campaign finance devote greater parts of their budgets to public welfare, often in the form of cash assistance programs. He argues that by promoting a wider section of contributors, and not just the wealthy, campaign finance regulations “democratize” elections by encouraging candidates that are less beholden to moneyed interests, and have more flexibility to prioritize laws and policies that benefit disadvantaged citizens.

Soon after the November elections play out across the United States, those elected to office will get down to the business of crafting, debating, and implementing public policies. However, there is increasing concern among scholars and the general public that the preferences and interests of citizens with lower incomes receive relatively little consideration in government policy decisions compared to more affluent citizens. One common explanation for why the preferences and interests of citizens with lower incomes receive less attention in the policy decisions made by elected officials is that this group provides relatively few contributions (both in number and amount) to political campaigns. Laws that regulate the financing of campaigns have been enacted, in part, based on the belief that they can help to attenuate the link between money and political influence and produce more egalitarian policy outcomes.

Do jurisdictions with stricter campaign finance regulations actually represent citizens’ interests more equally? This question is difficult to answer at the federal level because one uniform set of policies governs races for federal offices. By comparison, there is great variation both across the fifty states and within them in terms of how much, or little, campaign finance regulation for state elected office occurs. For example, some states set no limit on the amount of money an individual can contribute to a candidate while other states have instituted a public financing system that allocates money to candidates who agree to abide by strict spending limits. Several states have even oscillated back and forth between fewer and more regulations over time. As Jeffrey Milyo at the University of Missouri observes, “in California, campaign contribution limits have been imposed, removed and imposed; Missouri has experienced two such cycles; and public financing has been passed and repealed in Massachusetts and Kentucky.”

Taking advantage of this rich variation both across states and across time, my research investigates the relationship between campaign finance laws and social welfare policy in the American states. To date, no study on the implications of campaign finance laws has focused specifically on redistributive policy outcomes such as public assistance spending despite evidence that these policies have the largest differences in public opinion between rich and poor, are critically important for the livelihood of low income citizens, and can help to reduce levels of poverty and economic inequality. In new research, I find that that laws that regulate the financing of political campaigns can play an important role in promoting the interests of disadvantaged citizens and enhancing political equality in the state policymaking process.

To measure states’ attention to disadvantaged citizens through social welfare policy, I use spending data from 1977 to 2008 and calculate the percentage of annual state spending devoted to public welfare in general and to cash assistance programs in particular. To measure the strictness of state campaign finance laws, I create an additive index of whether a state in a particular year has:

I then conduct a regression analysis that accounts for several alternative explanations for state social welfare spending including citizen and government liberalism, the percentage of seats in the lower house of the legislature controlled by Democrats, whether a state has a Democratic governor, the degree of competition between political parties, the state’s unemployment and union membership rate, and the percentage of a state’s residents who are African American and Hispanic. I also include state and year “fixed effects” which is a statistical technique for accounting for the fact that, for example, Minnesota and Texas are different in all sorts of ways, some of which we can measure but many of which we cannot.

My statistical analysis reveals that states that more strictly regulate the financing of campaigns devote a larger proportion of their budget each year to public welfare spending in general and to cash assistance programs in particular. As evidence that this finding is specific to public assistance spending, I demonstrate that there is no relationship between the strictness of campaign finance laws and spending decisions for non-redistributive policy areas including police protection, highways, parks and recreation, and sanitation. I also find that the impact of campaign finance laws on spending is substantively meaningful. For example, as illustrated in Figure 1, the effect of the campaign finance law additive index on welfare spending is larger than the effect for citizen liberalism and state unemployment rate and only slightly less than the effect of government liberalism. Simply stated, stricter regulation of the financing of political campaigns corresponds with a greater prioritization of social welfare spending above and beyond the effect of political, economic, and demographic factors. 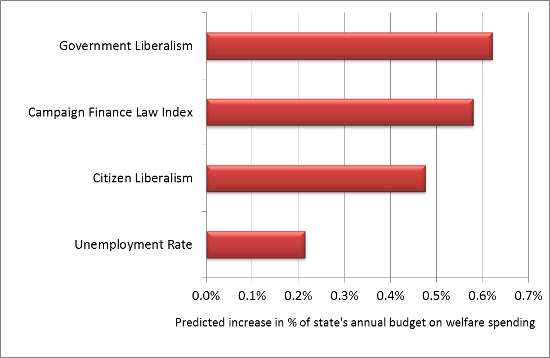 Note: Bars are the predicted effect of increasing the specified variable one standard deviation on the percentage of a state’s annual budget devoted to public welfare spending.

In addition, my research presents preliminary evidence that the causal mechanism linking stricter campaign finance laws and more generous public welfare spending is the fact that states with stricter laws tend to have a smaller proportion of campaign contributions that originate from business interests. In effect, campaign finance regulations “democratize” giving by promoting a wider cross-section of contributors as opposed to encouraging candidates to seek out large donations from business interests who tend to represent the opinions of wealthier citizens. This, in turn, means that candidates who get elected to office are less beholden to moneyed interests and instead have more flexibility to prioritize laws and policies that benefit disadvantaged citizens. For those interested in the potential impact of campaign finance laws on the real world of politics and campaigns, this is a fruitful avenue for future research.

This article is based on the paper, ‘Campaign Finance Laws, Policy Outcomes, and Political Equality in the American States’ in Political Research Quarterly.

October 30th, 2014|Elections and party politics across the US, Healthcare and public services, Patrick Flavin|0 Comments
Previous post Next post