On July 31, 2014, the Wisconsin Supreme Court upheld Republican Governor Scott Walker’s 2011 Budget Repair Bill that severely curtailed collective bargaining rights for the state’s public employees. While most of the debate in Wisconsin – and other states experiencing similar labor policy retrenchment – has focused on the economic consequences such as government spending and worker wages, the effects of collective bargaining laws on labor union political mobilization may be even more significant. Indeed, the fact that Walker’s legislation weakened bargaining rights for public employees whose unions have historically been strong supporters of the Democratic Party (e.g., teachers and state, county, and municipal employees) while leaving the state’s more Republican-friendly police and firefighter unions intact suggests that political elites are well aware that collective bargaining and other advantageous labor laws help subsidize the political mobilization operations of union interest groups. Just how instrumental have public sector collective bargaining laws been for union efforts to mobilize their supporters in politics?

To answer this question, we examined data on the political participation of public school teachers from 1956 to 2004. During this time period, 34 states adopted mandatory collective bargaining laws for teachers which allowed us to compare the political activity of teachers before and after their unions operated with the benefit of a public sector collective bargaining law. Substantively, we found that the effect of a teacher working in a mandatory bargaining law environment is greater than the effect of a teacher’s household income, education, and union membership status on her likelihood of participating in politics. We also identify increased contact from organized groups (i.e. teacher unions) seeking to mobilize teachers as a likely explanation for this finding. 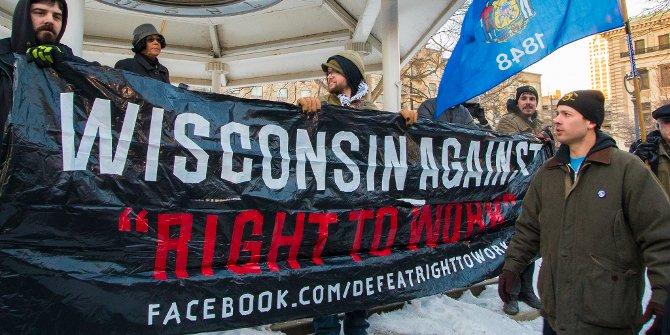 What specifically about collective bargaining laws helped catalyze political participation among teachers? The onset of collective bargaining in the public sector conferred an assortment of benefits (often formal and contractual) to teacher unions at the organizational level, benefits that in turn made it easier and less costly for unions to focus on recruiting rank-and-file employees to participate in politics. To mention just two small examples: it is quite common in mandatory bargaining law states to find contracts that guarantee teachers unions the equivalent of congressional franking privileges through unlimited use of the school district’s internal mail service. Moreover, many of these same contracts also subsidize the local union president’s salary so she can focus her efforts on union business. In other words, many school districts effectively pay for the equivalent of a full-time political activist for the head of the local teacher union interest group.

Our findings speak directly to the growing debate in the United States about the costs and benefits of public sector collective bargaining. Traditionally, unions have been relied upon as an antidote to upper-class bias in American politics, with many pointing to the decline of unions as a major factor in the growth of representational inequalities between the working class and economic elites. With the recent passage of laws in several states that curtail collective bargaining for public employees, it is likely that membership and the political influence of labor unions will decline even further.

On the other hand, critics of public employee unions argue that they are the ultimate special interest group – uniquely advantaged in the public policymaking process by being afforded “two bites at the apple.” That is, public sector unions are able to lobby elected officials at both the ballot box and the (collective) bargaining table. For those who believe public employee unions have widely contributed to the current fiscal crises (e.g., pension obligations) facing many state and local governments around the nation, our finding that these two bites at the apple (collective bargaining and political activism) work in concert with one another will likely confirm opponents’ convictions that the time to rein in government subsidies to public employee unions is long overdue.

Irrespective of how one views these findings from a normative perspective, however, they offer a useful reminder that the laws governments enact can have enduring and often unanticipated implications for interest group organization, citizens’ political participation, and, ultimately, the distribution of political power across society.

This article is based on the paper “When Government Subsidizes Its Own: Collective Bargaining Laws as Agents of Political Mobilization” in the American Journal of Political Science.