In March 2010, President Obama signed the Patient Protection and Affordable Care Act, which marked the most comprehensive reform of the American health care system since the Johnson Administration. This federal legislation makes the American states key political stakeholders for achieving major goals of the reform, one of which is to make health insurance coverage more inclusive and equal. Focusing on the state-level picture, Ling Zhu and Jennifer H. Clark examine how partisan politics produce far-reaching distributional consequences in health care. They show that inequality in health insurance coverage persists at the state level, especially in conservative states with diverse populations. 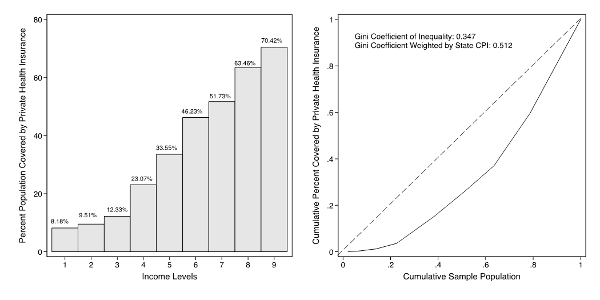 Note: Data are based on the U.S. Census Bureau 2008 Current Population Surveys 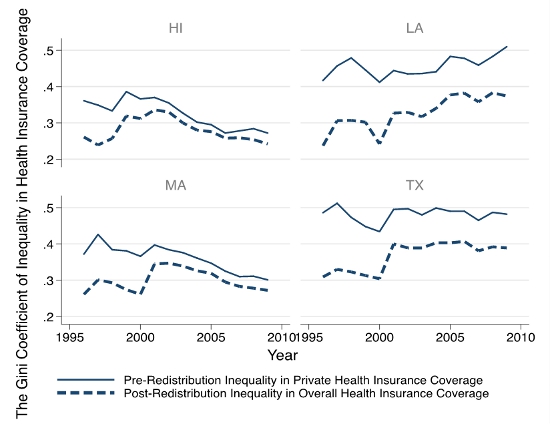 What explains the varying-level of inequality in health insurance coverage? Our research shows that state-level partisan politics have far-reaching distribution consequences in the health care domain, especially in states with diverse populations.

Partisan balance of state legislatures makes a difference. Our analysis of data on the fifty states in a 17-year time period suggests that there is a negative association between the proportion of Democratic legislators in state legislatures and inequality in both private and overall health insurance coverage. States with a large share of Democratic legislators, especially those with a Democratic supermajority, are more likely to have generous public health insurance programs; therefore, these states are able to include more low-income individuals in their public health insurance programs (e.g. Medicaid and SCHIP). We also find that private insurance markets are more regulated in Blue states than those in Red states, particularly regarding regulations and tax-incentives for encouraging small-business employers to provide insurance coverage to their employees.

At the state level, the provision of health care is largely a function of political institutions, labor-market bias, and racial diversity. How well the uneven distribution of health care coverage is addressed upon complete implementation of the Affordable Care Act is largely dependent on the 50 state governments. Given our finding of a central role of partisanship in the provision of health care insurance coverage, it is conceivable the specific kinds of reforms offered at the state level are critical to reducing disparities in health insurance coverage. The state’s role in implementing key provisions of the Affordable Care Act, such as the expansion of Medicaid and the creation and maintenance of state health insurance exchanges, will provide a unique opportunity to examine how different types of policies advanced by Democrats and Republicans influence health care outcomes and how this relationship differs in accordance with racial and ethnic diversity of the state.

This article is based on the paper, “Rights without Access: The Political Context of Inequality in Health Care Coverage in the U.S. States” in State Politics and Policy Quarterly.

Ling Zhu – University of Houston
Ling Zhu is an Assistant Professor of Political Science at the University of Houston. Her research interests include public management, health disparities, social equity in healthcare access, and the implementation of public health policies at the state and local level.