Like the media in general, the news is overwhelmingly dominated by men, both as correspondents and interview subjects. In new research, Gail Baitinger finds that surprisingly, the underrepresentation of women in the media is not driven by sexism. By analyzing each guest on five programs over three years, she finds that journalistic norms, not gender bias, helps determine who appears. She writes that, in an effort to show balance since 2009, high ranking party members opposite to President Obama who have more extreme voting records have been more common guests, and that most of these tend to be men.

A 2014 report by the Women’s Media Center found that women comprised only 35 percent of the reporters and correspondents on the network evening news in the United States. They represented just 37 percent of the bylines at the nation’s 10 most widely circulated newspapers. And men were quoted as sources three times more often than women on the front page of the New York Times.

Women’s minority presence in the news has been widely established by both women’s organizations and academic research, but its roots are not yet known. The conventional wisdom is that bias against women contributes to their under-representation in the media. For instance, a 2010 Politico story reports that press secretaries for female members of Congress believe that the Sunday morning programs “have a men-in-suits mind-set that leads to familiar faces appearing over and over – and vital women’s voices being muffled.” On their website, the women’s organization, Name It. Change It., writes, “Widespread sexism in the media is one of the top problems facing women.”

But my research suggests that this is not the case. Instead, I find that journalistic norms – such as the desire by the networks to generate balance and conflict in a story, or to interview the sources believed to possess political power and authority – are the key factors that affect the selection of guests. This doesn’t mean that women are not at a disadvantage, though. Quite the contrary. Women are less likely than men to possess the characteristics that correlate with appearing in the news.

How do I arrive at this conclusion? I recorded every guest who appeared on ABC’s This Week, CBS’s Face the Nation, Fox News Sunday, NBC’s Meet the Press, and CNN’s State of the Union for 36 months (January 2009 through December 2011). All told, this includes approximately 4,200 appearances of more than 1,000 individual guests, ranging from members of the administration to journalists to elected officials.

Consistent with previous research (but relying on a much larger data set), I confirm that women – regardless of whether they are appointed or elected officials, journalists, or political activists – are less likely than men to appear as guests. When accounting for repeated appearances, women comprise approximately one-quarter of the guests. This is true for all five shows; as Figure 1 shows, women’s representation never surpasses 30 percent on any of the programs. 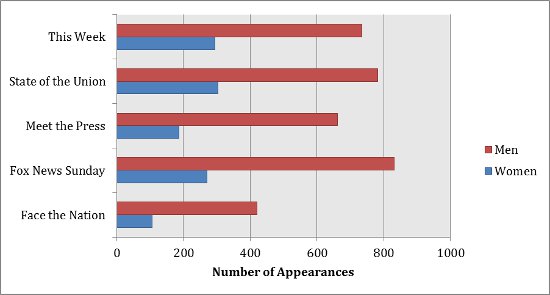 And this is the case for men and women across several professions. Whether elected officials, journalists, activists, or others, men always outnumber women, as Figure 2 below shows. 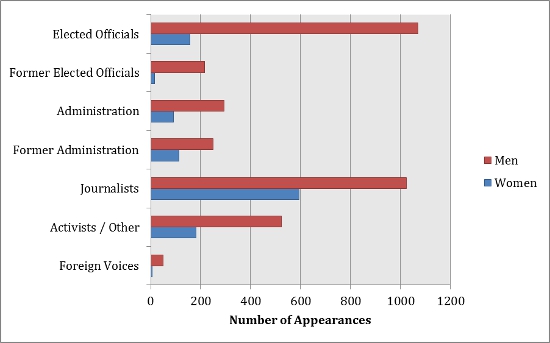 But once we look beyond the overall numbers, it becomes clear that journalistic norms, not gender bias, determine which political actors are perceived as valuable additions to the news. The most frequent guests on the shows are legislators with the highest levels of expertise and credibility – such as congressional leaders, senators, and members of prestigious committees. Members of the party opposite to that of the president also garner more attention, since these shows strive to create balance in the political debate and members of the out party do not receive the same amount of publicity for their message as the White House does. From 2009 – 2011, the Sunday shows brought on a disproportionate number of guests from the Republican Party to counter the Obama Administration. Finally, members of Congress with extremely partisan voting records – individuals who can generate conflict on the broadcasts – are also more likely to make repeated appearances on the Sunday programs.

Importantly, this does not mean that sex is irrelevant. Women in the pool of potential guests are less likely than men to have the attributes and experiences that correlate with appearing repeatedly on the shows. During the years of the study, women comprised only 16 percent of U.S. Senators, held just 15 percent of the leadership positions in Congress, and occupied only 16 percent of the seats on prestige committees. In addition, 90 percent of the GOP conference were men. If high-ranking Republicans are especially attractive as guests, then women are especially challenged. And female legislators are less likely than their male counterparts to have the extreme voting records that allow them to produce contentious back-and-forth debates on the shows.

Overt sexism in guest selection appears not to be the culprit for women’s under-representation in the media. Long-held reporting norms to produce the most newsworthy story have the biggest impact on source selection. But women’s relative absence from influential political positions and their lack of attributes considered newsworthy also means that these norms perpetuate a gendered news environment.

Particularly problematic is that prospects for gender balance in the future remain bleak. The key to increasing women’s representation on the Sunday shows, after all, seems to be increasing the number of women who enter the political arena as elected officials, journalists, activists, and members of the administration. Yet Jennifer L. Lawless and Richard L. Fox find that women are less politically ambitious than men, and there is nothing to suggest that the gender gap in political ambition will decrease among future generations. In addition, Lawless and Sean Theriault find that female lawmakers retire from Congress earlier than men do. So, fewer women serve in office long enough to take on the leadership roles and gain the expertise and notoriety that makes them first-rate additions to the Sunday discussions.

The gender gaps in political ambition and tenure in office means that substantial gains among women as newsmakers are likely years away.

This article is based on the paper ‘Meet the Press or Meet the Men? Examining Women’s Presence in American News Media’ in Political Research Quarterly.