Why has the U.S. economy been so sluggish to return to growth in the aftermath of the Great Recession of the late 2000s? In new research, Barry Z. Cynamon and Steven M. Fazzari find that the current level of household demand is more than 17 percent lower than its pre-recession trend, preventing a stronger recovery. They argue that in the lead up to the Great Recession, households compensated for rising inequality and stagnant wages by borrowing more, something that became unsustainable when the financial crisis hit. For the U.S. to achieve robust growth rates once again, the gap in demand that opened with the collapse of household spending in the Great Recession will have to be closed, preferably through wage growth across the board.

In announcing his run for the US presidency last month, Jeb Bush has set an ambitious goal of 4 percent real GDP growth for the US economy. This goal has been greeted with substantial skepticism from parts of the economics establishment, while some economists have praised it as a “worthy and viable aspiration” that could be achieved with growth-oriented policies (see the op-ed by Glenn Hubbard and Kevin Warsh, for example). Our recent research implies that a 4 percent growth goal for first term of the next president is not only possible, but is what we should strive to achieve.  Like Hubbard and Warsh, we agree that the US needs policies that raise labor force participation, accelerate productivity growth, and improve expectations. Where we part ways is the tactics. Their recommendations focus on supply-side policies, such as tax reform, regulatory reform, reduced trade friction, and education and training. Our research implies that a weak demand side explains the sluggish recovery from the Great Recession, with the rise of income inequality as a central factor. Consequently, our policy prescriptions revolve around increasing the take-home pay of the majority of American households.

The Great Recession, which began in December of 2007, was the most severe American economic downturn in three quarters of a century. Most economists did not anticipate ahead of time that this kind of thing could happen, although we warned that “it could get ugly out there” in October of 2007. But as the severity of the recession became apparent in the dark days of late 2008 and early 2009, many economists predicted a swift bounce back, reasoning from historical evidence that deep downturns are followed by rapid recoveries. Sadly, that prediction was also incorrect. The growth path following the Great Recession has been historically sluggish. Our recent research, supported by the Institute for New Economic Thinking, helps explain why: the economic drag from decades of rising income inequality has held back consumer spending.

Our work studies the link between rising income inequality and US household demand over the past several decades. From the middle 1980s until the middle 2000s, American consumers spent liberally despite the fact that income growth stagnated for most of the population. We show that the annual growth rate of household income slowed markedly in 1980 for the bottom 95 percent of the income distribution while income growth for the top 5 percent accelerated at the same time. The result was the widely discussed rise of income inequality. It is also well known that household debt grew rapidly during this period. Our work points out that the build up of debt relative to income was concentrated in the bottom 95 percent of the income distribution. Debt to income for the top 5 percent bounced around with little clear trend: 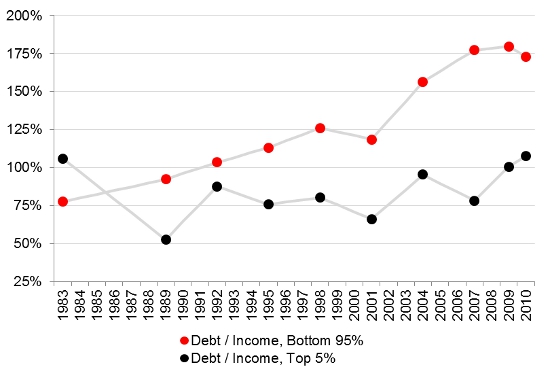 When the financial crisis hit, our work shows that the bottom 95 percent of Americans could no longer get the rising debt they needed to continue to spend along the trend they established in the years leading up to the crisis. The result was a sharp cutback in household demand relative to income that caused the collapse of the Great Recession, shown by the arrow in Figure 2: 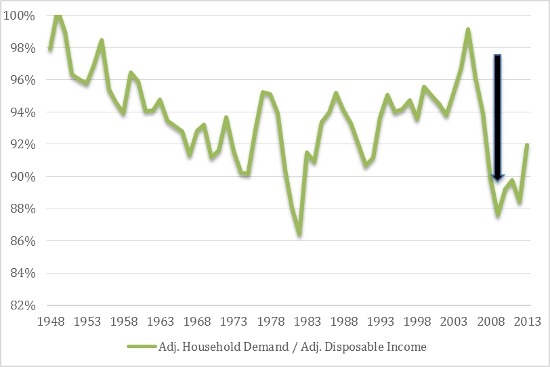 What about the recovery? Figure 3 shows the path of our measure of real household demand and compares it to the trend it followed from the peak of the business cycle that ended in 2000 to its peak in 2006 prior to the Great Recession: 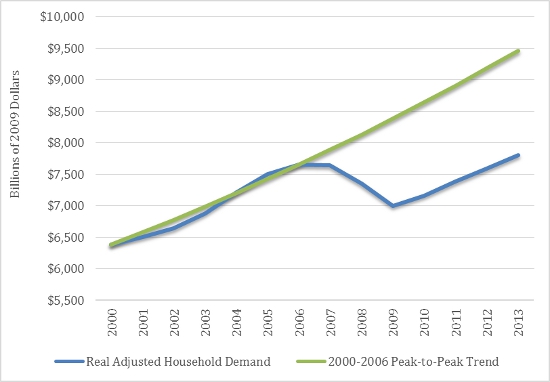 Source: Authors’ Calculations, from “Rising Inequality, Demand, and Growth in the US Economy,” forthcoming in the European Journal of Economics and Economic Policy, 2015. Working paper version available here.

Household demand in 2013 (the most recent observation we have because our computations incorporate data that are released with a lag and are available at an annual frequency only) was a stunning 17.5 percent below its pre-recession trend with no sign of recovering back towards the trend.

What happened? Our research implies that the cutoff of credit for the group of households falling behind as income inequality rose prevented their spending from recovering to its pre-recession path. While there is no reason to necessarily expect that consumer spending will follow a constant trend over long periods of time, the practical reality is that the US economy needed the pre-recession trend of demand to maintain adequate growth and at least a rough approximation to full employment prior to 2007.

In the middle 2000s, there was no sign of excess demand in the US economy. Inflation was tame and interest rates low. Wage growth was stagnant. Although some gradual slowing in long-term US growth might have been predicted as the large baby-boom generation ages, the overall labor force participation rate was actually rising prior to the recession, so there was no reason to expect any significant decline in labor resources in the years immediately following 2007. Yes, the way many Americans were financing their demand was unsustainable, but there is no indication that business could not sustainably continue to produce along the pre-recession trend if they had been able to sell the output.

Our interpretation of the evidence is that the demand drag that could be expected as the result of rising inequality is, after a delay of a quarter century, finally constraining the US economy. Intuition, theory, and evidence predict that high-income people spend, on average, a smaller share of their income than everyone else. So as a higher share of income goes into the pockets of the well-to-do, the household sector as a whole is likely to recycle less of its income back into spending, which slows the path of demand growth. A possible problem with this prediction for the US in recent years is that income inequality began to rise in the early 1980s, but household demand remained strong through 2006. Our argument is that the demand drag from rising inequality was postponed by the build up of debt: the bottom 95 percent borrowed rather than cut back their spending when their income growth slowed. But as the crisis hit, lending to households collapsed, and the trend of rising debt could not continue. The effect of rising inequality has come home to roost, hitting the economy hard.

As a result, today’s economy is underperforming. No one can know precisely how much of the stagnation in household demand is due to the rise of inequality, but our estimates imply that the current path of total demand in the economy is at least 10 percent below where it would have been with the income distribution of the early 1980s. Where demand goes, so follows output and employment.

This analysis links to the call for 4 percent growth. Considering conventional estimates of the long-term trend growth of the economy, a 4 percent growth rate through the first term of the next US president would go a long way toward closing the gap in output that opened with the collapse of household spending in the Great Recession and has yet to be filled.

How can we move toward this goal? Our research strongly implies that the main problem is on the demand side, not the supply side. The US needs to find a way to boost demand growth by arresting, and hopefully reversing, the dramatic rise of inequality.

The basic argument is exceedingly simple: the economy continues to be held back by insufficient household spending and if the income share of Americans outside of the top sliver rises, household spending will increase. Policies that raise the minimum wage and reduce the tax burden of low and middle income households would help. In our view, however, the best method to achieve this objective would be to restore wage growth across the income distribution as occurred in the decades after World War 2. Meeting this objective is challenging for a variety of reasons, including the fact that there remains no clear consensus about what has caused the rise of American economic inequality. But the need to address inequality is not just a matter of social justice, it also is important to get the economy back on the right track after more than 7 years of stagnation. We can do better.

This article is based on the paper, “Inequality the Great Recession and Slow Recovery,” in the Cambridge Journal of Economics, 2015. For further reading and details about the research behind this post please see:

Barry Z. Cynamon – Federal Reserve Bank of St. Louis
Barry Z. Cynamon is a visiting scholar at the Center for Household Financial Stability at the Federal Reserve Bank of St. Louis. His research focuses on the intersection between household finance, including balance sheet health and the distribution of income, and economic growth. Recent efforts supported by the Institute for New Economic Thinking have included contributions to the measurement of consumption across the US income distribution and alignment of the US national accounts to match household survey data.

Steven M. Fazzari – Washington University in St. Louis
Steven Fazzari is a professor of economics at Washington University in St. Louis.  His research explores two main areas:  the link between macroeconomic activity and finance, particularly the financial determinants of investment spending, and the foundations of Keynesian macroeconomics.  His perspectives on the causes and consequences of the Great Recession, the macroeconomic effects of rising income inequality, financial instability, deficit reduction, and capital gains taxation have been highlighted in the national and international press.