Why do some states elect two Senators from different parties?  Don’t blame it on strategic voters.

Why do some states elect two Senators from different parties?  Don’t blame it on strategic voters.

Among America’s elected branches, the United States Senate has the unique feature of having two members represent each state.  Because the same set of voters choose each Senator, we might expect that the overwhelming majority of states would elect two Senators from the same party.  Yet split-party Senate delegations—same-state Senate duos made up of one Democrat and one Republican—have been quite common throughout history.  Why?  Some scholars argue that split delegations occur because voters want to “balance” their state’s overall Senate representation.  Chris Donnelly finds little support for such a theory, and suggests that those seeking to explain divided Senate delegations ought to move beyond the notion that voters are strategically choosing such an arrangement.

Why might a state elect two senators from different parties?  In his 1992 book, Dvided Government, political scientist Morris Fiorina suggests that split-party Senate delegations might arise from “balancing,” whereby voters seek to bring the average ideological preferences of their state’s two senators closer to the middle of the political spectrum and, as a result, might choose the U.S. Senate contender to whom they are less ideologically proximate.

From the voter’s standpoint, Senate elections can produce three possible outcomes: two Democrats, two Republicans, or one of each.  But the voter can never express a preference among all three outcomes because in any given election, one senator is not running.  Thus, the voters have a choice only between two senators of the same party as the senator who is not running, or of one senator from each party.  …In an ordinary spatial model of a two-candidate election, the voters simply vote for the candidate closer to them.  …But in a Senate election, the voters may very well care about the total representation of their state in the Senate.  …If voters care about the total representation of their state, they may very well vote for candidates who are farther from them than their opponents.  (81-82) (emphasis added)

Figure 1 below provides an illustrative example of this logic.  In this hypothetical Senate election, we have a Democratic Senate candidate, shown by xD, who is located at -2 on the [-3, 3] left-right interval, with -3 being far-left and 3 being far-right.  We also have a Republican Senate candidate, shown by xR, who is located at 2 on the same left-right interval.  If voters simply choose the candidate closest to them, then the dividing line—or, more technically, the “cutpoint”—is located at 0; everybody to the left of 0 will vote for the Democrat and everybody to the right of 0 will vote for the Republican. 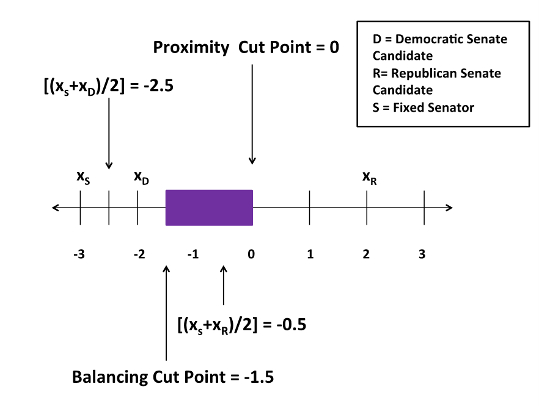 If our goal is to determine whether voters prefer the closer candidate (as proximity theory would suggest) or the closer delegation (as balancing theory would suggest), however, we run into a problem: Most voters are going to vote for the same candidate regardless of whether they are choosing the most proximate candidate or the most proximate delegation.  A voter with preferences well to the left of center will vote Democratic, regardless of whether they behave in line with balancing or proximity theory; similarly, a voter with preferences that are well to the right of center will vote Republican no matter what.  The only voters who get different predictions under each of the two theories are those who are located between the proximity cutpoint and the balancing cutpoint—in the Figure 1 example, these are voters located between -1.5 and 0, the region which is bracketed by the purple shading.  In our example, any voter between -1.5 and 0 will vote for the Democrat if they are choosing the closest candidate but will vote for the Republican if they are choosing the closest Senate delegation.  Seeing how these individuals—who we can think of as “cross-pressured” voters—behave will allow us to gauge how much support there is for balancing, as opposed to proximity voting.

Thankfully, data from the Congressional Cooperative Election Studies (CCES), available for the 2006, 2008, 2010, and 2012 U.S. election cycles, asks individuals all of the things we would need to know in order to determine how they would vote under the proximity model as opposed to the balancing model.  To explain, CCES respondents are asked to identify where they themselves stand on a left-right scale, where they perceive both of their state’s major-party U.S. Senate candidates to stand on the same left-right scale, as well as where they perceive each of their two U.S. Senators (thus including the Senator who is not up for re-election) to be located on the left-right ideological continuum.  So for each voter, we have all of the information necessary for predicting how he or she would vote under each theory.  This of course also means we can cleanly identify voters for whom proximity theory and balancing theory produce different predictions. 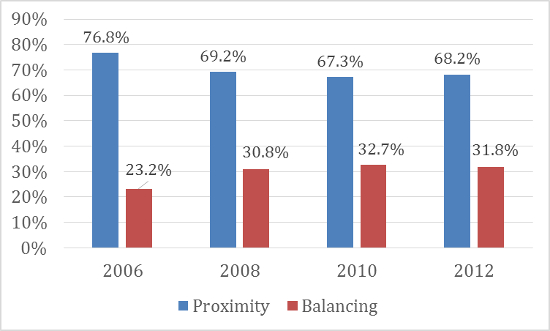 I also conduct multivariate analysis that looks at the vote choice of those who get different predictions under balancing and proximity theory.  When I control for individual-level factors that are well-known to affect vote choice, such as an individual’s race, party identification and income, along with election-level variables such as incumbency and candidate quality, I find that even above and beyond these important factors, an individual’s proximity to one candidate over another is a highly influential determinant of how he or she ultimately votes, while the effect of an individual’s proximity to one Senate delegation over another is not statistically distinguishable from zero.  In other words, the strong evidence in Figure 2 that the candidate to whom a voter is closest trumps the Senate delegation to which the voter is closest is confirmed by my multivariate analysis, which I encourage interested readers to examine in the full-text version of my article.

In sum, split-party Senate delegations present an interesting puzzle for students of American elections and representation; my research rules out one explanation for such opposite-party Senate pairs: strategic, purposive behavior on the part of voters.  If the phenomenon of states electing one Democratic Senator and one Republican Senator largely arises from proximity voting, as my results suggest, then it is likely the case that in such states, one or more of the following is occurring: the composition of state electorates are changing from one election cycle to the next; state electorates are remaining relatively stable in their membership but the preferences of at least some of the individuals comprising the electorate shift from one election cycle to the next; or the left-right stance of Senate candidates fielded by the major parties changes from more extreme to less extreme from one cycle to the next.

Thus, research that has identified challenger quality, heterogeneous electorates (here, here, here, and here) and candidate-centered politics, among other factors, as strong explanations for why some states elect opposite-party pairs of Senators, seems suggestively supported by my findings.  Future work should further unpack the multitude of survey data available to scholars of elections to explore these explanations that might resolve the seeming paradox that split-party Senate delegations are largely the result of proximity voting yet, by definition, entail one party’s candidate winning one election and the other party’s candidate winning the next.

This article is based on the paper, ‘Balancing act? Testing a theory of split-party U.S. Senate delegations’, in Electoral Studies.

Christopher P. Donnelly – University of California, Davis
Christopher P. Donnelly is currently a fifth-year PhD Candidate in the Department of Political Science at the University of California, Davis; he expects to receive his doctorate in June 2016.  His research is focused primarily on American representation, with a particular emphasis on the various shortcuts and decision rules that citizens might use to evaluate candidates for office or elected officials.  To learn more about Chris, please visit www.christopherpdonnelly.com.