The top three candidates in the US Democratic Presidential Primary race are all 70 or older. Dan Cassino looks at whether age is a factor in people’s support for candidates. Using survey data, he finds that across all age groups, respondents tended to prefer younger candidates to older ones, and that those between 40 and 50 were especially favored compared to those in their 30s and 70s.

President Donald Trump would be 74 on Election Day 2020. Vermont Senator Bernie Sanders, would be 79. Former Vice-President Joe Biden would be 77, and Massachusetts Senator Elizabeth Warren would be 71. The oldest person ever elected to the Presidency, Ronald Reagan, was 73 when he was sworn in for his second term. At this point, it is more likely than not that the next President will be the oldest ever to take the oath of office: while Trump’s election would indicate that Republican voters aren’t too concerned about a candidate’s age, but will this be a factor for Democratic Primary voters? The evidence seems to be that for them, a candidate’s age does matter, but not as much as you might think.

There may be good reason to take the age of candidates into account: Sanders recently suffered a heart attack while on the campaign trail. It has been argued that Reagan showed some signs of Alzheimer’s disease during his second term in office. Even aside from health-related concerns, CBS newsman John Dickerson has commented that age and the experience it brings may well make it harder for someone to adapt successfully to a new role, like the Presidency.

However, it’s difficult to assess the impact of candidate age on their support from everyday polls. Is Sanders, or Warren, or Biden, doing worse than they otherwise would be because of concerns about age? It’s not clear what we should be comparing them to. Questions asking if a candidate is “too old,” or if age is a concern, don’t work either. Voters enthusiastic about Sanders are hardly likely to say that he’s too old for the job, while supporters of younger candidates may well do so. As such, they’re telling us less about the effects of candidates age than about the rationalizations voters come to in supporting or opposing candidates.

To try and separate the effects of candidate traits, like age, from voters’ views about the candidates, researchers make use of an analysis technique where respondents are shown two randomly selected set of traits and asked to choose which of them they would prefer. So, one side might be a 40-year-old African-American female candidate with certain views on abortion and healthcare; the other side might be a 65-year-old white male candidate with other views on the same issues. 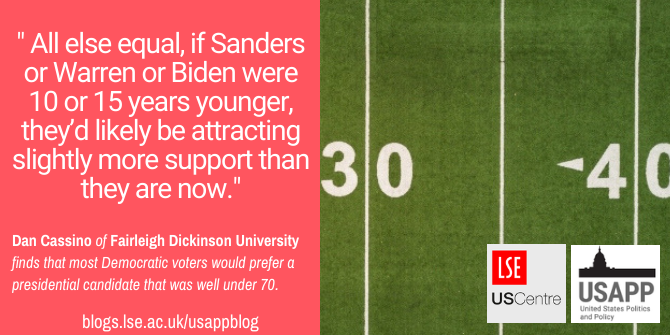 Photo by Martin Reisch on Unsplash

In a Data for Progress (a liberal leaning issue advocacy group) survey from just after the first debate, likely voters in the Democratic primary were presented with 5 of these match-ups, and, after each, were asked which they would prefer, and how motivated they would be to vote for the “candidates” in a general election match-up with Trump. Because these traits are divorced from any actual candidate, they function as a better test of the effect of individual traits on support.

Generally, voters preferred younger candidates to older ones, though not by a big margin: respondents chose the younger candidate over the older candidate 54 percent of the time. But we can get a more nuanced look at the effect of age on evaluations by looking at the motivation measure: how excited respondents are to support a particular candidate.

In general, respondents were excited to vote for any of the candidates over Trump – as would be expected in a poll of Democratic primary voters. Overall, they gave the candidates an average score of a little above 7 on the 0-10 scale. But this score did vary significantly based on the age of the candidate.

Figure 1 – Enthusiasm by age of Candidate 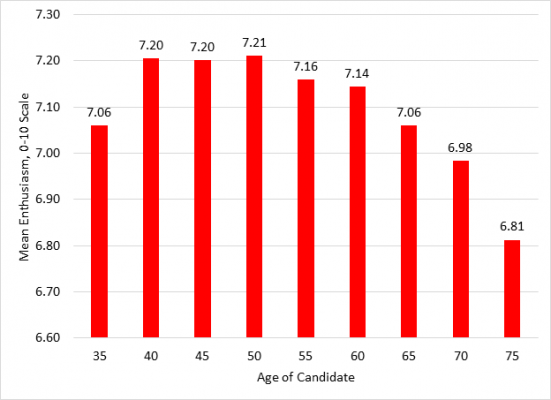 This pattern holds up when we control for the age of the respondent. Older Democrats are more motivated to support any of the candidates, and younger Democrats, are, on average, less enthusiastic about them, but all show the same basic pattern based on candidate age.

Figure 2 – Motivation to support, by Age of Respondent & Age of Candidate 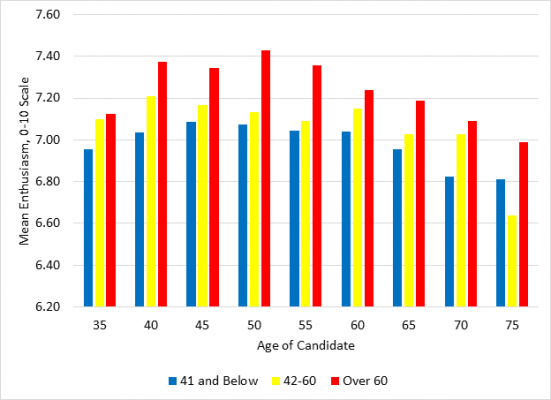 So, are voters penalizing older candidates? They certainly seem to be. All else equal, if Sanders or Warren or Biden were 10 or 15 years younger, they’d likely be attracting slightly more support than they are now. But those years in office, and in the public eye, also give them an advantage in accomplishments and name recognition that may well make up for it.