Homicide rates of police officers are much more associated with gun ownership than violent crime.

Homicide rates of police officers are much more associated with gun ownership than violent crime.

More than 90 percent of the homicides of police officers in the US are committed with guns. In new research, David Swedler looks at the relationship between police officer homicides and a number of state-level variables. He finds that gun ownership in a state is the most significantly associated with officer homicides, much more so than violent crime. He writes that policymakers and politicians who wish to protect police officers should reconsider the strength of their state’s gun laws.

Compared to similar countries the United States has a very high homicide rate, which has been directly linked to gun ownership. Gun ownership at the state-level is associated with homicide rates for the general population as well as specific types of homicide, e.g. stranger homicide, domestic violence homicide. Since over 90 percent of homicides of police officers in the US are committed with firearms, we wanted to know if homicide rates of officers were associated with firearm ownership at the state-level as well. In recent research, we find that officers in states with higher gun ownership were at greater risk of being murdered on the job than officers working in states with fewer guns.

Measures of homicide rates of officers and firearm ownership

Officer homicides were collected from the FBI’s annual Law Enforcement Officers Killed and Assaulted report, part of the FBI’s Uniform Crime Reporting program. This gave us details on every homicide of officers from 1996 – 2010. To calculate the homicide rates, we used a different FBI database that allowed us to count the numbers of officers working in each state over the course of the study. There were 782 homicides of officers over approximate 12 million officer-years. State homicide rates ranged from 0 (Iowa, Maine, Vermont, and Wyoming) to 4.2 per 10,000 officer-years (Alaska). While California and Texas were the only states to have at least officer homicide in each year of the study, their high totals of officers put their rates towards the mean, 0.58 and 0.78 per 10,000, respectively. 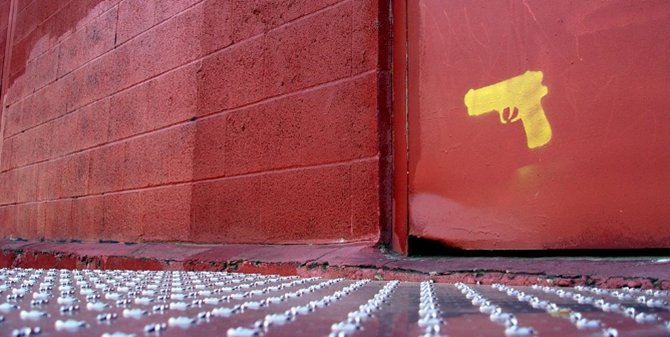 Since no catalog of gun ownership exists in the US, we had to use the best-available measures of household gun ownership at the state level. Two measures from separate Centers for Disease Control and Prevention (CDC) databases have been often used to estimate household firearm ownership at the state level. First, the Behavioral Risk Factor Surveillance System (BRFSS) is an annual questionnaire that examines national trends in behavioral health risks. In 2000, 2001, and 2004 the BRFSS asked whether or not a firearm was present in the home for the respondents. The question did not specify the legality or type of the firearm, nor the number of firearms in the house. The second measure of firearm ownership from the Web-based Injury Statistics Query and Reporting System (WISQARS) database is the percentage of suicides in a state committed using a firearm, referred to as firearm suicides over suicides or FS/S. While the second measure varies more for smaller states versus larger states, it gives annual estimates of firearm ownership. Using the BRFSS estimate of firearm ownership, we estimated that 38 percent of homes in the US had firearms during the study period with a range of 5 percent (District of Columbia) to 62 percent (Wyoming). The WISQARS and BRFSS estimates of firearm ownership were highly correlated. That we were able to show that two independent measures of firearm ownership give us confidence in the content validity of our estimates.

As we formulated our study, we considered an alternative hypothesis as to what could be driving homicides of officers. Criminal opportunity theory suggests that crimes are carried out by sufficiently-motivated actors who have the appropriate opportunity to commit such a crime. By assessing the violent crime rate, we asked whether it could be the case that officers were being killed because they were more frequently encountering violent criminals and violent crimes. Therefore we included state violent crime rates as an independent variable in our analyses.

Since no state-level analyses had been conducted on homicides of officers, we had little guidance as to which variables would be most important for our regression analyses. So we used a series of studies by Siegel and colleagues on state-level homicide rates as our starting point. We didn’t want to overwhelm our model with too many variables for a main analysis that only had 51 cases. By using a variable selection process, we ended up with four additional covariates in our model in addition to the with firearm ownership and violent crime rate variable: percentage of the population age 15 – 29; percentage of the population that is African American; median household income, in $10,000s of 2012 dollars; and divorce rate.

We performed multiple sensitivity analyses to verify our findings. Three of four cross-sectional sensitivity analyses produced nearly identical incident rate ratios with the fourth finding that firearm ownership was not related to homicide rates of officers per million of state population. We also conducted a multilevel longitudinal analysis that divided the study into three 5-year time blocks. Rather than use data from each state over the 15 years, the five year blocks are a trade-off that allows us to examine more cases while not letting the high year-to-year variance of the smaller states invalidate our estimates of firearm ownership. This longitudinal analysis confirmed the findings for the relationship between firearm ownership and homicide rates of police officers.

Another important benefit of the longitudinal analysis is to confirm that gun ownership and homicide rates of police officers did not experience reverse causality. For example, if a state had experienced a flurry of officer homicides early in the study period then gun sales for personal protection went up, we wouldn’t have seen the relationship persist over time. This is consistent with the literature, where we could find no prior studies that indicated homicides of police officers lead to increasing gun purchases. Therefore, having found that violent crime rates and reverse causality are not to blame, we concluded that increased gun ownership is leading to increased homicides of officers when considered at the state level.

We recommend that people who are interested in protecting the lives of police officers in their states to consider the strength of the current guns laws there. We are not advocating for any particular policy in a given state, because we did not examine the effects of exact firearm legislation on homicide rates of officers. Changing laws regarding firearm ownership can affect gun deaths within states in the general population. Our results indicate that amending gun laws could also be a way to reduce the murders of law enforcement officers.

This article is based on the paper, ‘Firearm Prevalence and Homicides of Law Enforcement Officers in the United States’, in American Journal of Public Health.

David Swedler – University of Illinois
David Swedler, PhD, MPH, is a research assistant professor in Environmental and Occupational Health Sciences at the University of Illinois at Chicago School of Public Health. His research focuses on the epidemiology of workplace injuries in the United States. Other recent work of his has considered how distracted driving affects truck drivers and the role of worksite safety climate in preventing slips in fast food restaurant workers. Photo credit: Roberta Dupuis-Devlin/UIC Photo Services.