Bank panics show how if one firm breaks its customers’ trust, suspicion can fall on similar organizations

Bank panics show how if one firm breaks its customers’ trust, suspicion can fall on similar organizations

Most firms live and die by their public reputations. But how much control do firms have over how they are seen, when they are tarred with the same brush as a similar organization in crisis? Using the bank panic of 1893 as a case study, Henrich R. Greve, Ji-Yub (Jay) Kim and Daphne Teh find that customer panics are more likely to spread among more homogenous communities, when customers associate the firm in crisis with other similar firms, and when they see such firms as being linked. They write that organizations can protect themselves from falling victim to a run of customer panic by differentiating themselves from their competitors.

In 2011 depositors of two banks in Latvia, Swedbank and SEB, rushed to empty their bank accounts after a rumor spread on Twitter claiming that the banks were experiencing financial trouble. The bank quickly addressed the rumors as false and police investigations were launched to track down the source of the claims. Despite this quick action, by the time the panic had subsided around 10,000 customers had withdrawn $US 29 million, a number that was kept low because the panic was during a weekend, so withdrawals ended when the ATMs were emptied.

Bank runs are quick and dangerous events that can happen to even entirely solvent institutions. Once a run starts, withdrawing cash can actually be the best choice because the bank will run out of cash, and if it fails as a result (which is possible), deposits over the deposit insurance limit will not be covered. Even worse, a run on a bank can turn into a systemic customer panic and affect other banks in the same lines of business when customers see them as guilty by association.

In new research, we examined the largest customer-driven bank panic in US history to understand why customer fears grow into serious bank runs. We found that customers do not actually lose trust in all banks. Instead, they target individual banks based on their assessment of which banks are similar to those that have already experienced a run. It only takes a run on a few banks to spark systemic breakdown, which has disproportionate economic knock-on effects. The bank panic of 1893 triggered a devastating economic crisis that saw real earnings decline by 18 percent from 1892 to 1894. Despite the efforts made to control the panic and limit the damage for individual banks, 503 banks were suspended. Two thirds of them failed. But they weren’t all insolvent.

Why a bank run turns into panic

We found three factors that influence the likelihood of panic spreading.

First, bank runs spread among communities with similar compositions of race, national origin, religion or wealth, suggesting a role of prejudice even in such important economic decisions as withdrawing money. Essentially, people are more ready to believe members of their community who found reason to panic than they were members of different communities. The more diverse the population the less vulnerable it is to a bank run, as weaker social ties reduce the likelihood of members agreeing on whether something, in this case whether a bank was in crisis or not.

Secondly, customers draw associations between banks of a certain type, increasing the likelihood of panic at banks of a similar form. Customers tend to rely on more practical methods rather than deeper reasoning when assessing a bank’s vulnerability. This was also seen in the 1985 Ohio savings and loan crisis, which spread to savings and loans in other states but not to other forms of financial institutions in Ohio. In the 1873 bank panic in New York City, the loss of depositor confidence was confined to savings banks, with nearly all savings banks experiencing a run, while only one national bank did.

Thirdly, customers also distinguish between banks that have a shared position in the network of correspondent banks. The correspondent banking system did not directly transfer vulnerabilities between the banks during the 1893 panic, but customers viewed the links between their banks and the ones that experienced a run as a threat.

These effects occurred despite efforts to cool down the panic, especially by the press. For example, an article in the Aspen Daily on July 21st, 1893 read, “there is no reason why Aspen people should get excited over the situation here. All of the Aspen banks are backed by conservative businessmen whose business careers have not been marked by wild speculations or daring ventures.” This quote was typical of newspapers at the time, but the panic still continued. Consumers who are worried about safety listen to friends, not to the press. 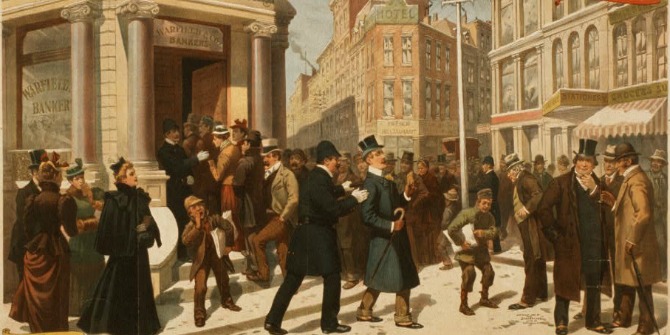 Bank panics are an ideal setting to observe customer reactions to perceived threats because they are consequential but have weak economic rationale for each run. However, these findings have broad applicability to other organizations. For example, even today Chinese consumers prefer to buy their baby milk formula overseas after the melamine scandal in 2008, even though few milk producers was found to be tampering with their products. In the US, Audi was a marked brand for a decade after the (false) claims of sudden acceleration. Crucially, we find that customers make distinctions based on easily observable, even if superficial characteristics, which can disproportionately and adversely affect the firm irrespective of its actual conditions, such as a bank’s financial health.

Organizations can protect themselves against falling victim to a run of customer panic by differentiating themselves from their competitors. It is common for businesses to create connections with their peers to gain acceptance as a legitimate player. Imagine starting an organization doing banking services but without the name “bank” and other signals of bank-ness. But, as our research shows, if one organization in the group breaks its customer’s trust, suspicion can fall on all. Apple’s recent stand-off with the FBI over creating backdoor access to customer devices is a good example of differentiating from the pack to maintain customers’ trust. Similarity is often needed for acceptance, but too much similarity is a path for spreading guilt by association.

From a community perspective, safety is gained through having a diversity of organizations, because the distinctions that people make among organizations by type can be a safety valve. In banking, for example, it is actually safer to have both a savings bank and a commercial bank in a community, because runs are likely to hit one type rather than both. We often seek organizational diversity because of its everyday benefits, and it is particularly valuable in emergencies. Similarly, for firms it is useful to know that a greater diversity of customers, and therefore a greater diversity of opinion on the organization, less customers are likely to follow if one group panics. For safety, firms should keep some distance from each other, and stay close to a diverse set of customers.

This article is based on the paper, ‘Ripples of Fear The Diffusion of a Bank Panic’, in the American Sociological Review.

Henrich R. Greve – INSEAD
Henrich R. Greve is a Professor of Entrepreneurship and the John H. Loudon Chaired Professor of International Management at INSEAD. He studies organizational learning, including studies diffusion of innovations and customer responses. He is a co-author of Network Advantage: How to Unlock Value from Your Alliances and Partnerships.

Daphne Teh – INSEAD
Daphne Teh is a Ph.D. candidate at INSEAD. She studies organizational learning and inter-organizational ties, with a focus on the spread of misconduct among corporations and non-profits.