The 2016 election makes no sense. But this should not distract attention from the legitimate anger many Americans feel.

The 2016 election makes no sense. But this should not distract attention from the legitimate anger many Americans feel.

Violence at Donald Trump’s rallies signals the intensity of anger in the US political arena. It is far from the only sign, however, and Ron Pruessen argues that we close a window on important characteristics of the current American landscape if we confine our reactions to simply castigating such “madhouse” behavior.

The 2016 election process to date could be called a “madhouse,” given political pandemonium unseen in the US since 1968 – or we could call it a “house of mad,” given the intense anger that is generating the bedlam. It’s both of course, and “Double, double toil and trouble” could be a (too long) Shakespearean hashtag.

Donald Trump has to be seen as the madhouse maestro – or the mad madhouse maestro. Who else has done more to stir the caldron? “I don’t want to see riots,” he warns squirming Republican elders, as he gathers caterwauling Trumpaniacs.  His rallies now routinely see protestors sucker-punched and pepper sprayed, while the candidate casually urges supporters to “knock the crap out of them.” In South Carolina, Trump waxed nostalgic while producing shivers in those who remembered the region’s troubled history: “They used to treat them very, very rough, and when they protested once, they would not do it again so easily.”

And yet, as much as Trump (backed by his chorus of “apprentices”) would like to be the avatar of mass sentiment, he is only one of its representatives. Frustration and anger are powerful forces in the United States of 2016 and many voices are contending for solos. Texas Senator Ted Cruz, New Jersey Governor Chris Christie, and others have been auditioning, of course – but Vermont Senator Bernie Sanders would not be a surprisingly serious challenge to former Secretary of State Hillary Clinton if it weren’t for his ability to vocalize fury at the other end of the political spectrum.  Nor are punched-out protestors simply quiet bystanders: it isn’t really so unreasonable (for a change) for Trump to say that they are “not innocent lambs.”

Media antennae constantly pick up the signals of grassroots fury.  Fox News is essentially hard-wired for this, but CNN and other broadcasters have been unable to resist the perceived viewer appeal of bare-knuckled combativeness – amplifying it in the process. Even the mild-mannered Canadian Broadcasting Company has taken to using a red-faced (orange-faced?) Trump in print ads aiming to attract viewers.

The discrete and genteel are struggling in 2016.  Clinton will likely get to the Democratic nomination, but she’s running a punishing gauntlet – and Ohio Governor John (“I’m the only adult in the room”) Kasich is a longshot Lancelot. Americans have loved the theatrical classiness of Downton Abbey, but the PBS crowd is currently far-outnumbered by the fans of The Walking Dead, the shoot-‘em-up pleasures of a videogame like Call of Duty, and big screened Marvel Comics heroes like Thor and Iron Man. (Maggie Smith’s formidable Dowager Countess vs. Trump? A cage-match pitting dry barbs against a battle axe? No contest so far this year.) 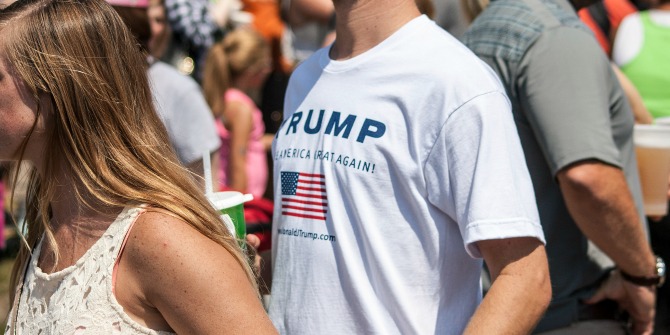 It’s tempting to be mostly amused by 2016’s “house of mad” spectacle – to even kind of relish it in the way we might enjoy a two-hour horror movie.  (In the 18th century, well-to-do tourists would visit London’s Bethlem Hospital – nicknamed Bedlam – for the thrill of seeing “lunatics.”) But the fury boiling away in this election season deserves to be taken more seriously.  At the least, it may actually determine who leads the United States for four years – and as the Bush and Obama presidencies suggest, this entails significant impact on both Americans and the rest of the world.  As well (though this is often drowned out by OMG/WTF laughter or hyper-mode media coverage), the fury of Americans is far from absurd.  Understandable disdain for bizarro behavior by Trump and others should not distract attention from the fact that Americans have much about which they can be legitimately angry.

Isn’t anger a perfectly reasonable response to two lost wars under two successive presidents? A tragic waste of thousands of lives and trillions of dollars – leaving today’s Iraq a madhouse in its own right and Afghanistan not even close to “Afghanistan good enough.”

Or why shouldn’t Americans be furious about the financial market abuses that produced the 2008-09 economic crisis, even if signs of recovery have slowly emerged? It is not at all clear that institutions “too big to fail” (or 21st century snake-oil salesmen) have been adequately restrained – while it is all too clear that the middle class remains in diminished condition because of an economic system in which greater inequality is trending.  If “globalization” is too simple an explanation (or target), serious economic problems are nonetheless plaguing millions of citizens.

Sadly, the list could go on – and it is important to recognize that it is not a tally produced in a madhouse. Wild responses in some cases, yes, but real (and infuriating) problems.  Bottom line: Trump, Cruz, hyper-media coverage and the rest should not completely dominate our perceptions of what is going on in 2016, and should not be allowed to give anger no more than a bad name.

Ron Pruessen – University of Toronto
Ronald W. Pruessen has served as the Munk School of Global Affairs’ Director for International Partnerships & Research and is former Chair of the Department of History, University of Toronto. His primary research and teaching interests are in 20th century U.S. foreign policy and international relations. Early work focused on the Cold War (e.g., John Foster Dulles: To the Threshold, 1888-1952) and he recently co-edited (with Soraya Castro) Fifty Years of Revolution: Perspectives on Cuba, the United States, and the World.  He is currently writing a study of the way Barack Obama’s foreign policies relate to deeply rooted American views and behavior.