For 230 years federalism, as set out in the Constitution, has been the bedrock of the US system of government. John Kincaid writes that American federalism has evolved to become a mixture of dual powers and responsibilities, and cooperation and coercion between the federal government and the states. He argues that it is these facets of federalism which are and will continue to operate as a check on the worst initiatives of Donald Trump’s presidency.

American federalism today is a highly institutionalized mix of dualism, cooperation, and coercion that makes it hard for presidents to alter. Long-term trends point to more centralization and polarization, even while states and localities remain independently innovative on many fronts. President Donald Trump, who has never publicly tweeted or spoken the word “federalism,” will not reverse those trends.

Trump’s biggest impact to date on federalism was the Tax Cuts and Jobs Act (2017), which capped at $10,000 the amount of state and local taxes taxpayers can deduct from their federal income-tax liability. The uncapped deduction dated back to 1862. The cap adversely affects taxpayers in high-tax Democratic states such as California more than those in lower-tax Republican states.

Trump’s biggest impacts on federalism in the long-term will flow from his Supreme Court appointments. More conservative justices will be more friendly to state powers, though not across the board or always for federalism reasons. For instance, because authority for culture-war issues such as abortion and LGBTQ rights historically resided in the states, conservative justices will resuscitate some of that authority; elsewhere, as in commerce and gun regulation, they will often assert federal authority over the states.

Otherwise, consistent with American federalism’s dualism (where power is divided between the federal government and the states rather than being shared), states still exercise policy autonomy in many ways: for example, legalizing medical and recreational marijuana and physician-assisted suicide, and pursuing climate-change initiatives, charter schools, abortion rules, consumer protection, occupational licensing, and autonomous-vehicle regulation.

How dual federalism can curtail a transgressive president

Dual federalism has four foundations. First is the US Constitution, whereby limited powers are delegated to the federal government; all other powers remain with the states. The Constitution is thus silent about such matters as consumer protection, education, environmental protection, health care, corporation charters, and local government.

Dualism further allows state officials, such as governors and attorneys general, to sue the federal government to block policy initiatives. Democratic attorneys general have filed an unprecedented number of lawsuits against Trump’s policies—many successful. Additionally, New York State shut down Trump’s charitable foundation in 2018; several attorneys general are investigating his businesses; and pardons Trump might give his compatriots for federal crimes will not shield them from state prosecutions.

Second, in Sturges v. Crowninshield (1819), the Supreme Court said states can exercise powers delegated exclusively to Congress so long as Congress does not preempt them or the court does not find them in violation of interstate commerce. States can thus legislate in areas of exclusive federal power when the federal government is unable or unwilling to act.

Third, in Prigg v. Pennsylvania (1842), the court said states were not obligated to enforce the 1793 Fugitive Slave Act. States could pass “personal liberty” laws prohibiting state and local officials from apprehending runaway slaves. Prigg established the foundation for the court’s anti-commandeering doctrine articulated in Printz v. United States (1997), for state legalizations of marijuana despite its federal illegality, and for sanctuary jurisdictions whose officials refuse to cooperate with federal immigration authorities. 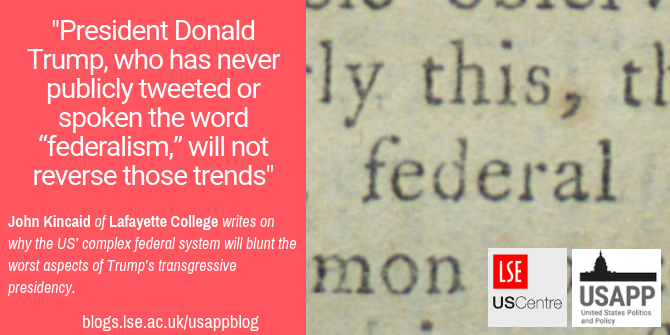 Fourth, in Michigan v. Long (1983), the court held that state high-court rulings that increase rights protections above standards set by the US Supreme Court under the US Bill of Rights cannot be reviewed by the Supreme Court when based solely on “adequate and independent” state constitutional grounds.

These facets of dual federalism can blunt transgressive presidential behavior.

Cooperative federalism also has existed since 1789 when Congress deferred to state concerns in the Judiciary Act by creating federal district-courts wholly within state boundaries. Cooperative federalism entails the willingness of federal officials to negotiate with state and local officials over formulating and implementing federal policies. Most domestic policy is implemented by states and localities.

Congress regularly accommodated states’ concerns until the early twentieth century when it began using grants-in-aid to buy states’ compliance with federal policies. Gradually, cooperation was redefined as the willingness of state and local governments to cooperate with the federal government—not vice versa. This conception was driven partly by belief that the federal government possessed superior expertise. Thus, contemporary ‘cooperative federalism’ is said to situate “uniformity and finality for first-order norms at the national level, while allowing dialogue and plurality at the level of state implementation of those norms” (p.164).

Despite the system’s regulatory character, the president lacks authority to consolidate the system’s 1,319 grants, alter their funding (about $749 billion in 2019), or add funding conditions. Consequently, for instance, Trump has been prevented from cutting off grant funds to sanctuary cities. Within limits, the president can waive federal law in some grants, such as the huge Medicaid program: for example, waivers for willing Republican states to require Medicaid recipients to get jobs. But Trump cannot require states to impose work rules. The intergovernmental grant system is highly bureaucratic, mostly congressionally driven, and resistant to gross presidential interference.

Coercive or regulatory federalism describes the post-1968 era in which the federal government can assert its policy will unilaterally over state and local governments, there are few constitutional or political limits on exercises of federal power, elected state and local officials are no longer policy-making partners with federal officials, and federal rules affect most state and local policies.

State and local public-employee unions also played major roles by advocating federal interventions to benefit their interests, as in one of the Supreme Court’s most momentous federalism rulings, Garcia v. San Antonio Metropolitan Transit Authority (1985), which admonished states to rely on the national political process rather than the Tenth Amendment to protect their powers.

Coercive federalism also was facilitated by the 1960s’ decline of the Democratic South as a powerful force in Congress where its representatives had long protected state and local government prerogatives from federal coercion.

Coercive federalism will endure but be mitigated slightly by Trump’s deregulation drive, which affects state and local governments as well as the private sector. However, due to dual federalism, presidential deregulation cannot, in most cases, prevent states from adopting vacated federal regulations under their own law.

Even though policy alterations from one president to another are common in this era of polarization, there is more continuity than discontinuity in the federal system because the system’s coexisting dual, cooperative, and coercive states are highly institutionalized and pushed by recent history in their current direction.

John Kincaid – Lafayette College
John Kincaid is the Robert B. and Helen S. Meyner Professor of Government and Public Service and Director of the Meyner Center for the Study of State and Local Government at Lafayette College, Easton, Pennsylvania. His most recent books are the co-edited Courts in Federal Systems: Federalists or Unitarists? (2017) and Identities, Trust, and Cohesion in Federal Countries: Perspectives from Public Opinion (2019).