Wind power is becoming an increasingly important part of the US energy mix, taking up more than four per cent of the total electricity generation as of 2014 and growing by 25.8 per cent annually for the past decade.

But have we been able to put the wind turbines in the right locations? It is widely acknowledged that the economic efficiency and environmental benefits of wind farms critically rely on proper siting. For instance, wind turbines should be located in places with strong and stable wind, reasonably good access to transmission lines and high demand for electricity. In my recent research, I look at the location efficiency of wind power projects across the continental US by comparing the current distribution of wind farms to an ideal profit-maximising scenario and investigate the factors that might contribute to it.

How efficiently are wind farms distributed?

The National Renewable Energy Laboratory (NREL) is a US government’s institution dedicated to researching and developing renewable energy technologies.  The NREL suggests that, in order to operate normally, wind farms should be placed in locations with wind power classes (WPC) equal or superior to 3. However, in reality, 30 per cent of the US wind farfsiems are located in places with WPC less than 3. Figure 1.1 plots the distribution of wind farms across different wind power classes. Figure 1.2 and 1.3 further suggest that these wind farms are neither very close to the electricity grid or face higher electricity prices, which is a clear sign that they are indeed misplaced. 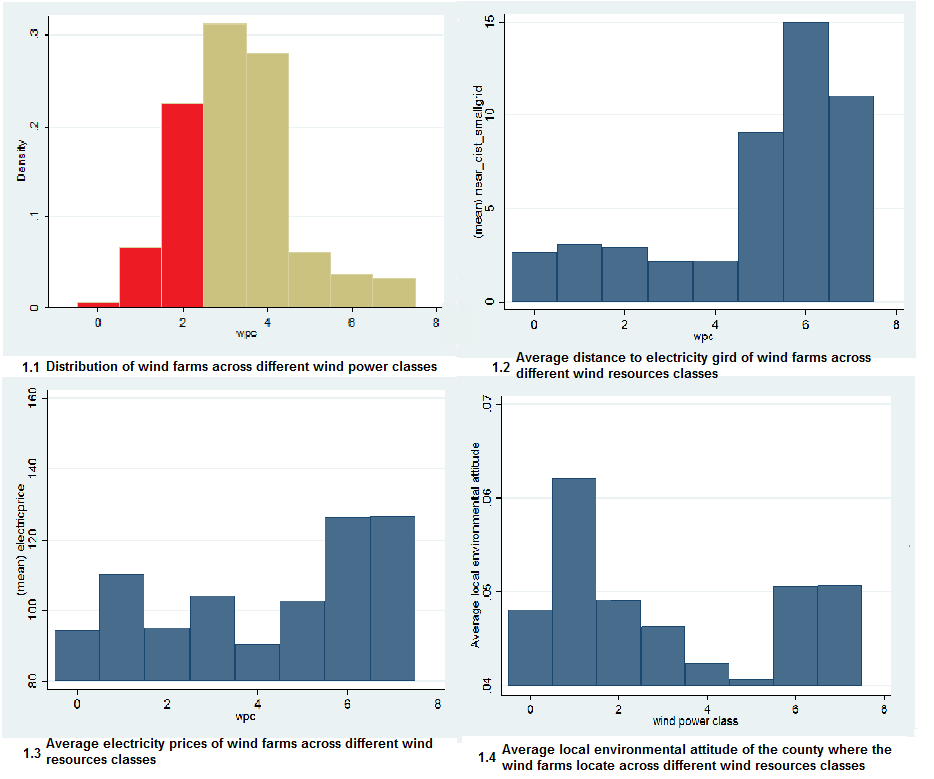 To measure the extent of this misplacement, I divide the continental US into more than 70,000 10km-per-10km cells. I calculate the expected profits of a typical wind farm in each cell, taking into consideration local wind resources, distances to transmission devices, electricity prices and land value. I then consider how the average profitability of current wind farms would be had they been put in the best spots.

The natural next step is to examine what factors contribute to the observed misallocation of wind farms. Interestingly, I find county-level misallocation positively correlated with county-level environmental attitudes, measured by support for the democratic or green party. Further investigation reveals that wind farms in more environment-friendly counties tend to be set up by local and non-profit investors; they are closer to cities and more populated areas; they are much less responsive to local fundamentals such as local wind resources, and they have significantly worse actual performances. This is a clear sign that a large proportion of the within-state and within-county misallocation in wind farm location is attributable to investors’ ‘acting green’ behaviour.

The role of energy policies

Energy policy is probably one of the most salient issues in renewable energy. It is therefore important to examine the role of subsidies in determining locational efficiency. Intuitively, state-level subsidies can reduce welfare if the less windy states offer excessive subsidies. This does not appear to be an issue in the U.S. though, as a majority of the observed misallocation occurs within state, and in reality states with better wind resources and wind farm profitability prospect are the ones with more generous renewable energy subsidies.

I then consider how the presence of state-level policies affects wind farm locational efficiency within the state over time. It seems that renewable energy policies play a mixed role. Grants that do not depend on performance do not encourage better location choices, while benefits which reward efficiency, such as corporate income tax credits and feed-in tariffs, spur projects to find windier spots.

Further examination reveals that performance-based subsidies improve local allocation efficiency because they attract profit-oriented investors to windy counties that are ‘browner’, i.e., which use traditional energy sources. This type of subsidy effectively offsets the inefficiency caused by local and non-profit investments.

What can we learn from it?

One of the most important lessons for us to learn here is that we have paid too little attention to the importance of green preferences. Investment choices may give green investors private benefits, such as publicity. As a result they may place wind farms closer to them. This incentive will decrease the profit prospects of their projects since they carry out less thorough search for the best location.

When comparing projects with similar cost amounts, the presence of private benefits is shown to be negatively correlated with the public benefits wind farms generate. Renewable subsidies should be designed in a way to realign public/private benefits/costs of renewable investments. In light of this, non-performance-based renewable support schemes clearly dominate since they tend to attract “greener” but less efficient investments.

Regarding people and organisations with strong environmental preferences: instead of encouraging them to invest in their own renewable energy projects, a better alternative would be to offer them access to markets for “green” electricity, where they can purchase electricity generated from renewable sources at a premium.

This article originally appeared at LSE Business Review and is based on the authors’ paper Where Does the Wind Blow? Green preferences and spatial misallocation in the renewable energy sector, presented in the 2016 conference of the Royal Economic Society