Throughout the twentieth century, there are many examples of nations and their governments imposing restrictive population policies on their citizens in response to perceived political crises and international pressure. From China’s ‘one-child’ policy, the pro-natalist rhetoric of the former USSR to the post-WWII containment measures of the USA, such legislation has had one major thing in common: the perception of women’s bodies as political resources. Katherine Williams recommends Reproductive States: Global Perspectives on the Invention and Implementation of Population Policy to readers interested in biopolitics, gender, statecraft and world systems. 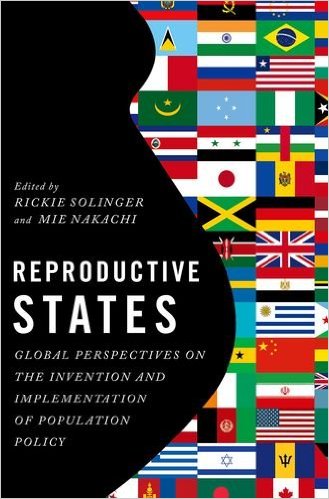 Reproductive States: Global Perspectives on the Invention and Implementation of Population Policy, edited by Rickie Solinger and Mie Nakachi, has brought together experts from around the world to investigate the population policies of ten key countries: Brazil, China, Egypt, Germany, India, Iran, Japan, Nigeria, the former USSR and the USA. The volume thus comprises ten principal case studies that explore how some of the world’s most populous nations have created and implemented their population policies throughout the twentieth century. Such policies, believe the editors, have often been in place to affect the rates of reproduction for certain groups: this can be to promote growth amongst particular members or to diminish it amongst ‘undesirable’ diaspora groups.

The volume suggests in its introductory chapter that even countries with the most profound socio-cultural and political differences (such as the USA and the former USSR) developed population policies that were remarkably similar as they had made a commitment to ‘biopower’. Biopower, or biopouvoir, is a term originally employed by French philosopher and social theorist Michel Foucault. Biopower, as theorised by Foucault, relates to the ways in which nations and governments attempt to control populations through the subjugation of their bodies. Such subjugation typically comes in the form of regulatory practices that conceive the state as having a ‘body’ which must be preserved at any cost (for more, see The History of Sexuality). In Reproductive States, the editors describe biopower as the capacity of a government to regulate the life, health and the body of its citizens as it sees fit.

A troubling yet familiar example of what can happen when every aspect of citizens’ private lives are under state control is Nazi Germany’s policy of sterilising ‘undesirable’ individuals. Nazi policies were galvanised by racialised ideals of ‘natural’ superiority over other racial groups deemed to be Lebensunwertes Leben (‘life unworthy of life’); these policies were specifically designed to serve a larger political agenda. Whilst it may seem trite to compare the population policies of the ten countries in this volume to those of Nazi Germany, the editors argue that ‘each country crafted policies and practices that valued and rewarded the reproductive contributions of certain women or certain populations (as opposed to individuals) while degrading and constraining reproduction among ‘‘inferior’’ populations’. We can see this happening all over the world in recent times: a prime example being the forced sterilisation of indigenous women during Alberto Fujimori’s presidency of Peru, a country sadly not explored in this volume.

In ‘China’s Population Policy in Historical Context’, Tyrene White shows how the country’s infamous one-child policy is arguably one of the definitive examples of state intrusion in the reproductive habits of its citizens. The gendered dynamic of the policy saw millions of women undergo involuntary sterilisations, forced abortions, humiliating gynaecological exams and constant surveillance by the state. The one-child policy did not officially begin until 1979 (and was formally ended in 2014), but the development of China’s post-war biopower saw the enforcement of birth limits from the 1950s. Its initial development was, argues White, a culmination of political and policy processes that started in 1949 after the disasters of World War II, and was subject to changing political winds and leadership struggles within the Chinese Communist Party (CCP) in both the pre- and post-Mao era. The consequences of such policies are perhaps unsurprising: Indian economist Amartya Sen estimated in 1990 that due to restrictive population policies and the preference for baby boys in some cultures (including China), over 100 million girls are missing, aborted, killed or neglected to death. 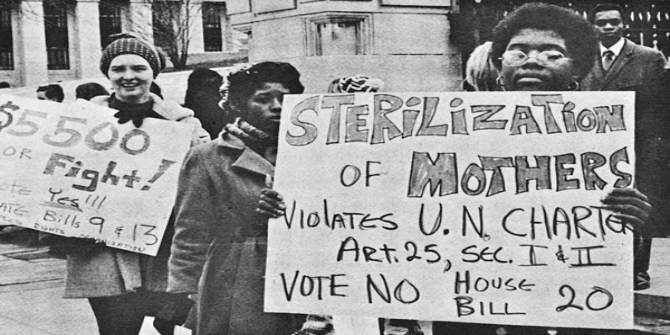 Often a country with a sufficient amount of biopower can throw its political weight behind forcing change in developing countries. In 1966-67 the USA withheld food shipments to India because the administration did not believe that India was implementing its population control policies with enough force. President Johnson remarked: ‘I’m not going to piss away foreign aid in nations where they refuse to deal with their population problems.’ The writers in the volume illustrate the ‘guidance’ that the US and the UN offered both its allies and adversaries: the ‘deindividuation’ of women on a global scale and ever-changing geo-political interests saw the US and even the UN support the sterilisation of eight million people in India in 1976 and twenty million people who broke the one-child policy in China in 1983. It was not until 1985 that the UN issued a statement recognising a woman’s individual right to control her own fertility. This jumble of geo-political interests, Cold War rhetoric and Malthusian theory leads us inevitably to the question: who deserves to be born?

Solinger explores the US position further in the chapter ‘Bleeding across Time: The First Principles of US Population Policy’. The author believes that the origins of US population policies can be found in the country’s pre-national period when legislators ‘crafted laws to regulate sexual intimacy for a society in which some people were the property of other people’. Controlling reproduction at the crucial early stages of the USA’s development was thus a key strategy for enforcing racial distinctions and promoting segregation between different groups, ensuring that white settlers had both an economic and ideological stronghold. The ‘First Principles’ of population policies, argues Solinger, helped not only to control the reproductive rights of black and Native American women for economic gain (i.e. to maximise labour potential), but also to help maintain and extend slavery, which required racialised policies to control women’s access to their own reproductive functions. Consequently, despite the birth of the civil rights movement and the end of segregation during the 1960s, the population control measures advocated by various US administrations during the post-WWII period and beyond have centred around notions of containment, as if the growth in the birth rates of certain groups should be responded to as though disease outbreaks.

As we have seen from the examples proffered so far, the racialised dimension of countries’ population policies cannot be overstated. However, it is also the degraded status of women internationally that has facilitated state intervention in the private lives of citizens, and rendered the female body as a political tool with which ‘the state’s size, character, and position in the world can be shaped’. When women are treated as second-class citizens, any policies that threaten their personhood can be rationalised as existing for a greater political good.

In the USA today, the influence of Solinger’s notion of the ‘First Principles’ can arguably be seen. From cuts in federal funding to organisations such as Planned Parenthood, Personhood bills designed to give foetuses the same legal status as people from the moment of conception and the risk of being jailed for having a miscarriage, we can see that the struggle for reproductive justice in the US remains an uphill battle. And it is a battle which is infused with the same racialised and sexist tropes regarding purity, the sanctity of life, civic responsibility, freedom and the so-called ‘right to choose’. The question is, ultimately, who’s doing the choosing?

Reproductive States offers readers a fascinating yet sobering insight into the population policies of ten countries, illuminating not only how such measures have had a real-world impact on women and men from different population groups across the world, but also how these measures have reflected larger global concerns about over-population and the geo/bio-political agendas of the countries themselves.