Why are some conspiracy theories more popular than others? Joseph E. Uscinski writes that conspiracy theories which go past partisan rivalry and target a political or economic system, or even a whole class of people, are usually much more attractive to a larger number of people than theories which concern a single event or person. He argues that Donald Trump has taken advantage of this bias towards more general conspiracy theories, and has employed them extensively during the current election campaign to gain voters’ favor.

It used to be that brains and hard work could really get you somewhere. But, those days are over. The one thing you really need to succeed in today’s world – and I’m sure you’ve already guessed it – is a good set of conspiracy theories.

Now, I know what you are thinking: shape-shifting lizard people! Well, those pesky reptilian-elite make great fodder in certain circles, but only four percent of Americans believe in them. Successful conspiracy theories need to be about the most familiar (and despised) villains, so if you want to reach bigger audiences, you will have to do better.

Partisan conspiracy theories are certainly clever, and they can sometimes get about half of a party’s members behind you. For example, theories about the Bush Administration’s complicity in the 9/11 terrorist attacks, or nagging suspicions over Barack Obama’s birth certificate can net you almost a quarter of the public. You’re off to a good start, but the partisan cues in such theories tend to turn off opposing partisans, and this limits your audience. Democrats are unlikely to think Obama was born in Kenya, and Republicans are unlikely to entertain 9/11 Truth theories.

If you want to go big, try conspiracy theories that go beyond partisan gripes – you could go after the political or economic system, an entire class of people, societal institutions, or you don’t even have to name a specific villain if you don’t want. You could just hint at shadowy forces instead. People, after all, can imagine their own villains based on your loose rhetoric. Take JFK assassination theories for example. As many as three-quarters of Americans bought into these theories at one time, mostly because everyone gets to accuse whoever they want. Whether it’s Castro, the FBI, the CIA, or the military-industrial complex, people keep a list of mustache-twirling conspirators just waiting to accuse.

Let’s face it: As Figure 1 shows, the American public is primed and ready for some good old paranoid yarn-spinning. When a representative sample of Americans was asked to agree or disagree with the following statements, “Much of our lives are being controlled by plots hatched in secret places,” “Even though we live in a democracy, a few people will always run things anyway,” and “The people who really ‘run’ the country, are not known to the voters”, very few disagreed. In fact, most people either agreed or were in the middle. These views are the underpinnings of support for the more specific conspiracy theories that you can boldly expose. 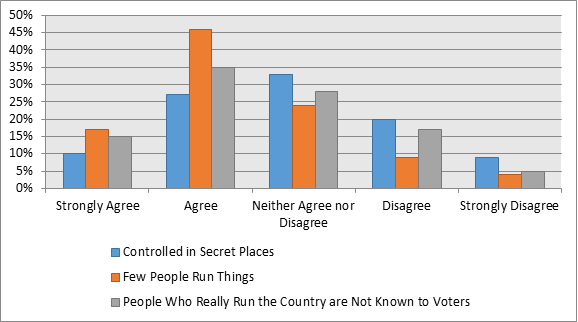 So let’s take what you have learned so far, and apply it to a real problem you are having. Let’s say, for example, you want to run for president. Your target demographic is the 130 million people expected to vote in the upcoming election. To shoot for the stars, you’ll need the most intriguing theories about the most dastardly villains. Government experience, a policy platform, the support of your party, a tether to truth, and basic knowledge of how governments and economies work just won’t do. Not anymore! You need conspiracy theories! And not just your run of the mill tinfoil hat theories, you need to bring out the big guns.

If you want to start with just getting your feet wet, take to Twitter with a few science or medical conspiracy theories. Claim that vaccines cause autism, for example. The audiences for such theories are small, but their devotion more than makes up for what they lack in numbers. Just be aware that your tweets could lead to lowered vaccination rates and the spread of an easily preventable disease. If needlessly endangering the lives of children, the elderly, and the sick suits you, improvise with your own little spin and claim that HPV vaccines intended to prevent cervical cancer actually cause “mental retardation.” Scaring people over modern medicine can definitely get you an audience, but if it’s not your style, try stoking irrational fears about our food supply. From these, you’ll have no trouble moving into deeper waters.

There is nothing a conspiracy-minded partisan suspects more than an opposing partisan. If you are a Republican, for example, you could claim that President Obama is a foreign usurper, a secret Muslim, an Isis supporter, or even that he faked his college education or plagiarized the book he wrote. With such poor approval numbers among Republicans, President Obama makes a perfect target for right-minded conspiracy theorists. And if that isn’t enough to rouse your party, try resurrecting conspiracy theories from previous Democratic administrations, no matter how long they have been debunked. Of course, partisan conspiracy theories can only get you so far – so if you want to reach bigger audiences, you will have to go after the villains that lie beyond partisan rancor.

You could resurrect popular non-partisan conspiracy theories by just adding a new twist—JFK theories make great fodder for this. With a majority of Americans currently buying into some conspiracy surrounding the assassination – a nostalgic trip down the rabbit hole might help you decimate your opponents. You could even tie the media into your conspiracy theories. Given that a majority of Americans have little or no trust in the mass media as it is, a few accusations of cover-up and dishonesty can help feed our nation’s appetite for cynicism.

But, if you want to play in the big leagues, try scapegoating foreigners. Our data, collected from letters to the editor of the New York Times and shown below, illustrates that for well over a century, Americans have chosen foreigners as the preferred target of their conspiratorial ire, more so than either side of the political spectrum combined. 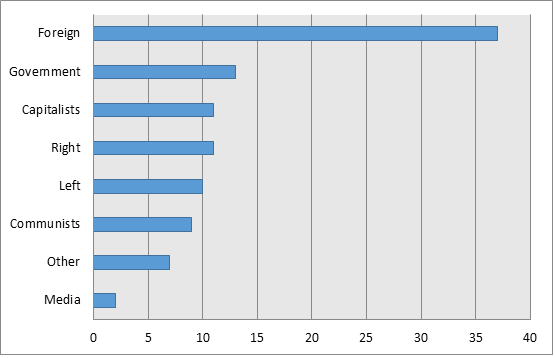 Mexicans and Muslims are the obvious choices to start. Consistent majorities want to tighten the southern border, and of course, in the post-9/11 age, who doesn’t enjoy a good bit of anti-Islamic fear-mongering. Maybe suggest that Mexico is purposely sending murderers and rapists over our border to get us, or claim that ISIS is paying the phone bills of Syrian refugees. Make sure the stakes are high; let everyone know that those foreigners are “killing us.” And if a tragedy occurs on American soil, the best way to take advantage of it is to suggest a cover-up, and that even more killers are still lurking around. Now, you are on your way!

But let’s say you reject racism and xenophobia, want to attract a diverse group of millennial voters, or would prefer class-based conspiracy theories. Well, nobody makes a better scapegoat than those dastardly one-percenters and their evil corporate interests! You could call them greedy, say the financial system is fraud, and claim that they have turned the political system into an oligarchy.

Remember, your conspiracy theories need not be consistent: just like Hitler played on German fears that the Jews were simultaneously rapacious capitalists and subversive communists, don’t be afraid to the call the one percent a bunch of free-market gamblers, while at the same time saying that they control a rigged system. Eat the rich, indeed!

If you are still unsure, take a look at some recent success stories. The perfect case study of conspiracy theory entrepreneurship is Britain’s David Icke. Icke spent years toiling away on his reptilian conspiracy theories, garnering neither fame nor fortune. Then, outside a Bilderberger meeting with Alex Jones, he widened his conspiracy net to target the groups anyone could hate—corporations, political parties, and governments—and was able to raise untold sums of money in the summer of 2013. By sticking it to these broader categories of villains, Icke could set his sights even higher than ace conspiracy theorist if he wanted to. Gosh, if he wasn’t British, he could run for president.

Win or lose, conspiracy theories are your ticket to success. When things don’t go your way, claim that the system is corrupt, that elections are rigged, that votes have been stolen, and that others are biased against you because they are disloyal…or Mexican. When it is shown over and over again that you theories are wrong, just take credit for being right anyway! It’s not like the news media will know what to do about it!

Remember, there is a ready-made audience for conspiracy theories. Just harmonize your rhetoric to the needs of the audience and play a different tune accordingly.