Trump, Brexit, and the West’s “Mad as hell” moment

Trump, Brexit, and the West’s “Mad as hell” moment

With the popularity of Donald Trump, and the UK’s recent vote to leave the European Union, we live in seemingly strange political times, writes Melissa Smith. She comments that the sluggish world economy, migration crisis, and negativity towards globalism all appear to be fuelling the West’s current “Mad as hell” moment. It’s hard to stay mad forever, though, and in Donald Trump’s case, if he wishes to win the White House, he will need to continue to fuel his supporters’ anger until November.

It’s an odd time around the world. Terrorist attacks have left a number of countries reeling, voters in several nations are flirting with (or actively courting) right-wing movements, and Great Britain is leaving the EU.

What’s going on? It’s not that there is a lack of big donors eager to influence the election. Super PACs have already raised more than $755 million, and the general election has not yet kicked off in earnest. There are more than 2,300 Super PACs registered so far, almost 1,000 more than in the 2012 presidential election.

What’s different is that the presumptive Republican presidential nominee has received almost none of that Super PAC money, and that he raised only $3.2 million in May. That is, pardon the phrase, trump change. Clinton raised $26 million in that same month. She has already purchased more than $25 million in television ad buys. With all this money in the bank and TV time reserved, one might think that she would be polling significantly higher. Yet the polls don’t indicate a huge lead for Clinton.

Trump claims to have raised $11 million in just a couple of days in June, but part of that is money that Trump threw in to match the small donations he received. It’s probably a good sign for his campaign that he is actually receiving small donor funding, because that had been missing in his campaign. But he has been consistently dogged by the perception that he can’t raise big money.

So, there is a well-financed presumptive Democratic candidate and a Republican with very little in the way of big money. The world is truly upside down, as Republican presidential candidates have traditionally attracted as much or more money than Democrats. Plus, Trump isn’t too far behind in the polls, and some track him even with Clinton.

This leaves scholars and election experts groping for answers.

While this is not a scientific explanation, the nation (and indeed, much of the Western world), seems to be having a Howard Beale moment. You might recall Beale as the “mad prophet of the airwaves” from the 1976 movie “Network.” He had been a top-rated anchor, but his numbers began to slip. He was fired, but reacted in an unexpected way. After his unorthodox approach proved popular with the nation, he was given his own show on which to rant about hypocrisy and the de-humanization of society. His catchphrase was “We’re mad as hell, and we’re not going to take this anymore.” There are scenes of random Americans opening their windows and shouting this phrase as loudly as possible. It was clear that he had touched a nerve, so the network gave him his own show and exploited his behavior for ratings.

You see a similar nerve being touched in several countries today: Great Britain with the Brexit vote; increased support for the radical right in France; in Austria the far-right presidential candidate barely lost the presidential election; in Hungary the right-wing Christian Democratic Party has won the last two parliamentary elections; Scotland wants to leave the UK, and there is a growing number of people who want to see Ireland and Northern Ireland reunited.

While people aren’t opening up their windows and shouting that they are mad as hell and aren’t going to take it anymore, they are doing the equivalent through the ballot box and through their support for political candidates and movements. The migrant crisis, a still-sluggish world economy, a continuing loss of economic stability, and a reaction against globalism seem to be fueling this dissatisfaction.

In the United States, a similar reaction seems to be taking place. Instead of Howard Beale, Donald Trump is the mad prophet of the airwaves, exposing the hypocrisies of our time. Large masses of people, unhappy that they haven’t had raises for several years, suspicious of government and mad at unfulfilled Congressional promises, are mad, and they are making their anger known.

Many mainstream Republicans seem surprised by the depth of the anger. While not all Republicans are doing well financially, most of those who are elected in Washington or who are members of the party establishment still have jobs and decent buying power. Middle-class Americans have been watching their buying power erode, and blue-collar Americans are afraid their jobs will be moved overseas or replaced by automation. The depth of their own fear and anger might surprise even those who are supporting Trump.

Few polls show either Trump or Clinton breaking 50 percent. Rasmussen reported a Trump +4 lead in its most recent poll released June 30. It’s the first one to show Trump ahead. Is this an anomaly or the beginning of a trend? Summer tends to be the doldrums in politics, and nothing big should happen until the parties hold their conventions in July. Then again, it’s a strange election, so who knows what will happen in the next few weeks. 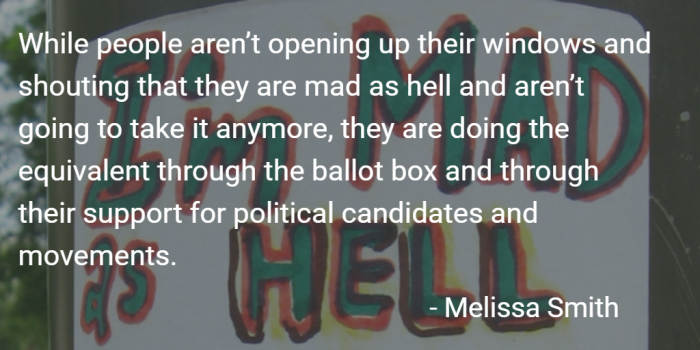 Trump needs to work on fundraising through the summer, unless he wants to throw in more of his own cash. In May, Stanley Hubbard, an American broadcasting millionaire, said he would financially support Trump. This is interesting, because earlier Hubbard gave money to a PAC that was trying to stop Trump. Basically, he seems to have run out of other Republicans to support. He might be the first big-money donor to publicly agree to throw substantial money into the Trump campaign.

What about the mad prophet of the airwaves? There’s little sign that he is making large-scale changes in his messages. He gave a major speech on jobs and trade in late June that attacked globalism and free trade, and he again said that Europe and Asia aren’t paying enough for US military defense. These issues play well with his supporters, many of whom fear that more manufacturing jobs will be moved to other countries and that free trade deals don’t sufficiently protect American interests.

But what it really comes down to is this: many Americans feel like they are no longer in control of their government. In truth, this has never really been the case, but the increasing complexity of global finance, coupled with what they see as a lack of accountability by elected officials, has led to a situation in which they feel a lack of control. This causes fear, and Trump gives a voice to those fears.

Where does Trump go from here? Does he keep tapping into this vein of discontent, or does he tack slightly to the middle and hope to pick up undecided voters? That’s what traditionally happens during the general election. But this is no ordinary election.

But one thing that Trump should keep in mind is that Beale came to an unfortunate end in “Network.” The message resonates for a while, but then people get bored and start looking for other entertainment. Trump will have to keep it fresh to retain the media’s attention and to attract new voters to add onto his core support.

They are mad as hell, and Trump needs to keep them riled up until November. If not, Clinton will be dancing into the White House.