Michael Bloomberg won’t be president, but he has written a new chapter in using personal wealth and influence in US elections

Michael Bloomberg won’t be president, but he has written a new chapter in using personal wealth and influence in US elections

Last week, following a poor Super Tuesday performance, former New York Mayor Michael Bloomberg dropped out of the race for the Democratic presidential nomination. Melissa M. Smith writes that while Bloomberg has proven for now that the presidency can’t be bought by a billionaire, his plans to support former Vice President Joe Biden’s campaign for the nomination does show how money can have a huge influence on elections post Citizens United.

The question of whether the United States presidency can be bought may have been settled, at least for now.

Mike Bloomberg, former Mayor of New York and the latest in a long line of wealthy presidential candidates with outsized egos, decided to call it quits on March 4 after spending almost $600 million to win a whopping 31 pledged delegates. That means he spent roughly $18 million per delegate in his race for president. Even for someone with a personal fortune the size of a small nation, that must seem a bit underwhelming.

In his short three-month presidential campaign, Bloomberg shattered the record for self-funded candidates, surging ahead of fellow Democratic rival (and billionaire) Tom Steyer, who spent a measly $267 million on his failed 2020 bid. Coming in a distant third is the 2016 campaign of President Donald Trump, in which he spent $66 million of his own money.

Bloomberg blew through cash during those three months, spending 70 percent of his budget on advertising, and showering his workers and supporters with money and benefits. He sponsored a food truck that rolled through several college campuses just before Super Tuesday, and, according to several sources, he paid field operatives twice as much as other campaigns. He also provided full healthcare benefits and free housing to many of his workers. He even paid people $6,000 a month to canvas on his behalf, a role traditionally performed by supporters and volunteers.

While he spared no expense in his effort to take down President Donald Trump, Bloomberg couldn’t overcome one of the basic tenets of American politics: Americans don’t generally like millionaires who try to buy their way into the White House, much less billionaires. That road is paved with the names of other wealthy individuals with a healthy sense of entitlement, such as Ross Perot, Steve Forbes, John Kerry, Mitt Romney, and John Huntsman, all of whom walked away a few million dollars poorer for their efforts. Donald Trump is the only one to make it so far, and he has been raising money for four years to fund his re-election campaign, rather than supplement from his personal fortune again.

It’s perfectly legal in the United States for political candidates to spend unlimited amounts of their own money to fund their campaigns. They must file campaign reports with the Federal Election Commission, but no one will stop them from spending as much as they want, because it is considered part of free or “unfettered” speech. What was unusual about Bloomberg is that he was the richest man to ever run for the presidency, and he spent much of his campaign slamming the wealthy. This might have seemed hollow coming from the man who in 2018 said that taking money from the rich was a bigger problem than income equality.

Bloomberg had the highest negatives of any Democratic candidate when he entered the race in late November 2019. He began the race with political baggage, mostly from his time as mayor of New York City, and he confidently stated that he was rolling the dice on his showing in Super Tuesday, when 14 US states and territories held primary elections. After spending half a billion dollars, he managed to win only 5 of the 6 delegates from American Samoa. Former vice president Joe Biden, who won the most states on Super Tuesday, spent just over $2 million on television, radio and digital ads in those states. To be fair, Bloomberg still has ad buys that are playing out in states where the primary votes haven’t occurred, such as Florida, Pennsylvania, Illinois, and Ohio. Of course, he’s no longer a candidate, so they are basically anti-Trump ads at this point. 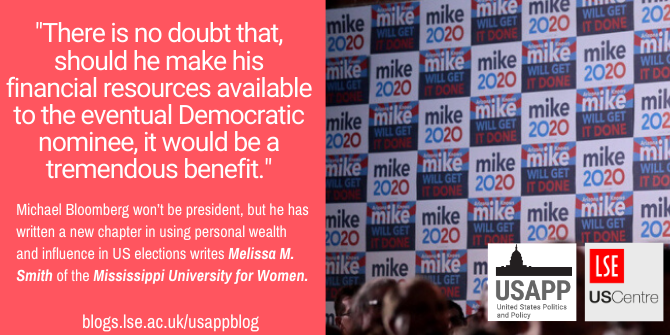 “Mike Bloomberg signs” by Gage Skidmore is licensed under CC BY SA 2.0.

What’s next for Bloomberg in this election?

Which brings us to the question of how Bloomberg will impact the presidential race from this time forward. He has already endorsed Biden, and the day after he left the race, he tweeted his first pro-Biden and anti-Trump message. But what can he do to impact the eventual Democratic nominee, and the general election in the fall?

The short answer is the same as his initial approach: Use his personal money. Federal campaign finance laws allow an individual to donate only $2,800 for a presidential candidate per election. However, that doesn’t mean that Bloomberg will be limited in what he can do for Biden. There are no limits on how much he can spend independently to help Biden, if his organization doesn’t coordinate with the Biden campaign. That means that the ad slots already paid for by Bloomberg could be used to air anti-Trump messages on Biden’s behalf.

Of course, Bloomberg could also use broadcast and digital advertising to slam Bernie Sanders, the only Democratic candidate with a chance to defeat Biden. Would Bloomberg do that to a fellow Democrat? That’s unknown at this point, but it’s clear that Bloomberg feels a more moderate candidate has the best chance of defeating Donald Trump, and that’s the sole reason why he’s dropping large sums of cash into the primary.

Bloomberg’s support of the eventual Democratic nominee would also be free from any type of financial limit, if he once again does not coordinate with the nominee’s campaign. He could form a Super PAC and use it on behalf of the nominee, or he could buy advertising as an individual and use it to bash Trump.

The interesting question, though, is what will become of the political campaign network Bloomberg established across the nation. He had more than 100 offices just in Super Tuesday states, and he has campaign workers across the country, even in some western states that often get overlooked by presidential candidates, such as Idaho and Wyoming. What will become of those staffers is so far unclear, as Bloomberg has yet to announce what he will make available to Biden. It is possible that he could keep those campaign offices open and use them on behalf of the Biden campaign, but the expenses would have to be paid for by Bloomberg, and, once again, operated independently of the Biden organization.

This would no doubt be a huge boost for Biden in the primaries and, should he be the nominee, in the general election. It would not be a cheap option for Bloomberg, but he has vowed to do “whatever it takes” to defeat Trump in November. “I’ve always believed that defeating Donald Trump starts with uniting behind the candidate with the best shot to do it, and after yesterday’s vote it is clear that candidate is my friend and a great American: Joe Biden,” Bloomberg told supporters the day he withdrew from the race. It seems that once it became obvious that Bloomberg wasn’t going to be the nominee, he decided to be the kingmaker instead of the king.

There is no doubt that, should he make his financial resources available to the eventual Democratic nominee, it would be a tremendous benefit. The Democratic Party has been lagging behind Republicans in fundraising, and the prospect of a brokered convention is troubling, as it would probably not lead to a united party. One way to potentially avoid that would be to place resources behind Joe Biden and propel him to the nomination before the convention. While progressive voters might not be happy that Sanders wasn’t the candidate, they might be more inclined to line up behind Biden, who would be their best shot at defeating Trump.

It is interesting to see the Democratic Party embracing individual donors with mega-millions to donate. When Citizens United v. FEC was decided by the Supreme Court in 2010, there was no lack of hand-wringing by the leading Democrats, including President Barack Obama, who said the ruling gave “special interest lobbyists new leverage to spend millions on advertising to persuade elected officials to vote their way — or to punish those who don’t.” He went on to say, “The last thing we need to do is hand more influence to the lobbyists in Washington or more power to the special interests to tip the outcome of elections.”

Since swapping from the Republican to the Democratic Party in 2018, Bloomberg has not been shy about spending his money on party politics. In 2018, Bloomberg’s Independence USA PAC gave $110 million to help Democrats win House seats. In 2019, he gave $10 million to the House Majority PAC, $300,000 to the Democratic National Committee, and $10,000 each to state Democratic parties across the country. Now, the ninth richest man in the world is spending millions to get Joe Biden into the White House.

Will his strategy succeed? The next few weeks will be interesting to watch, as will Bloomberg’s eventual influence on other millionaires who are interested in paying their own way into the White House. Whether he succeeds or fails, Bloomberg has already written a new chapter in how to use your own money to influence elections.

Melissa M. Smith – Mississippi University for Women
Melissa M. Smith is an Associate Professor and the Gibbons Chair of Journalism in the Department of Communication at Mississippi University for Women. Her research focuses on US elections, particularly campaign finance reform. Her work has appeared in several journals, and she is the co-author of two books, Campaign Finance Reform: The Political Shell Game, and Dark Money, Super PACs, and the 2012 Election, both published by Lexington Books. Her next book will be Third Parties, Outsiders & Renegades: Modern Challenges to the Two-Party System in Presidential Elections, also published by Lexington.