For decades, the US has used sanctions against countries and regimes where they seek to encourage change. But what determines whether or not the US imposes sanctions in the first place? In new research that examines more than 50 years of sanctions, Timothy M. Peterson finds that sanctions are more likely to be imposed against countries with poor allies that will not be able to step in with economic assistance. As the target country’s allies become wealthier, it is less likely that sanctions will be put in place.

As of August, 2016, the United States maintains 28 active sanctions programs, restricting the ability of US citizens to engage in commerce with countries, organizations, and individuals throughout the world. However, it is not fully understood why developed states such as the US use sanctions in response to a wide range of problems—including support for terrorism, nuclear proliferation, and repression of human rights and democracy—when this foreign policy tool often appears ineffective at coercing target states to change these proscribed behaviors.

In a recent study, my coauthor, Dursun Peksen, and I look at how the decision to use sanctions could follow from US policy-maker views of their expected effects. While a target country’s cooperation with US demands is a primary aim of sanctions, we contend that target concessions are not necessarily the only outcome favorable to policy-makers. We argue that the ability of a state targeted by US sanctions to mitigate the costs of lost US commerce—and particularly the ability of sanctioned countries to replace lost US trade, aid, or investment with new ties to third-party states—is a key consideration from the perspective of US policymakers.

The case of Soviet Russia’s increasing economic relations with Cuba during the Cold War is a well-known example of a third-party “black-knight” stepping in to replace lost commerce in the aftermath of US sanctions. In response to comprehensive US sanctions imposed in the early 1960s with the goal of destabilizing Castro’s regime, Soviet Russia increased its trade ties with Cuba and provided economic and military aid to the communist Cuban regime in order to undermine unilateral US sanctions. The Russians were motivated to prevent Castro’s regime from weakening as a consequence of sanctions as part of a strategy to facilitate the global spread of communist ideology. However, similar “sanctions busting” behavior could instead be commercially motivated; third-party countries could seek merely to capture new trade and other economic opportunities in sanctioned states in order to profit as the US restricts economic ties. Regardless of whether third parties are motivated by the black-knight effect or merely from opportunistic rent-seeking, the expected result of their sanction-busting behavior could be a lower ultimate cost of sanctions to the targeted country.

Conversely, redirecting lost trade to new markets could be costly for some states targeted by sanctions; and, in some cases, a sanctioned state could be left with few or no alternate markets and products. Importantly, high sanction costs do not guarantee that a sanctioned country will change its ways; targeted states must weigh the cost of enduring sanctions against the cost of compliance with US demands. Yet, if the targeted country faces high costs associated with economic restrictions, US policy-makers could expect a (reasonably) favorable outcome regardless of whether the target changes its proscribed behavior. While target country concessions provide a clear foreign policy “victory,” continued target resistance often inflicts hardship upon target leaders, which could serve strategic US foreign policy goals by demonstrating the negative consequences associated with violating international norms. Costly imposed sanctions also highlight the consequences of resisting US coercion, potentially motivating other countries to avoid a similar fate.

We contend that the US will be less likely to levy sanctions when policy-makers perceive that the targeted country could more easily mitigate the anticipated costs by redirecting lost trade and receiving economic assistance from third-party states. This expectation follows because sanctions that the targeted country mitigates easily will reflect failure by the US to meet any of the goals listed above: the target state would not concede to US demands; and a toothless sanction would signal that the US is unable sufficiently to punish countries acting contrary to its will. Indeed, in this case, the US will have imposed sanction costs on itself with no appreciable gain. Worse still, the US might further harm its security interests by facilitating the emergence of closer political ties between the sanctioned state and its new economic partners that emerged to replace economic ties. We also contend that the sanctioned states that could most easily mitigate US sanctions are those with more, wealthier allies—third-party states that are both willing and able to step in when the US restricts economic ties.

We used data on US sanction threats and impositions between 1950 and 2005 to test our expectations. Figure 1 shows the probability (on the y-axis) that the US imposes sanctions against a country that has resisted its initial sanction threats, conditional on the combined gross domestic product (as a proportion of global GDP) of the potential target country’s allies (on the x-axis).

As the figure shows, we find that when the target country’s allies are very poor (or the target has no allies), the US imposes sanctions over 40 percent of the time (probability = 0.44). However, as the target’s allies become wealthier (i.e., as their summed GDP increases as a proportion of global GDP), this probability diminishes towards zero. Indeed, this probability loses statistical significance when target ally GDP reaches approximately 15 percent of global GDP.

Figure 1 – Target ally wealth and the probability of sanction imposition, with 95% confidence bounds 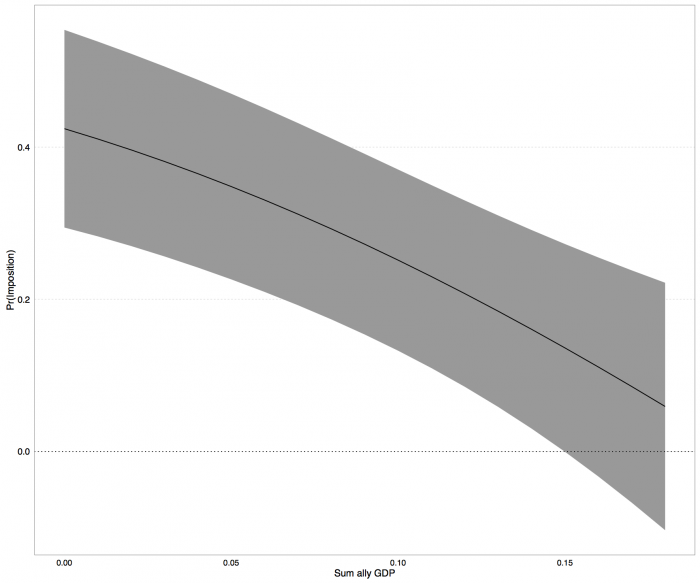 Our findings suggest that US policy-makers are more likely to impose sanctions that cannot be shrugged off easily, yet hesitate when imposed sanctions could convey a signal that the US is impotent to punish countries that defy it. Of course, target insulation from sanction costs does not guarantee that US policy-makers will back down from imposing economic restrictions (as illustrated by the case of Cuba). There are a variety of factors—including, notably, pressure from domestic US interest groups—that influence US sanctions policy. Yet, the results of our analysis highlight one reason why US policy-makers would impose sanctions that might appear, at first glance, to be ineffective. Imposed sanctions amid continued target defiance serve a broader strategic purpose; and “successful” economic coercion is not necessarily synonymous with acquiescence by targeted countries to US demands. Even when sanctioned states remain resistant, sanctions potentially could motivate broader compliance with international norms (and US preferences).

This article is based on the paper, ‘Sanctions and Alternate Markets How Trade and Alliances Affect the Onset of Economic Coercion’ in Political Research Quarterly.

Timothy M. Peterson – University of South Carolina
Timothy M. Peterson is an Associate Professor and Director of Graduate Studies in the Department of Political Science at the University of South Carolina. His research links the fields of international political economy, foreign policy, international conflict, and human rights.