Now that the imminent danger of a Donald Trump victory in November is not so imminent, Rajesh Venugopal writes that perhaps now we can look beyond the fear and outrage to reflect on the legacy that Trump’s candidacy leaves behind.

Let us for a minute leave aside the alarm, anger and anxiety about Donald Trump’s bizarre presidential campaign. The Donald’s unutterable utterances, his repulsive personal conduct, his embodiment of a Batman villain, his extraordinary combination of arrogance and ignorance, and the persistent rumours that he is some kind of Manchurian candidate all make it horrifying to imagine that he might ever ascend to the most powerful office in the world.

But the reality is that his candidacy is doomed. Barring some devastating eleventh hour shock from Wikileaks, the odds that Trump will become the 45th president of the US are very low. And now that this imminent danger is not so imminent, perhaps we can look beyond the fear and outrage to reflect on the legacy that the Trump candidacy leaves behind.

David Keen, the scholar of modern war, has argued persuasively that there is more to war than winning and that it is important to look for its hidden functions. In this spirit, let us try to go beyond the manifest awfulness of the Trump campaign, and examine what functions it has served, what legacies it leaves behind and what it reveals.

Firstly, Trump should be given the credit for giving the US its first woman president. Hillary Clinton, with her extraordinarily high negative ratings, could have quite simply not won an election against any ‘normal’ Republican candidate like John McCain, Mitt Romney or even Jeb Bush. The reasons for this are many, but plain old fashioned misogyny is a large part of it. The only way Clinton can win is if her opponent is someone as appalling as Trump – that is, someone with even worse negative ratings. Trump systematically eliminated every electable Republican candidate in the primaries and has since gone on to run a campaign that is so chaotic and hateful that it has terrified large numbers of voters into uniting behind Clinton as the only viable, sane alternative. Former Clinton antagonists and doubters from the left and right are now solidly behind her and will, despite their misgivings, help her to break that glass ceiling and become president. None of this would have been possible without Trump’s timely intervention: America owes him that.

Secondly, and no less importantly, we should be very grateful to Trump for saving the US and the world from the only slightly less noxious and dangerous Ted Cruz. Lest anyone forgets, Cruz was the runner-up to Trump in the primaries. He was the furthest to the right among the Republican candidates on virtually every issue: healthcare, gun control, reproductive rights, minority rights and LGBT rights. Cruz famously demanded that the police should ‘patrol and secure’ Muslim neighbourhoods. With greater powers of coherent thought and articulate speech, authentic roots in the conservative base, a Latino background and depth of legislative experience, Cruz would have provided a far more serious challenge to Clinton. Although significant sections of the Republican leadership detest Cruz, he would not have divided and hamstrung the party in the way that Trump has. More importantly, he would not have alienated key demographic segments such as women or Latinos or the college educated. If elected, Cruz would have been the most right-wing president in living memory and would have enjoyed the support of a Republican Congress. Remember – Trump took a bullet for the world and saved us from this man. 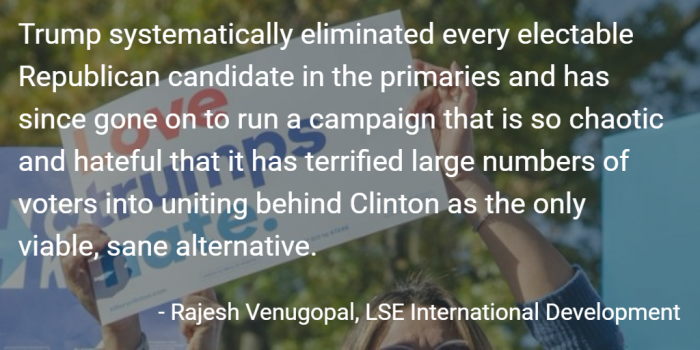 Thirdly, there is former US President George W. Bush to consider. The Bush clan is reportedly so incensed at the crushing defeat that Trump inflicted on ‘low energy’ Jeb, that they have decided to do the unthinkable, and vote for Clinton. Nevertheless, the fact is that they bear an enormous unacknowledged debt to Trump. Eight years ago, Dubya left the White House as a deeply unpopular president. He was ridiculed and reviled at home and abroad as an icon of stupidity, as the man responsible for the wilful deception and criminal invasion of Iraq. But, eight years later, as Iraq continues to burn, that has changed and he is no longer the most ridiculous and odious Republican leader ever. Trump has robbed him of that mantle, and lowered the bar to such an extent that it has rescued Dubya and helped him rehabilitate his standing. Quietly and without fanfare, the public image of the former president has been redefined from that of a bumbling, ignorant, trigger-happy, far-right, oil-industry buffoon, to an avuncular, statesmanlike, old-school conservative. The Bushes may never concede this, but it could never have happened without the Donald.

Finally, the Trump candidacy has helped us understand much about the character and sense of judgment of public figures around the world. Who is it that would, after all they know, still endorse and publicly stand with Trump? McCain, Cruz, Chris Christie and a long, illustrious list of Republican grandees who have been personally insulted by Trump, have nevertheless, through gritted teeth, gone on to support him. That says a lot about them. But it is the long list of uncoerced endorsements that is more revealing. Trump has smoked out a vast and colourful assortment of reactionaries, fruitcakes and 1980s B-list action-movie heroes around the world, all of whom have somehow found cause to admire him. In the US, apart from Chuck Norris, Steven Seagal and Jean-Claude Van Damme, the best known Trump endorser outside the Republican party is the Holocaust denier and former Ku Klux Klan leader, David Duke. In France, it is far-right presidential candidate Marine Le Pen. In Hungary, there is Viktor Orban. In India, unsurprisingly, it is Subramaniam Swamy. In Britain, the well-known xenophobe and Trump wannabe Nigel Farage was joined by ruling Conservative party MPs Jacob Rees-Mogg, Michael Fabricant and Iain Duncan-Smith. To their credit, some of these people have qualified their support and stepped back from the precipice after the Billy Bush video. But even still, one wonders what it was that they saw in Trump before that unsurprising revelation?

Even in failure, Trump’s accomplishment for now and for posterity is that he has helped us learn a little more about the political make-up, the moral depth and the colossal lack of judgment of these figures. For this and for all the rest, we must be grateful and must, however reluctantly, learn to stop worrying and appreciate what Trump’s dying campaign has left behind for us.

A version of this article originally appeared at The Wire.