On August 9th, an unarmed 18-year old Black teenager, Michael Brown, was shot by a police officer in Ferguson, a suburb of St Louis. The following two weeks saw protests and riots in the town, culminating in the Governor of Missouri calling in the National Guard on August 18th. Tim Newburn takes a close look at the unrest in Ferguson, writing that it has parallels with similar riots in London in August, 2011. Both were sparked by the oppressive policing of black neighborhoods, but the most distinctive feature of the unrest in Ferguson was the militarized nature and reaction of local police forces.

St Louis, Missouri, doesn’t have much of a history of rioting. In the major urban disorders of the 1960s, the city was relatively peaceful. The decades since, which have seen riots in cities as widespread as Washington DC, Albuquerque, Baltimore, Miami, Detroit, Los Angeles and New York among many others – St Louis barely figured. And, then, in August 2014 all this changed. The St Louis suburb of Ferguson – one of over 90 municipalities in St Louis County – saw sustained disorder lasting longer than the Los Angeles riots that broke out in the aftermath of the Rodney King affair.

In some ways the story is an all too familiar one. In Ferguson, a young, unarmed African American man, Michael Brown, was shot and killed by the police. In truth, this is not such an unusual occurrence in America. At least four such incidents occurred in the US in the month leading up to the shooting of Michael Brown. Although the number of citizens shot and killed by the police has declined significantly in the last half century, there were over 4,300 such deaths between 1999 and 2011.

In Ferguson, however, what followed the shooting was at least as great an impetus to the disorder. First, Michael Brown’s body lay in the street for four hours before the authorities finally moved it. It lay uncovered and in full view for a considerable period and whilst there have been some mitigating circumstances it is of little surprise that locals took this to be supremely disrespectful. Later that evening, once the body had been removed, a temporary memorial of flowers, candles and photographs was established. The police blocked vehicle access to the street in which the incident had occurred, but allowed their own cars to enter, several of which drove over the memorial, crushing the flowers and breaking the candles. The final indignity occurred when a police officer allowed the dog he was controlling urinate on the memorial.

Much of this terrible tale is all too familiar to anyone familiar with the English riots of 2011. Then, a young Black man, Mark Duggan, was shot and killed by the police in North London. It was 48 hours before rioting broke out, but in the intervening period feelings had been inflamed by what was perceived to be a failure to treat Duggan’s family with appropriate respect, and mishandling of the protests that gathered outside the local police station. In addition, a series of claims about Duggan’s actions (that, for example, he had fired a gun at the police) or character (that he was a ‘gangster’), many of them subsequently discredited, were made by the authorities, all of which convinced many that there would be little chance of ‘justice’ being done.

Very much in parallel with the Duggan case, in the aftermath of the Michael Brown shooting in Ferguson an information war also quickly began. First of all the police released details, including stills from a surveillance camera, of a convenience store ‘robbery’ that had occurred just before the shooting. They suggested that Brown had both been involved and implied that this might help explain the subsequent shooting. It later emerged that the officer who shot Brown had no idea he might be implicated in the theft from the store. The police then released details from the initial autopsy conducted on Brown, suggesting that he had traces of cannabis in his bloodstream. As in the Duggan case it appeared that strenuous efforts were being taken to divert attention from the shooting itself. 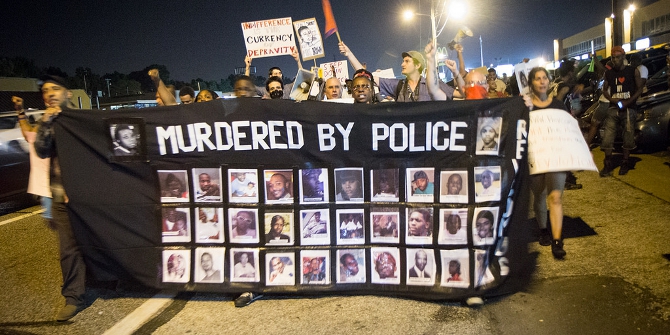 The rioting on both sides of the Atlantic in many ways took standard forms. In Ferguson, Missouri, as in London, Birmingham, Manchester and elsewhere, the disorder involved attacks on police, quite widespread destruction of property, and the looting of local stores – though the latter was significantly more extensive in some of the English riots. When asked about their frustrations, young St Louis residents complained about police ‘harassment’, and stop and frisk in particular, very much as rioters regularly complained about stop and search to researchers in the Guardian and LSE’s Reading the Riots study in England. In Ferguson, there were even stories – many circulating via social media – of ‘vigilante’ business owners in Ferguson taking to the streets to protect their shops, rather as happened in parts of north London and in Birmingham in 2011.

But to some extent there the parallels end. First, Ferguson was centrally about race in a way that was only partly true of the England riots of 2011. It was indisputably the case that a great many black Britons were involved in the 2011 disturbances, and many of the ‘rioters’ interviewed in Reading the Riots talked about racism and the discrimination they faced, particularly from the police. And yet the English riots were defined at least as much by poverty and disadvantage as they were about race. To that extent, arguably Ferguson has stronger resonances with St Pauls, Brixton, Toxteth and the other British urban disorders of the 1980s, where predominantly black neighborhoods rose up against what had long been experienced as oppressive policing.

The starkest contrast from a British perspective, however, was to be found in the pictures of highly militarized policing in Ferguson. CS gas, stun grenades, rubber bullets, camouflage uniforms, snipers on roofs, armored cars, assault rifles pointed directly at residents and journalists, shotguns and automatic weapons appeared to be almost daily presences on the streets of St Louis. This drift toward ever-greater militarization of American policing has been in evidence for several decades now, but has sped up since 1997 as a result of the flow of surplus equipment made available by the US Department of Defense. Further, it is argued that since the September 11th attacks, the US government has increasingly viewed the police ‘as frontline forces in a new war’.

Civil unrest often places police forces under the very greatest strain. In 2011, even London’s Metropolitan Police, far and away the largest force in the UK, had to utilize the mutual aid system to call on assistance from other forces, and still struggled in the early days of the riots. The situation in somewhere like St Louis contrasts greatly, given the thousands of Police Departments in the US compared to only 39 in England.

Ferguson’s Police Department has fewer than 100 officers. They were initially supplemented by officers from neighboring forces and by the St Louis County PD. The initial mishandling of the riots by these Departments led to responsibility being passed, temporarily, to the Missouri Highway Patrol. They had some initial successes, and were widely praised by citizens and professional police observers. Nevertheless, concerns about intensifying violence led the State Governor eventually to call in the Missouri National Guard – essentially a reserve military service – to police Ferguson. It was almost two weeks of unrest before the Governor finally felt able to withdraw the National Guard.

What next? There is a Federal Civil Rights investigation being undertaken at the instigation of Attorney General Eric H. Holder Jr., and a local Grand Jury will decide whether the officer that shot Michael Brown will face charges. There has been vocal and sometimes bipartisan criticism of the style of militarized policing that was visible in Ferguson, and has been seen in many cities in the US, and President Obama has ordered a review of the programs that supplied the police with much of this equipment. Nevertheless, as one commentator put it, it is the promiscuous – for which read routine and all too frequent – use of SWAT teams that remains a significant problem in much American urban policing.

What about the UK? Here there are also reasons to be cautious. Much of the history of modern civil unrest suggests that a combination of firm but proportionate policing with serious engagement with the community generally holds out the greatest promise of success. Such lessons have been learned the hard way – from Los Angeles and Cincinnati to Brixton and Toxteth. Although some efforts were taken to learn some of the lessons from the 2011 riots, the febrile political atmosphere that currently surrounds policing is far from healthy, and the spectacle earlier this year of London’s Mayor, Boris Johnson, rushing ahead to buy water cannon before the Home Secretary had authorized the use of such equipment, is hardly an illustration of careful political strategy and management. We must continue to hope that our political leaders will show restraint where policing is concerned.

But it is far from all doom and gloom. Yes, there were significant mistakes in the policing of the 2011 riots, and there was very great criticism of the police from politicians and the public.  Nevertheless, the types of over-reaction and escalation that were the hallmark of much of the policing of the disorder in Ferguson were not generally among the criticisms made of British policing in 2011. At the very least that is something positive to hang on to.

This piece is a revised and expanded version of an article that first appeared at the Guardian.