In neighborhoods that struggle economically, supporting community cohesion is key to the formation of Business Improvement Districts

In neighborhoods that struggle economically, supporting community cohesion is key to the formation of Business Improvement Districts

Businesse Improvement Districts or BIDs have become an important part of most downtown areas in US cities, having beneficial impacts on crime rates and property values. But, if BIDs are so beneficial, then why do some not emerge in certain neighborhoods? In a new study on BID formation in Los Angeles, Wonhyung Lee finds that poorer communities and those with a larger foreign born population are more likely to struggle to form BIDs. She writes that public officials and community workers may need to assess the level of collective vision and action before trying to form BIDs in these neighborhoods.

Almost all major cities and downtown areas in the United States have business improvement districts (BIDs) or their equivalent. As of 2011, over 1,000 BIDs exist across the states according to the International Downtown Association. BID services are associated with “clean and safe” programs mostly involving street cleaning and security, and have goals and services to make their districts more attractive, friendly, and accessible. BIDs have worked well over the last two decades in reducing trash, graffiti, and deteriorated sidewalks as well as crime rate and youth violence. Additionally, BIDs increase property values and business transactions and promote residential development.

Despite the effectiveness of BIDs, not every commercial area forms one. An important characteristic of BIDs is their autonomy in how they form. BIDs are neither assigned nor planned by the government; they are formed when the stakeholders in commercial areas (i.e., mostly property owners or business owners) are happy to work together to address collective problems, and to pay additional fees. In order to form BIDs, property or business owners must collect a considerable percentage of petitions. BID formation thus involves extensive outreach, persuasion, and negotiation efforts among stakeholders, which require prohibitive time, money, and human resources. Once a BID is established, all property or business owners within the delineated BID area pay assessment fees, and the advisory board or board of directors, which are made up of stakeholders, makes decisions about the budget and activities of BIDs.

Considering the level of effort required for business improvement districts to form, the internal dynamics of neighborhoods merit consideration when it comes to discussing why some BID’s don’t come into being. My research in Los Angeles examined the areas that have shown inconclusive BID formation efforts, and the types of challenges that these neighborhoods experience in order to form BIDs. First, I identified cases of neighborhoods that have started but not completed BID formation even after several years, when on average, BID formation takes between 18 and 22 months. Since the progress of these cases is poorly understood, I categorized them as “unidentified” proposed districts in Figure 1.

Figure 1 – Existing BIDs and the areas with inconclusive BID formation in Los Angeles, 2014 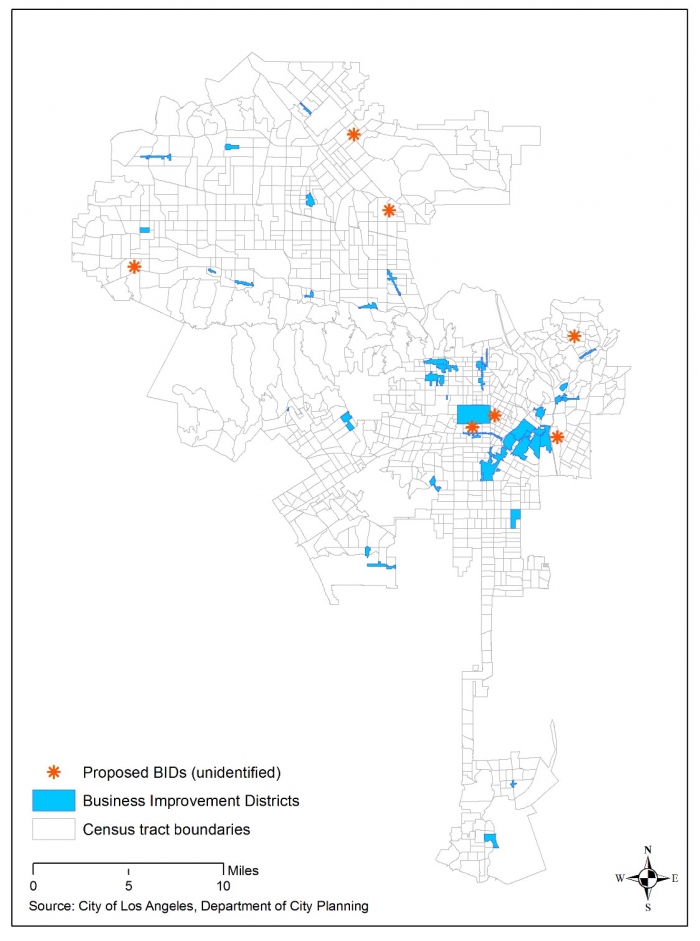 Based on census data, these “unidentified” districts turned out to be neighborhoods with relatively lower income and a higher percentage of foreign-born populations compared to the city average and the areas with established BIDs. The distinctive characteristics of these neighborhoods prompted questions about the challenges they experience to form BIDs. In order to understand why they struggle, I conducted in-depth interviews with city employees, BID consultants, and several BID executive directors, those who had knowledge about BIDs or the neighborhoods that have shown slow BID formation processes.

In short, these “unidentified” cases revealed challenges with engaging property owners and with organizing collective action in their communities. More specifically, property owners are difficult to engage when the BID is introduced from outside the community and when neighborhoods experience high absentee ownership and struggling businesses. In addition, several characteristics of immigrant communities could hinder organizing collective action. For example, interviewees discussed immigrants’ skepticism towards government, spatial conflicts among multiple ethnic groups, and the presence of informal economic activities as potential hindrances to BID formation.

My findings have important implications for understanding economically marginalized and ethnically diverse neighborhoods that do not have BIDs. It is important to acknowledge that “areas without BIDs” do not necessarily equate to “areas with no problems.” As demonstrated in my work, some areas do not have BIDs despite attempts to form them. The consequences can be severe. If neighborhoods fail to form BIDs without alternative measures to deal with collective problems (e.g., trash, crime), those neighborhoods face potential risks for absolute and relative deterioration. The imbalance can result in concentrations of undesirable elements in relatively more vulnerable areas that are socio-economically marginalized and politically apathetic.

To support these neighborhoods, the first critical step to remember is to create a collective vision for the community and engaging the right groups that would benefit from BID formation. Public officials and community workers can assist these neighborhoods by providing direct assistance for raising awareness of collective problems and developing a collective motivation to solve them. Given that many of these neighborhoods tend to have highly concentrated foreign-born populations and potentially conflicts among multiethnic groups, community meetings or social events that can raise awareness of cultural diversity and mutual benefit can also facilitate the first step of BID formation.

On the other hand, it will be important to check the suitability of BIDs. It is possible that BIDs may not be a universal solution for all communities. More research is needed to examine the cases in which communities have developed mechanisms other than BIDs to protect businesses and improve business environments. This line of research can shed more light on community development practices that can be effective either when communities are not ready to establish a BID or when they prefer alternatives to improve their business environment. Public officials and community workers should carefully examine the suitability of a BID before determining the direction of the community development or organizing because certain neighborhoods could be better served with alternative or incremental approaches (e.g., merchant associations, residents’ action group) that can incorporate voices from local merchants and residents more directly.

This article is based on the paper, ‘Struggles to form business improvement districts (BIDs) in Los Angeles’, in Urban Studies.

Wonhyung Lee – University at Albany, State University of New York
Wonhyung Lee is an Assistant Professor at the School of Social Welfare of the University at Albany, State University of New York. With her background in social work and urban planning, her research centers on community development and engagement, with an emphasis on the improvement of commercial areas in low-income neighborhoods. Dr. Lee is also interested in the role of the business community in delivering human services. Some of her current projects concern homelessness, food access, and microlending in a neighborhood context.