In Dark Money: The Hidden History of the Billionaires Behind the Rise of the Radical Right, investigative journalist Jane Mayer reveals how a elite group of plutocrats have effectively subjected the US political system to a process akin to corporate capture. This is a thorough, meticulously researched and compelling account of the financial takeover of US democracy that unveils the otherwise hidden influence of the billionaire class, writes Peter Carrol.

Dark Money: The Hidden History of the Billionaires behind the Rise of the Radical Right. Jane Mayer. Penguin. 2016. 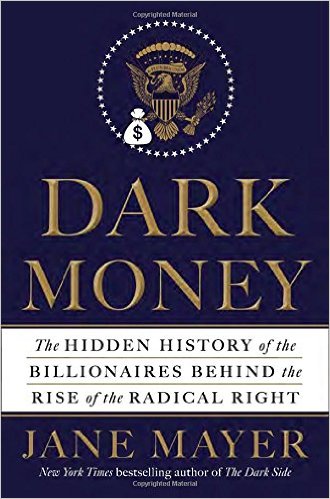 American Carnage: How Free-Market Capitalism is Destroying the USA

One of the most startling statistics from the 2016 US presidential election was that the estimated total campaign spend of $6.8 billion was double the expenditure of the 2012 contest. An estimated $1 billion of this amount came from a few shadowy billionaires backing the Republican Party, equalling the total raised by the millions of individual donations from private citizens.

Jane Mayer, a writer for New Yorker magazine who specialises in long-form investigative journalism, convincingly builds a case that US democracy has been systematically undermined by this small group of extremely wealthy men who are driven by greed and self-interest, effectively subjecting politics to corporate capture.

The opaque nature of political finance in America means that unravelling the complex web of the super-wealthy’s influence – or, as former president Barack Obama described it, the ‘unlimited, untraceable spending […] hiding behind non-profit front groups and public relations agencies’ – is a vast challenge. Dark Money: The Hidden History of the Billionaires behind the Rise of the Radical Right meets the task emphatically, meticulously investigating the cast of characters that Mayer argues are debasing the political system.

Central to Mayer’s examination are the lives and careers of Charles and David Koch, commonly known as the Koch brothers. Following their father’s death in 1967, they inherited the family’s company alongside siblings Bill and Fred, eventually buying them out in 1980. Charles and David expanded their father’s primary businesses of oil pipelines and refineries by diversifying into lumber and paper, coal, chemicals, commodities and futures trading, turning the Wichita-based Koch Industries into the second largest private company in the USA.

The Koch brothers were locked in litigation battles with Bill and Fred for 35 years after the buyout, with their brothers accusing them of undervaluing the company and cheating them out of their inheritance. The two sets of siblings remained estranged for the rest of their lives, and in 1990, Mayer reports that they did not even exchange a single word at their mother’s funeral.

The Kochs were heavily influenced in the 1960s by a selective reading of the influential economist and late LSE lecturer Friedrich Hayek, coming to the view that completely free markets were key to economic prosperity and individual liberty. As they have accumulated vast wealth over the course of their career, the brothers’ political doctrine appears to have hardened, developing into a strain of conservative libertarian politics described by William Buckley Jr. as ‘anarco-totalitarianism’. 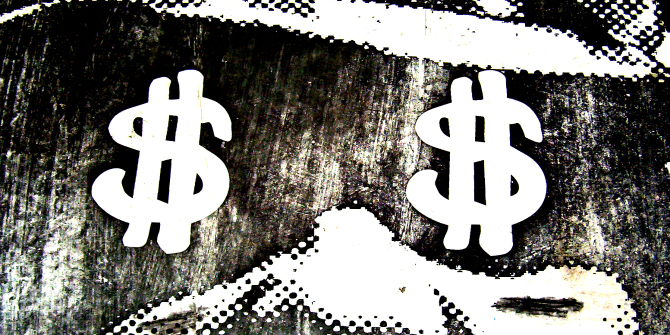 While their individual wealth would give them huge power on their own, the Koch brothers have intensified their political influence by joining forces with a select group of like-minded political allies, many of whom are also part of the multibillionaire club. While the Kochs may disagree with their peers on a range of political issues, the glue that binds them all together is antipathy towards government regulation and taxation, especially when it directly affects their own personal wealth .Their ultimate goal, Mayer argues, is to remake the USA along the lines of their radical free-market beliefs, destroying the post-war consensus of market socialism and strong government which led to decreasing economic inequality and high levels of social mobility in the post-war decades until the 1980s.

The Kochs and their allies have bankrolled myriad political vehicles to achieve their objectives, often giving them innocent-sounding names like ‘Citizens for a Sound Economy’ and ‘Americans for Prosperity’. The organisations – which appear to be mere public relations outfits masquerading as think-tanks or civil action groups – have developed seemingly common-sense rationales to entrench their anti-tax, anti-government and anti-regulation message into the public consciousness.

While it is impossible to know exactly how influential the Kochs and their partners have been in changing public opinion, Mayer concedes, she notes that as recently as the early 1980s, many of their ideas were consigned to the fringes of US politics. Mayer cites recent polling that suggests America’s distrust in government has now surpassed that shown towards business, and the group’s anti-government outlook is also now firmly lodged at the centre of the Republican Party.

It would be unfair to describe the Kochs as political ideologues, however. While they claim to be steadfast in their opposition to any government intervention, they displayed remarkable intellectual flexibility when the bottom fell out of the stock market during the ‘Great Recession’ of 2008-10, threatening their vast investment portfolio. ‘Americans for Prosperity’ quickly offered its full support to the Obama administration’s Troubled Asset Relief Program (TARP), an emergency government economic stimulus package that amounted to a massive government bailout to corporations on the brink of bankruptcy.

While much of Dark Money is focused on the activities and lives of the Kochs, Mayer also takes a wide lensed, historical view of the origins of the financial takeover of US politics. After John D. Rockefeller unsuccessfully lobbied President Teddy Roosevelt’s early twentieth-century administration for amendments to federal tax law, changes at New York’s state-level legislature in the 1920s eventually led to the creation of the Rockefeller foundation.

Rockefeller’s changes meant that ‘philanthropic’ activity became a tax-deductible expense: if a US citizen wants to donate $1 million to a ‘charity’ of their choosing, they can then deduct this amount from their tax bill. The definition of philanthropic activity is so broad that in effect it becomes a choice between paying taxes or donating to a cause, creating what Mayer describes as ‘weaponised philanthropy’.

Over the past century these groups, run with little transparency or accountability, have multiplied from the single Rockefeller foundation: by 2013, there were over 100,000 private foundations in the USA with assets of over $800 billion. The 2010 Supreme Court’s ‘Citizens United’ decision to remove restrictions on political spending by private individuals sent the amount of money being pumped into US politics into the stratosphere, creating what Professor Jeffrey Winters of Northwestern University describes as a ‘civil oligarchy’ in the twenty-first century.

Mayer also focuses on the personal stories and ecological degradation that are the collateral damage of the Kochs’ blatant and cynical disregard for environmental laws. Most readers are likely to be deeply disturbed by the level of collusion between Republicans and the oil industry to kill off burgeoning domestic and international climate change regulations. In 2010, David Koch, an 80-year-old man, brushed off an interview question on the environmental damage wrought by his companies, suggesting that rising temperatures would increase the arable land available to humans, while the Koch’s in-house newsletter has argued that the enforced innovation that climate change brings will actually be beneficial to the human race in forcing us to adapt to the changed circumstances.

The case Mayer builds against the billionaire class is comprehensive and extremely depressing. While the Kochs – greedy, selfish and showing a complete lack of humanity – often feel underserving recipients of such a rich portrayal, readers are constantly reminded of the social consequences of the carnage they and their peers have inflicted on US society. A minor weakness of the book is that Mayer’s commitment to impugning their characters means that critical quotes are occasionally taken from less-than-authoritative sources. And Dark Money, which so focuses on the anarco-capitalism of the Republican Party’s backers, may also have benefited from balance by some accounts of the positive (and negative) impact of tax-deductible philanthropy from supporters of the Democrat party.

These minor flaws should not distract from Mayer’s achievement: a thorough and compelling case study of how US democratic life is being delegitimised and undermined by the ideology of a tiny proportion of its society. How their pursuit of wealth has turned families into estranged, warring factions. How it has destroyed the majority of US citizens’ faith in government to improve their lives. How their wanton disregard for human life and the environment in their pursuit of profit has led to the deaths and misery of millions of individuals around the world. And how their free-market capitalist ideology is leading to the ruin of the USA.

Amendment: The review was amended on 20 March 2017. The original post referred to ‘Nelson Rockefeller’; this has since been amended to read ‘John D. Rockefeller’.